My friend, David, who helped me design the rig, sailed in from Tasmania a few weeks ago and has been nobly helping me with various projects. Paul, in whose workshop I built the rig, came down for a visit so that we could take the two boats out sailing; we had a huge amount of fun.


I took a load of photos of Tystie, but then I gave them to David and forgot to keep copies for myself, so can't put any on this post.

We left from Mot with a N wind, which means a headwind up to the Abel Tasman Park, where we were headed.  However, it meant we could run down to the bar together 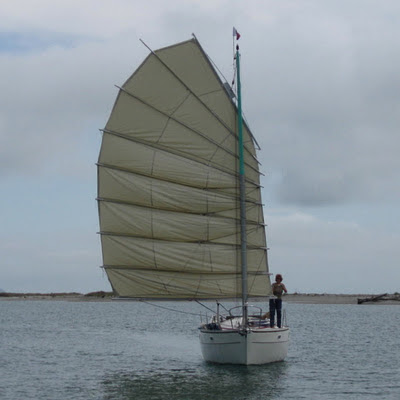 After we crossed the bar and headed offshore, Tystie vanished over the horizon.  We plodded on, close-hauled to Adele, with only just enough wind.  I lashed the helm and really enjoyed the sail - for once there was enough wind to get the whole way without resorting to power.  It has to be said that Fantail sails really well to windward - it's nice to have a boat that actually makes progress when beating!

Both boats spent the night anchored of Adele I and in the morning, David and Paul came aboard Fantail. 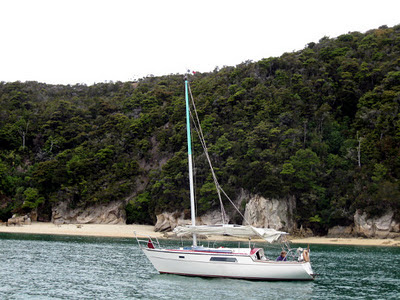 David tweaked some of the control lines to his satisfaction, and then we took her out sailing.   David had lots of fun sailing her - she is so light and responsive compared with his ocean-cruising 35 footer and he was delighted at how the sail has turned out.  We have altered the lead of the running luff parrel and the sail is setting properly now.  Only one Honk Kong parrel left and I think this can come off.   I'm pleased about that because I think they stress the rig.

The wind was up to about F5 at times and David carried on with more sail than I would have.  But she stood up to it, which is more than you can say for me!  But it was good to try things out.

When we came back I had to put them back on Tystie and with the fresh wind eddying around and the boat swinging at anchor to the tidal swirls, it wasn't easy, but apart from a few bruises, I don't think there was any damage.

The following day we sailed up to Anchorage in company.  I left first, the sun shining but not much wind.  I motored up out of the roadstead to get enough breeze to sail with and carried sail right into anchor.  Tystie came in a bit later - apparently she had only managed to sail down into Torrent Bay.  Small is beautiful I thought, smugly!

We all went ashore for a walk and then sailed back to anchor on the W side of Astrlolabe Roadstead.

I enjoyed the sail so much so that I ran half way down between Adele and the mainland before turning round and beating back - just for the fun of it.  It was wonderful and even more wonderful to find myself enjoying it all so much.  It makes all the hard work and expense seem worth while now and has enthused me sufficiently to get on with some of the other jobs I need to do to make the boat properly seaworthy.

Posted by Annie Hill at 9:47 am No comments: