The galley fitout goes on and on, but I think I've got most things covered.  Some things I've had to accept I can't have - difficult that one! - and some things have morphed into another shape between sketching the idea and making the reality. And some things are still rather nebulous and could accurately be put under the heading of: 'I'm sure I'll think of a way of doing this'. 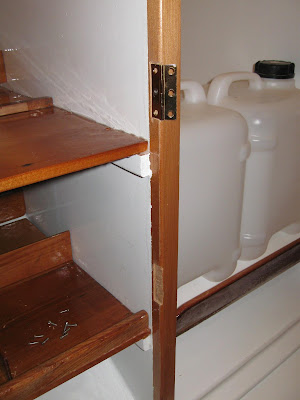 One of the things I have successfully avoided up to now is door hinges, but finally, I've had to face up to them.  They are swine for a not-very-skilled woodworker to fit.  You have to chisel out a rebate for them.  If it's too deep, the doors won't close, it it isn't deep enough, the doors won't fit back in their frames.  I have a book that was supposed to help me fit out this boat and is full of ingenious ideas that generally I haven't been able to use.  One of them is a jig you can make for routing out the hinges. However, the jig looked more work than the hinges and, besides, there wouldn't have been room for it.  Well, there would have been, I suppose, if I'd thought about hinges long before I did anything else. 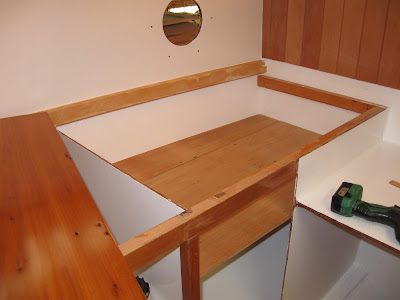 I carried on making and fitting my kauri shelves, all of which needed coating, which slowed down the production run, somewhat. 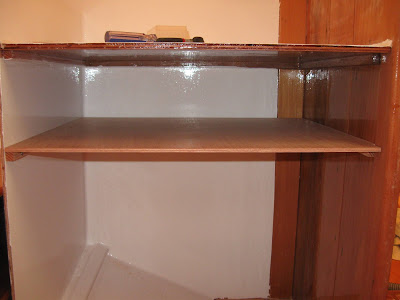 Other shelves are required under the cooker - for pans, for glasses and plates and under them will be the vegetable lockers and a rubbish bin.  The latter exercised me enormously - not only deciding just what to have - and how many - but actually buying something of the right size.  Why didn't I make it? - well, I thought it would be quicker to buy something, but I spent so much time looking, that I should probably have just made it. 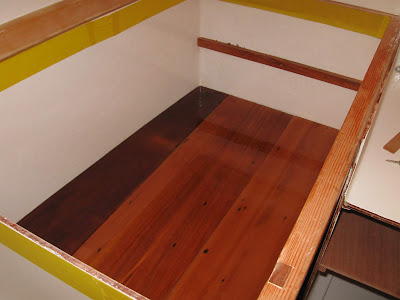 I was just preparing to put in the final shelf when it suddenly occurred to me that once it was in, I wouldn't be able to get in with a screwdriver to fasten the counter under the stringer.  I had actually sanded everything and was ready to mix glue when this hit me.  Thank heavens that it did!  It was something of a shock to realise it was now time to fit the counter, which had been hanging around so long it had become a fixture! 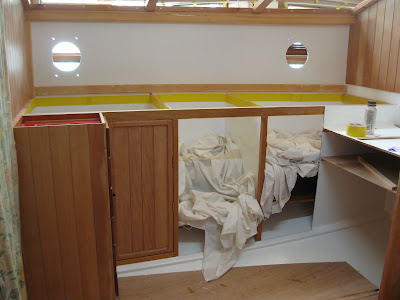 So I masked everything off and placed drop cloths for the inevitable glue drips, did a mental check - was there anything else I had to do first? - and spread glue. 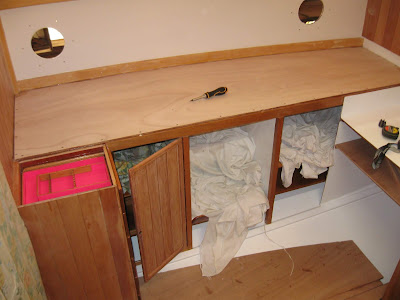 The counter is considerably longer than I am, and needed to be manoeuvred around all sorts of obstacles and then pushed under the stringer without (a) getting epoxy on anything else or (b) scraping the glue off the stringer.  I was dreading the mess, but in fact it was all perfectly straightforward. 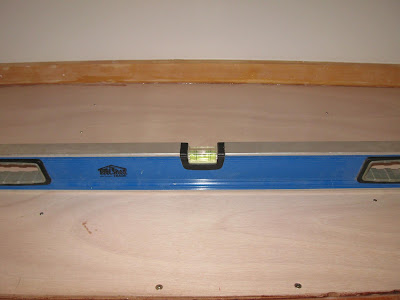 Moreover, it ended up fairly level - level enough for me, anyway! 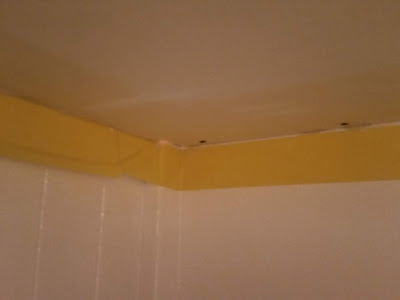 By and large, there are few advantages to being a hobbit, but being able to get through narrow doorways to the far end of a locker is one of them.  I decided to leave the screws in - wielding a screwdriver was one thing, trying to fill the holes, something else entirely.  The clean-up didn't go as well as I'd hoped - I had a visitor and by the time he left, the glue had kicked off from flexible to hard. 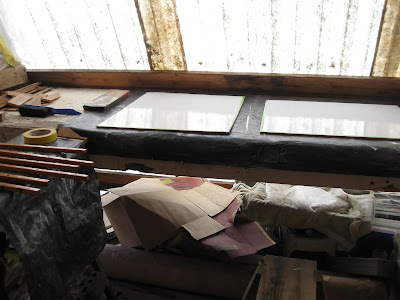 The shelves under the cooker require painting.  I did hesitate over doing this - it means that things have to wait an extra few days - but steeled myself to the delay.  I am going to visit friends in Nelson, next week, and would have liked all the shelves fitted and doors made first, but the time required for painting will probably prevent this. 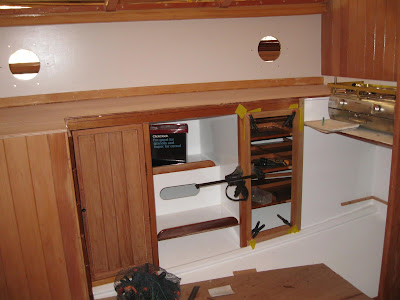 I cut out and fitted the counter over the stack of drawers and the whole thing is ready for its tigerwood, now.  Although before I can do that, I have to make the sink, something else I'm dithering about, not wanting to waste expensive and beautiful wood making a hash of things.  Why don't I just buy a stainless steel sink?  I don't want one. Yes, I know - me and my aesthetics, but there we are. 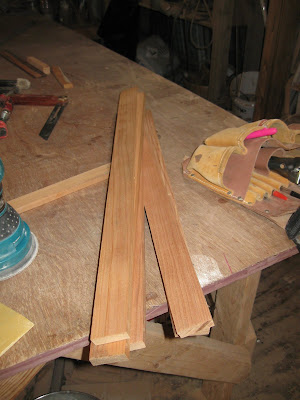 The vegetable locker is going under the shelves, under the cooker.  I am hoping this will be the least warm part of the boat.  I'm making slatted shelves - here are some of the slats sawn from kauri siding. I'm going to have seagrass baskets for the vegetables, which I bought some years ago on Nelson market.  The fact that I'm planning to spend a lot of time in shallow water and/or dried out could mean that vegetables don't keep as well as I'm used to - their locker might get too hot.  I shall just have to see.

Yes, I know I could have a fridge, and am contemplating one, but if I do, it will have to go in the lazarette.  I'm not sure if I can be bothered with the added complexity in my life. I think my decision will largely be dictated by space available under the cockpit.

In many countries, Spring is the cruellest season of the year, and New Zealand is no exception.  It teases and tantalises: warm sunshine and calm weather is followed by days of icy southerlies, which have me scrambling for warm clothes again; my fingers are numb as I handle night-chilled timber.

But last Sunday was one of those special days.  A friend had invited me to visit.  The morning I spent loafing on the verandah soaking up the sun and in the afternoon we drove to the coast and had a wonderful walk up to the top of a headland, where the views along the coast and over islands were sublime.  The green vegetation and the varying blues of the sea and sky reminded me that there is Life Outside the Shed.  We strolled along the beach, conversation rambling over a variety of topics - such fun.  The sun poured on my bare arms and warmed me through and through.  It felt like the first time I'd been thoroughly warm for months.  Such a perfect day.  It really revived me and was a wonderful reminder of why it's worth putting in the hours to get back on the water.

Good friends; beautiful scenery.  And I will get back afloat.  I have so much to look forward to and so much to be grateful for.

A couple of days later, the temperature plummeted, but the weather can't fool me.  Summer isn't far away and like most of those brought up in higher latitudes, I revel in sunshine, even when I'm inside the shed. 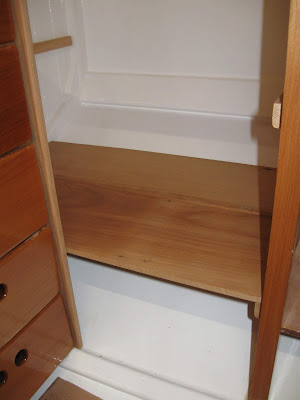 Fitting out the galley is a big job.  There is a lot to think about, although I suspect I'd better make sure I have some spare wood, glue and tools around after I've launched.  There are bound to be things I haven't thought about or that don't work out.  There will be two large, shelved lockers and one will allow large containers, bottles, etc to be stored 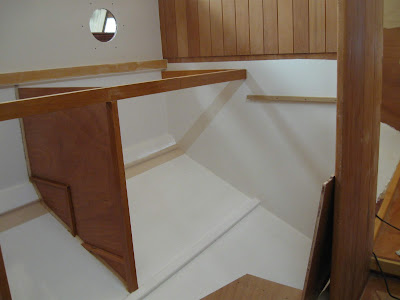 The other will have the shelves closer together. 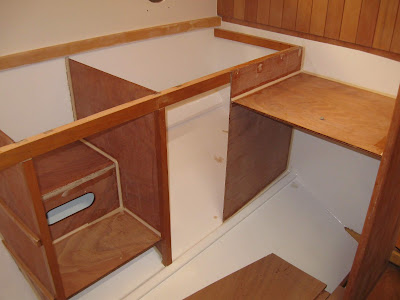 For maximum convenience, there would be a locker along the outboard edge of the counter, but the situation of the portholes precludes this.  One has to make sacrifices for one's art. 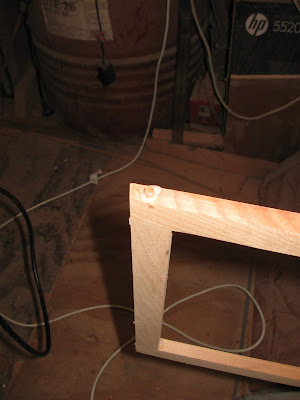 Because I coat everything in epoxy, work in progress has a tendency to hang around for days.  The fluctuating temperatures at this time of the year don't help - if I coat wood before about 3 in the afternoon, it blows bubbles in the epoxy, because it is still warming up after the cold night.  So I tend to have big coating sessions just before I knock off. This photo shows the door being made.  I've found easiest way to make sure they fit is to glue them up in situ and then put a dowel through the joint, which makes it nice and strong. 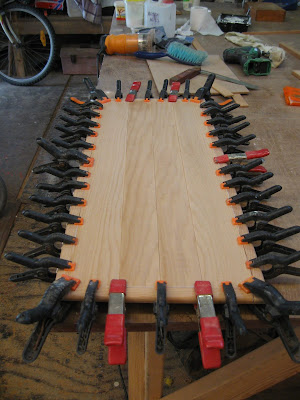 I then did my usual panelling with kauri. I've been using Gorilla foaming polyurethane quite a lot in the joinery: it allows me to glue things up as soon as they're ready.  I've tried PVA.  It works well, but any spillage makes a light stain on the wood that is difficult to remove and shows up badly under the epoxy/varnish. 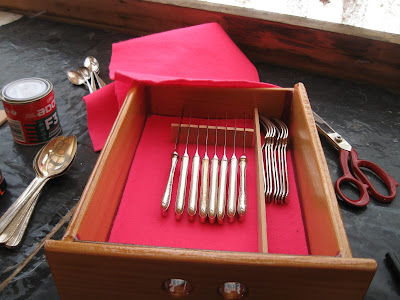 All right.  Don't laugh.  We all know I'm a bourgeoise woman.  But cutlery that crashes and slides about in the drawer is also very annoying at sea or in a rolly anchorage.  And that's my excuse.  Arthur's Emporium couldn't come up with green baize ("Baize?" asked the puzzled shop assistant.  "What's that?"), so I thought I might as well go the whole hog with some nice, girly pink. 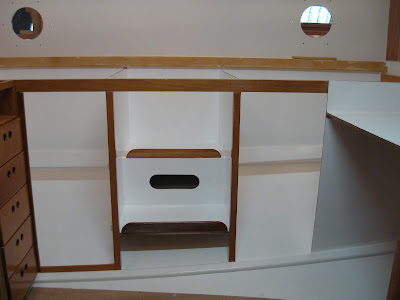 And, of course, everything had to have lots of paint on it. 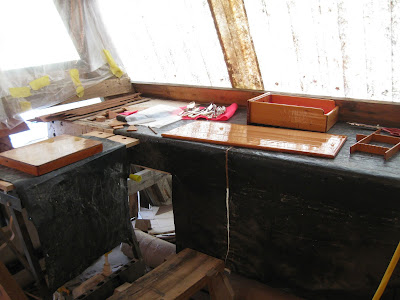 And here we are at the end of the day, with various items of woodwork scattered about having just been coated with epoxy. 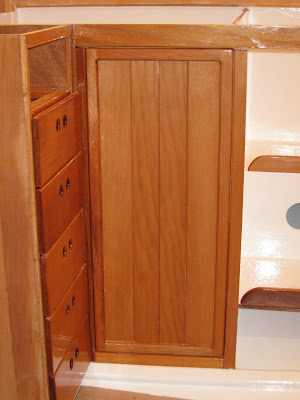 The door in place, still requiring a finger hole.  And, of course, hinges.  I know I'll make a hash of these, so am putting it off as long as possible. 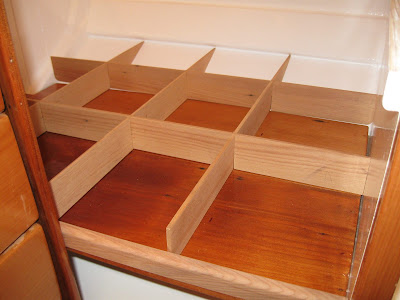 Big lockers allow for lots of stowage, of course.  However, unless things are packed in immovably, they will slide around.  So I'm putting dividers in to control this.  I hope I don't find that all my containers don't quite fit!  I could have dug them out of their various storage boxes and cubby holes but it just seemed too much like hard work.  That's why the good lord invented charity shops, after all.  Those that won't fit can be taken and replaced with some that do!

The area under and around the cooker is still at the planning stage.  Let's hope the plan is clear when I get there!