Some shiny paint and rubbing strakes

Covid 19 rumbles on, but this country appears to have got off lightly insofar as illness and deaths are concerned.  The economy, of course, has taken a hit, but then so it has in countries that have done little to curtail the spread of the virus.  We are pretty much 'unlocked' now and lots of Kiwis are taking the chance to go and explore their own country while there's room to move.  Tourism may bring in a lot of income and we enjoy meeting people from overseas, but you can have too much of a good thing.  Sadly, the leadership which was so admirable during the crisis is completely lacking about the future and instead of taking this opportunity to reset the way we do things, to a low-carbon, environmentally-friendly economy, we are back to Business as Usual.  Really, I despair of humanity.

My life has barely changed at all.  I've had some visitors and got to know some of my neighbours in the boatyard a little better; otherwise I just carry on building my boat.  Somehow I seem to have less and less spare time, which is why writing this blog has been delayed yet again.  We have had some wintry weather: I gave my fan heater to Shirley - it was a waste of time here, the heat just went straight through the plastic roof and sides of the shed - so when I go and visit her I can get warm!  It's also getting dark in the mornings and I have a rooted objection to rising by artificial light.  I manage to get up before 7 most mornings, but was a bit late the other day, when pouring rain delayed the onset of daylight!  It's all more incentive to get the boat finished, and as I'm working with numb toes and sore knuckles, I fantasise about being snug in the saloon, reading Roger Taylor or Hilary Mantel, while the logs crackle in the fire.

In the meantime, I cut wood and mix chemicals. 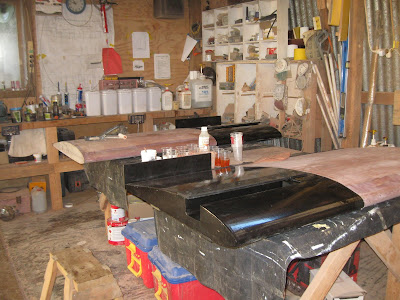 Before painting I wanted to apply the Coppercoat.  I had forgotten how difficult it is to apply the first coat.  It smears, goes on almost transparently and is altogether anything but satisfactory.  Fortunately the instructions call for four coats and I decided to put on five, just in case.  Mixing, however, couldn't be easier and because I am using fairly small quantities, a whole batch can be dumped in the roller tray, which means that the copper doesn't settle out too much. 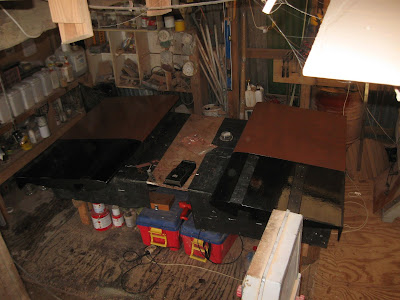 Once coated, they look OK.  I'm sure they would look a lot better it I'd sprayed the finish, but they're fine. 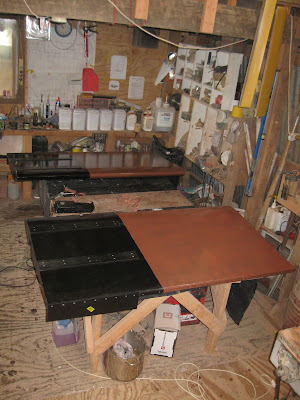 The top of the bilgeboards still looks nice and shiny simply because I've decided that they really don't need painting.  The graphite/epoxy will protect them and it's easy enough to paint the area that shows in a few years when they start to get scratched and dull. 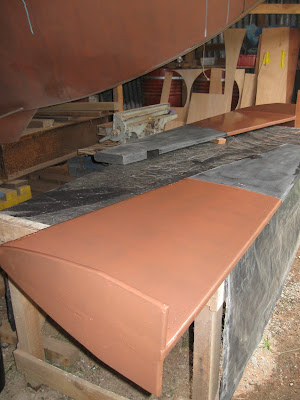 The rudders on the other hand, are to be painted so I sanded them down before applying the Coppercoat.  These, too, finished up quite acceptable.  Because of the way I took the Coppercoat up to the chines, on the hull, it was a bit difficult to decide just where to put the 'waterline'.  It would have looked silly at the same level as the chine - the copper would have gone half way up the transom, so I decided instead that I would have to live with a rather weird visual effect from side on.  The boat is so quirky that I expect I can get away with it,  If not, I shall bring the black paint down to a more conventional waterline one day.  I think I will probably learn to live with it!! 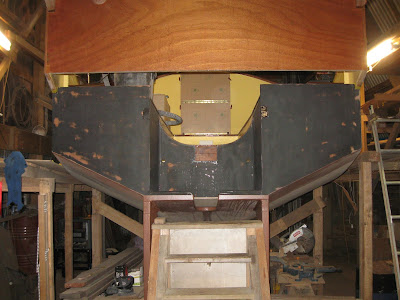 After putting epoxy all over the stern of the boat, I then sanded it all off again.  The joys of boatbuilding.  This was during one of our colder spells and I had to leave the rudders and boards for the moment, while the Coppercoat became hard enough that I dared shift them around. 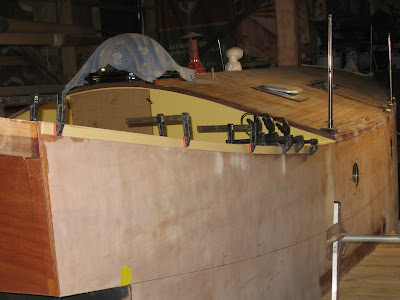 The next job on the list was the rubbing strakes, or 'beltings' as the Kiwis call them, because, according to Noel, they are designed to get belted.  Hmm.  Visually, this is one of the most important things to get right on the boat.  Everyone will tell you how to do this: mark them out and then step back and check for a fair curve with no bumps and hollows.  No-one tells you how you can do this in a shed where you can't get farther than a metre or so away from the side of the boat.  Add to this the fact that I don't have the sort of 'eye' that can see these things very well and it has to be said that fitting of them is something of a gamble.  If it's wrong, it's wrong and in truth, there will be nothing I can do about it.  It will turn a pretty (to me) boat into a home-built atrocity, but that's life. 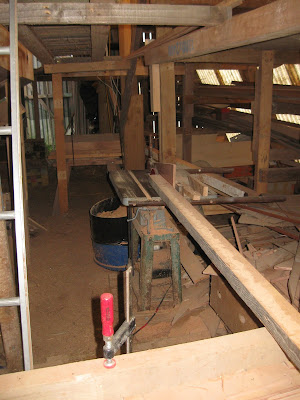 I'd put a lot of thought into what size the rubbing strakes should be.  Too small and they are a waste of time; too large and they will look clumsy.  Fortunately, having made my decision, I discovered that it was the correct one: I didn't have enough timber left for more!  I decided against using the saligna: it's certainly hard, but it's a brute to work and as I didn't want to screw from the inside, which would mean lots of filling and painting, I could only use relatively small screws from the outside, which would necessitate very thin laminates to start with.  I had two lengths of yellow cedar left and milled up a load of douglas fir left over from the tabernacle.  I plan to finish off with teak left over from the decking.  It's not that hard, but it's easy to work and of appropriate thickness.  And it's a lot lighter than saligna.  The photo shows me cutting the large baulk of douglas fir down to a smaller section, before cutting it again in the other dimension. 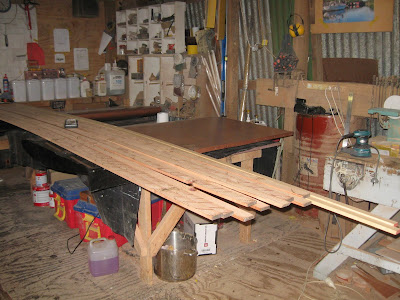 And these are the laminates, thus formed.  There are a few knots, but these can be staggered.  The 'beltings' are not structural, after all, and glued throughout their length.  The softwood was very accommodating when I came to fit it. 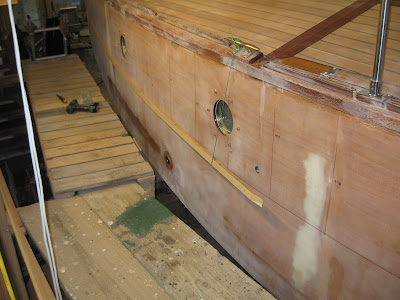 The biggest problem was supporting 4m lengths of wood while holding them at one end.  A bit of string tied to handy deck cleats or stanchion bases helped with this.  I fitted the first layer and screwed it into place.  I then left it for a few days to get the idea and, sure enough, when I came back, it had taken up the curve.  This made the actual gluing in place a lot more straightforward. 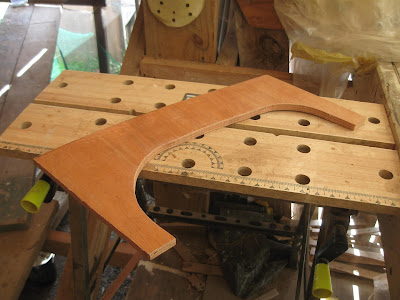 My original plan had been to run the wood out into a taper at a distance from the bow and stern, as is generally done with Western-style boats.  However, it just didn't look right, so I looked at some illustrations of junks and decided to do as they do, and have a filler piece joining the two sets of strakes.  (Just as they scatter masts with gay abandon and no sense of symmetry, so too do the Chinese add fore and aft timbers which no doubt have a purpose, but which is not always obvious to the Western eye.) 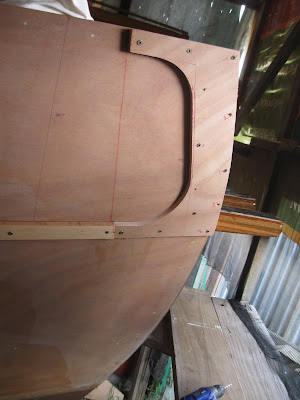 The forward end had a slightly different shape.  As I mentioned, it's rather hard to stand back and get a proper look.  The photo above was taken by the camera held in my hand as far away as I could from the bow.  I can't get that view! 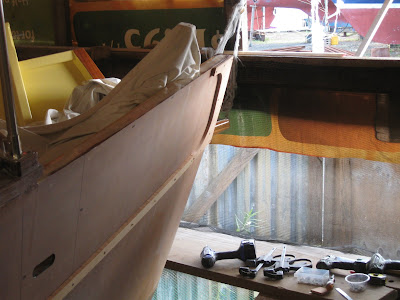 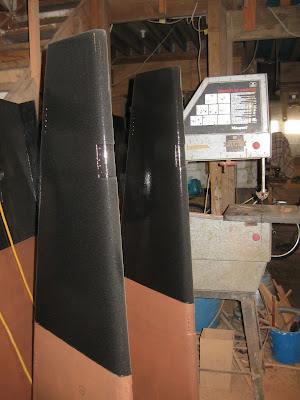 Meanwhile, the Coppercoat had hardened sufficiently to be able to move the rudders and - finally - get the bilgeboards off the big table, so that I could use it again.  Shirley came and gave me a hand with them. 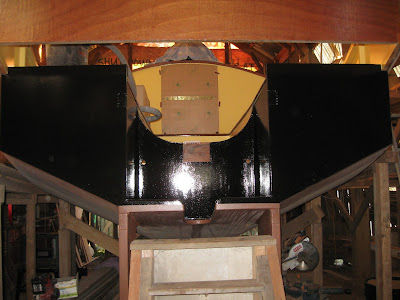 So I mixed up paint and applied it to the stern, the rudders and the trim tabs.  Because of having to do other jobs and making dust, I could only paint at the end of the day, by which time it was dark.  In spite of the myth of my perfectionism, I am fully of the opinion that life is too short for sanding and fairing a hull.  And too short for going back and reapplying yet another coat of paint if the job isn't up to standard.  A "ten-foot job" is more than good enough and the boat will look fine in the water.  I am not being falsely modest here - the flash from the camera is pretty flattering! 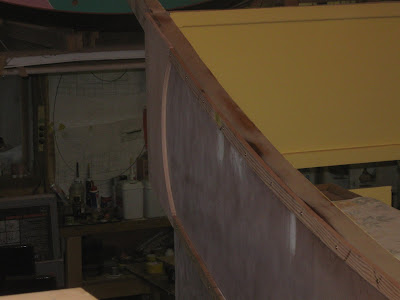 I could now start attaching the rubbing strakes, while trying not to touch the new paint, which took several days to harden off. 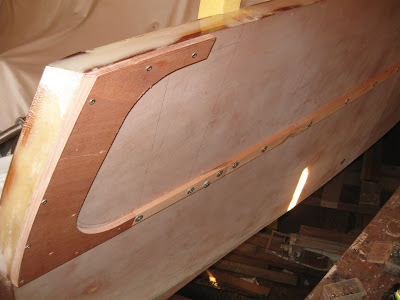 Again, this is the best photo I can manage without hiring a drone.  I used washers just to be absolutely sure the points of the screws didn't penetrate the interior. 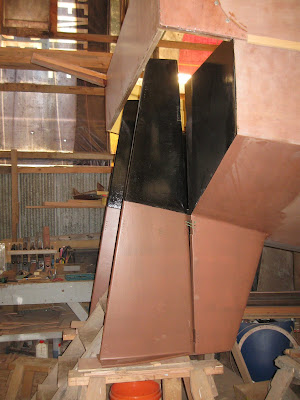 With the paint finally hard enough to allow us to handle the rudders, Shirley and I got them into place on a couple of saw horses.  It was a bit of a business getting them around the lute.  The price we pay for vanity!  I put temporary lashings to keep them in place. 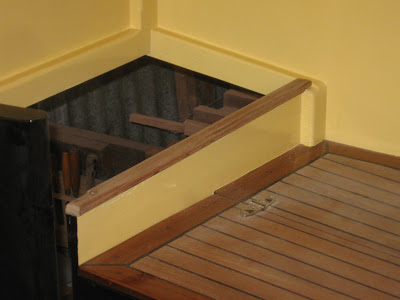 Before I could fix them permanently, I had to put a capping on the stern.  This had to be carved out so that the rudder doesn't chafe against it and it was easiest to ensure it fitted when the rudder was actually there. 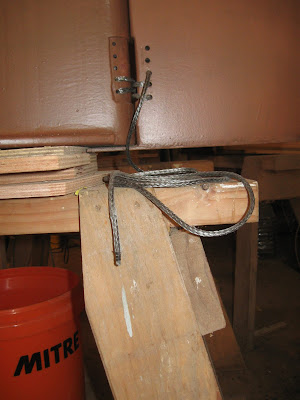 I decided to go with Dyneema for the lashings, because I was concerned that with braid on braid the core might move in relation to the sheath.  Marlow used to make a wonderful single braid polyester, but I couldn't find it on their website and, anyway, I would have to order it, while I could just pop into All Marine for the Dyneema.  Hanneke and James appear to recommend braid on braid, so I might be making a fuss about nothing, especially as the Dyneema may need replacing in about ten years, due to UV damage. 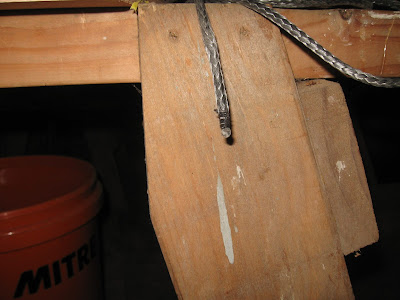 It wasn't the easiest of ropes to work with because unlike polyester, it doesn't melt, so you can't make a nice pointed end with it.  The first length, with a whipping from sewing thread was fine, but after that I had more than a few problems and finally tapered the end and wrapped it with sellotape. 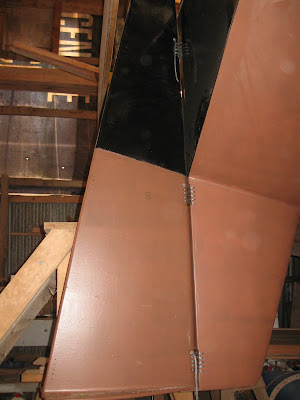 I pulled it all as tightly as I could, but it's hard to stop it creeping back again once you've tied the final knot. 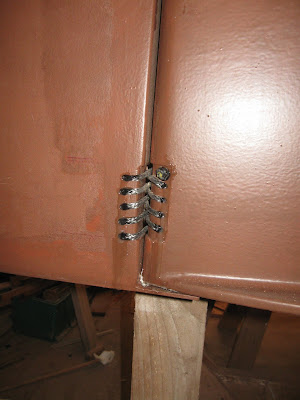 I wish I had some Coppercoat left to paint it with.  The final stage is to fill the holes with epoxy.  I spent a lot of time doing this messy job.  I assume the point of this is to stop the rope creeping and/or rotating and chafing.  Anyway, as I'm a neurotic about water getting into the wood, I did a very thorough job.  It didn't end up looking anywhere near as neat as in Wharram's photos!  The Dyneema seemed to wick the epoxy, which is great. 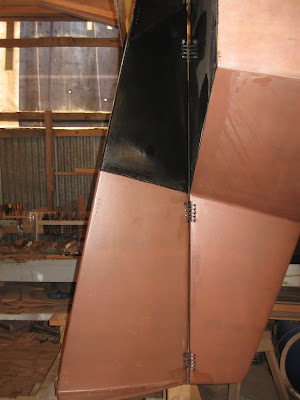 After it had all hardened off, I removed the supports from under the rudders and to my unbounded relief, they didn't suddenly sag down.  I'd read of a Wharram builder saying this happened to his and wonder if it was my generosity with the epoxy that stopped this from happening.  I am delighted with the finished result.  No friction, no rattling, the rudders close to the stern and all for under $50.  As the saying goes, 'what's not to like?' 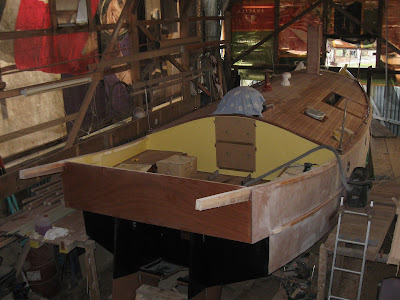 It's a long time since I've taken a shot from the top of the stairs.  The idea was to show the rubbing strakes, but to be honest, it's not a great success in that respect.  However, it does show the fact that The End Is In Sight!!
Posted by Annie Hill at 9:27 am 1 comment: