There's been a whole lot of painting going on, so in many ways not a lot to show for the couple of weeks since last I blogged. 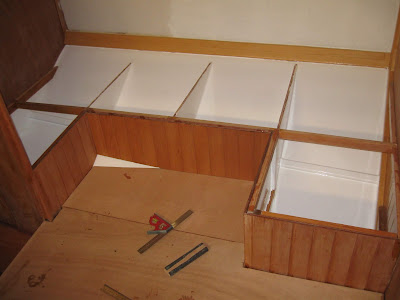 The little bulkheads that support the settee base are now painted and you can see that what will be the lift-up bunk extension, is fitted between the two athwartships seats.  It's just sitting there at the moment while I try and source 'flat' bolts to fasten it in place. 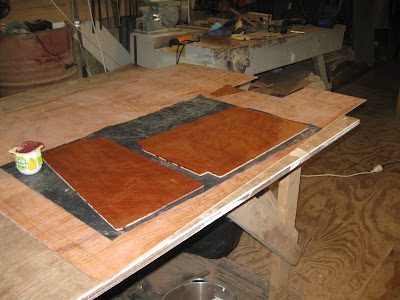 These two bulkheads are simply to divide the lockers into smaller spaces, to make them more manageable.  I did debate not painting them, but keep reminding myself that lockers with light interiors are easier to find things in. 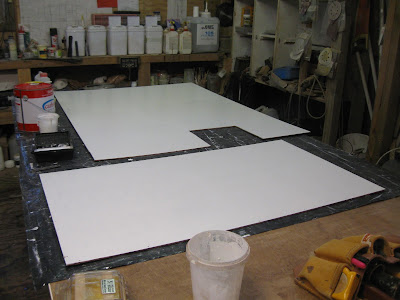 And there were four coats of paint to apply to the deckhead, before it could be fitted. 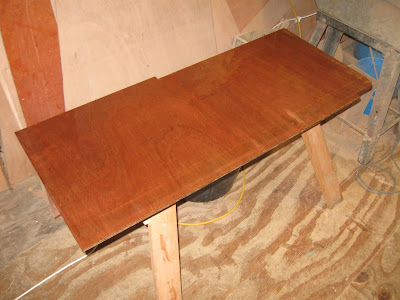 I had originally intended to make the top of the dinette area out of one piece of ply, but manhandling the larger of the sheets of ply for the deckhead put paid to that notion.  I guess it's a more efficient use of ply, anyway, to make it in three pieces.  More coating. 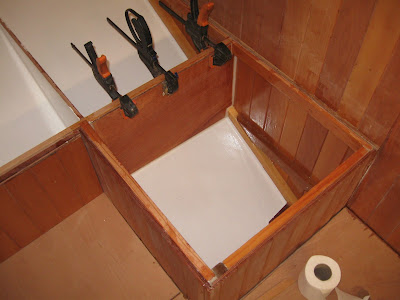 Filletting in the partition bulkheads.  It's easier to paint them in situ because I can do both sides at once. 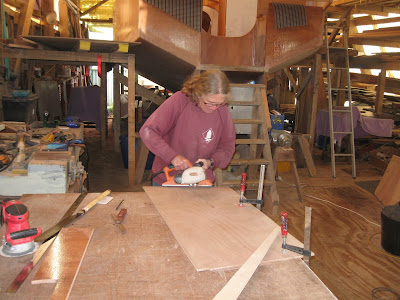 The seat tops have to be chamfered along their outboard edge to (more or less) match the angle of the hull.  I'm a bit more confident with the power plane than I was two years ago. 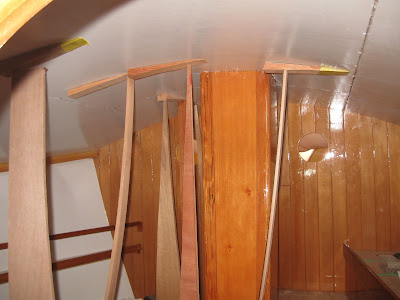 Finally I was ready to fit the deckhead liner.  This is part of the deck structure, so has to be glued into place with epoxy.  Because I don't want it full of screw holes, it was a bit of a mission to get it snug to the deck beams, which have a strong camber.  It's just as well the temperatures have fallen by 10⁰ or so, or the glue would have kicked off long before I finished the job. 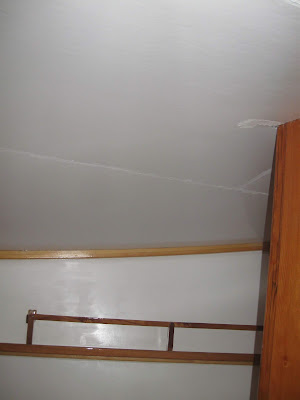 The deckhead installed.  Although I had fitted it several times previously, I managed to produce a wee crack in it next to the tabernacle.  I've filled this and will touch it up with paint next time I have some mixed.  No doubt it will irritate the soul out of me for the next x number of years while I lie in my bunk. 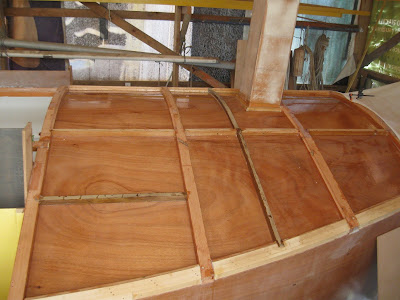 And here is a shot from the outside showing the deckhead fitted.  The forecabin is now closed in - or would be if only I'd finish cleaning up those portholes! 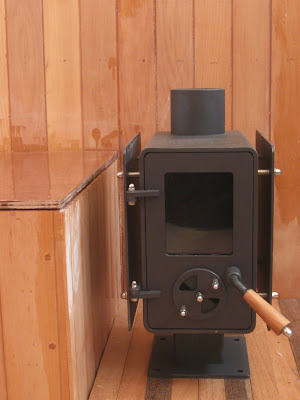 Some time ago I posted about the lovely little stove I'd bought from the UK.  However, it had no window and this was a sad thought.  Some time ago, my friends, Phil and Mark again showed me their stove on Icebreaker and it was a lot smaller than I remembered and has a wonderful window.  I looked for ages to find the builder's details, without success: he doesn't normally bother to advertise.  However, fortunately, P&M still had his phone number, so I called and ordered one.  Somewhat to my consternation, he made one there and then, which did nothing for my budget.  I really can't afford it, but on the other hand, I'll get so much pleasure, sitting in my saloon on a cold winter's night (and don't believe what they tell you about the 'Winterless North'), watching the flames flicker in my little Flick stove.

Posted by Annie Hill at 2:37 pm No comments:

In the saloon, with a slight diversion towards rudders

As I concluded in my last blog, I was ready to put in the fronts and sides for the dinette area. 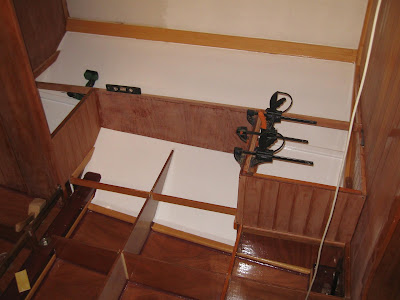 It was a bit of a jigsaw puzzle, putting them all together, because they had framework or overlaps that meant they could only be fitted in a certain order.  However, I 'proceeded in an orderly fashion' and got them into place satisfactorily. 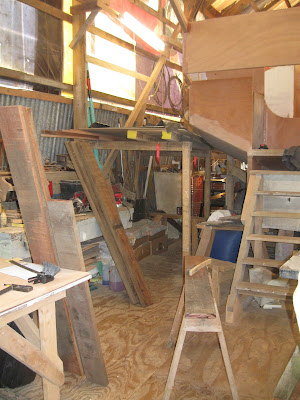 Pete, having found a new-to-him boat, and having packed up or disposed of all that he had on Oryx, had a bit of time on his hands and offered to give me some help making the rudders.  We sorted through some of the saligna in the wood store and found what was needed.  Pete measured and sawed it to length and then spent a long time planing it all.  Saligna is hard and we went through three sets of blades doing it.  The blades have two sides and I had just put in a brand-new pair, which we turned when about a quarter of the way through the job.  When they were blunt, I replaced them with another pair that I'd had sharpened, and these did the remaining half of the wood and were still sharp at the end of it.  There's a moral there, but I'm not sure what it is! 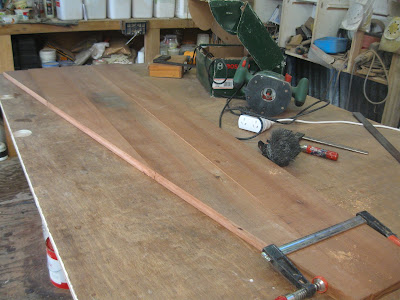 The rudders are built from three layers, with the middle layer of 23mm running up and down, and the outer layers of 12mm, running parallel with the trailing edge.  The centre portion of the rudder was edge glued 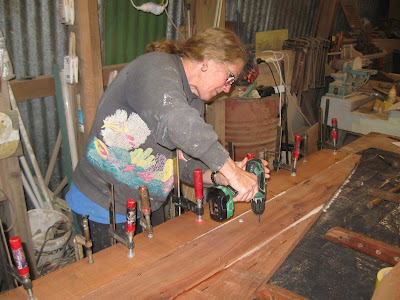 And then we glued and screwed the outside layers.  You have to be very careful not only preparing the pilot holes for the screws, but both sending them in and backing them out.  The electric screwdriver has to be set on about 5, and the screws finished by hand, otherwise they may sheer.  The same applies to backing them out - if they are held too hard by the wood, the electric screwdriver will sheer them off. 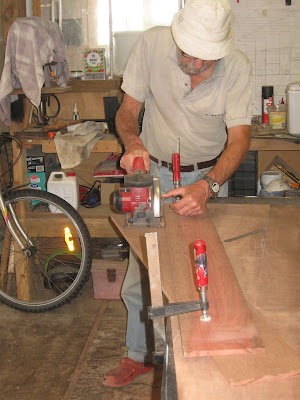 My 18v battery circular saw was powerful enough to saw up the thinner pieces of wood - but needed recharging at regular intervals. 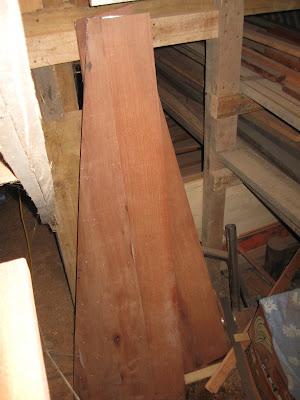 Once the rudders were glued up, I sanded off the excess glue and moved them out of the way to wait until their time comes for shaping.  Pete packed his bags and flew to USA, but his help was much appreciated.  And yes, Oryx is still for sale! 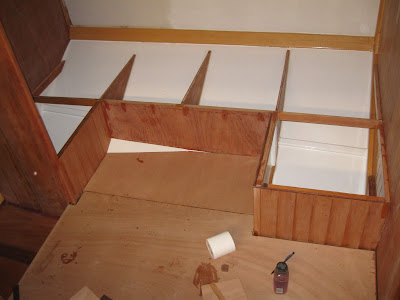 So, back into the saloon.  Here I'm installing little athwartships bulkheads, which serve the dual purpose of supporting the seats and breaking up the lockers into sensible sizes.  The next stage is to paint them white. 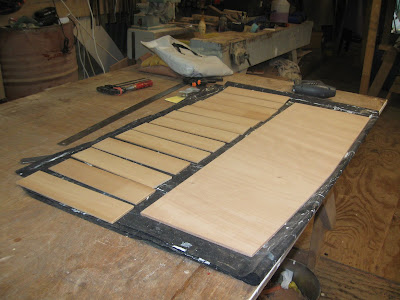 The end of the U is to be a lift up flap to make the settee wider and thus a more comfortable spare bunk.  Many people do this by making a table that goes up and down to fill the space, but I'm not really fond of these and it would make it difficult to get access to the after seat, by the little bulkhead. 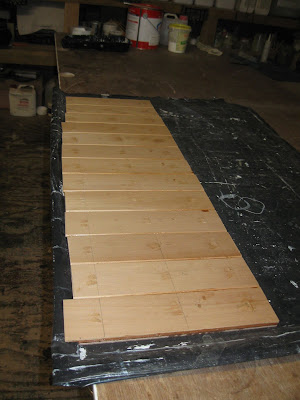 The extension will be hinged up: here it has had the kauri glued down to it.  When the glue is cured it will be sanded and coated.