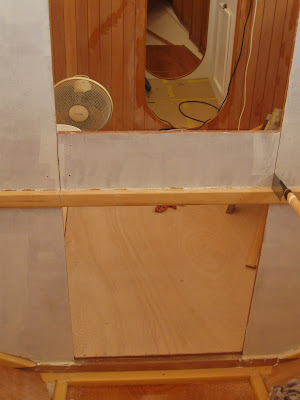 Somehow or other, this had been incorrectly marked, making it too high.  I hadn't wanted to cut it out until the deckbeam was in place, because the two parts of the bulkhead would have been a bit insecure (although no doubt more than strong enough).  Moreover, fitting the deckbeam allowed for a physical check that the cross-piece was in the wrong place.  The initial idea was that I could just sit under the deck in the companionway: when the deck beam was fitted, I found I couldn't.  So, I braced myself and took to it with a saw. 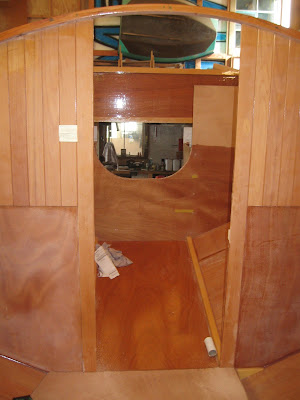 More than a few people had suggested I do this ages ago, to make access in and out of the boat easier, but I had resisted this sensible suggestion.  I suppose it is easier, but having got so used to ducking underneath, I don't really notice it, to tell the truth. 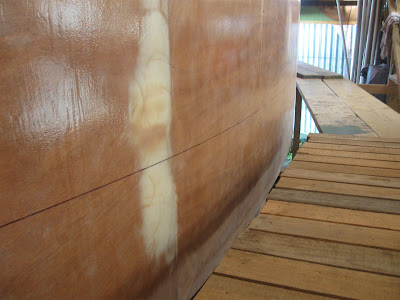 Early in the new year, Marcus helped me mark out the line which will be the bottom of the lower rubbing strake.  This was so that I could work out where the portholes are to go.  This is always a tricky decision: one wants them to by symmetrical from the outside, but on the other hand, they also have to look right inside and not end up behind joinery! 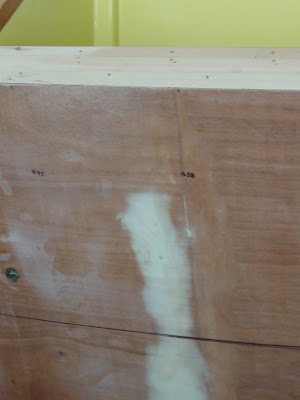 Anyway, I marked at regular intervals along the sheer clamp and then measured down.  I marked the same on the other side, noted the measurements I'd made and 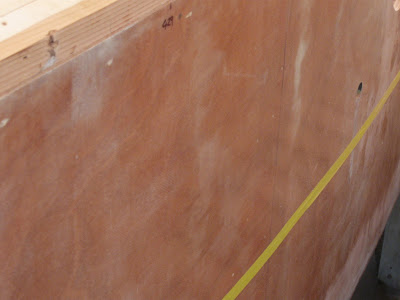 transferred them to the port side.  I then ran a length of masking tape to make a continuous line.  I then measured the midpoint between the two, so that the portholes would be centred horizontally, and then measured along to get them even vertically. 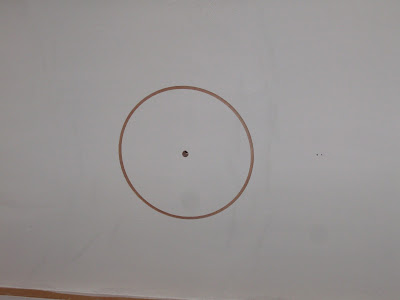 These measurements were transferred to the inside and the two were verified by the simple expedient of drilling a hole through where the centre of the porthole would be from both outside and inside.  A 0.5mm drill was used.  There was no significant discrepancy, so I took a punch and marked all the centres a little more deeply, so that the large drill from the hole saw mandrel would locate positively.  I then marked all the portholes with the hole saw from the inside to check both with tape and by eye that they all looked OK. 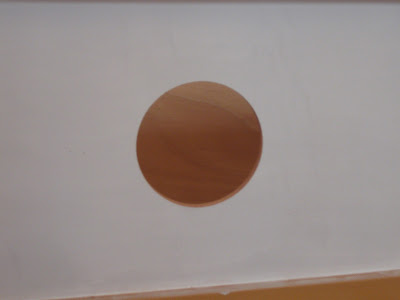 Then I took a deep breath and cut the first hole.  It was a long tedious process.  I used my battery drill, because it is lighter and slower than the hand drill.  It got pretty hot and the batteries didn't last too long, but as my wrist soon tired of holding the saw in place, this didn't prove to be a problem.  A lot of people warned me that I might well have issues using such a big hole saw, but thus far it hasn't been a problem.  Possibly because the plywood is relatively thin. 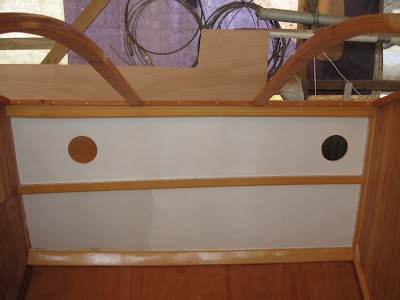 I drilled six holes in total (having already made the ones at the front of the cabin) before concluding that the hole saw had done its dash and needed re-sharpening.  So now I'm waiting for it to be ready. 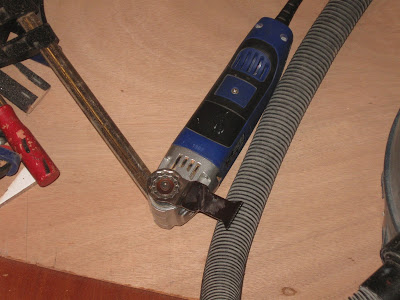 In the meantime, it was back to working on the deck framework.  I am fitting two stringers between the bulkhead forward of the bilgeboard and the after bulkhead.  These are going just where the flat part of the deck joins the curve, so I can use fairly big pieces of wood that won't require shaping.  I decided to notch them over the deck beams and found that a 'multitool' in combination with a router was a good way to mark the rebates. 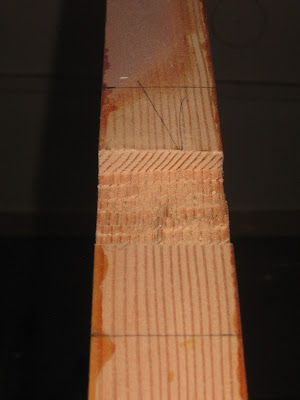 With the multitool I cut slots across the rebate, as you would with a normal saw, and then chiselled the remaining wood out.  This left a rather rough notch that was a few mm shy of the required depth. 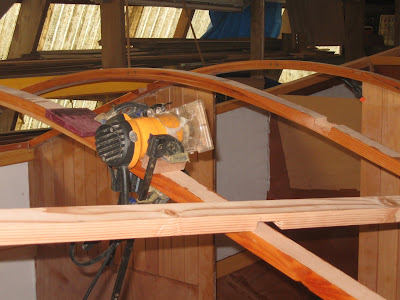 I then took the router and cleaned out the rebates to the correct depth.  You can see one of the stringers in this photo, being dry fitted. 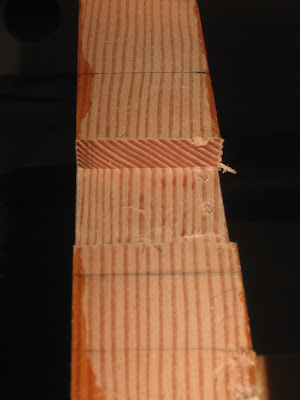 The slot cleaned out nicely, ready for accepting the glued stringer.

The next job is to get back to the tabernacle and mast step, so that this can be fitted together with its deck beams.