I'm working on finishing the decks before moving on to bilgeboards and so on. Laying teak in the cockpit was the final job before I could sign if off as finished. 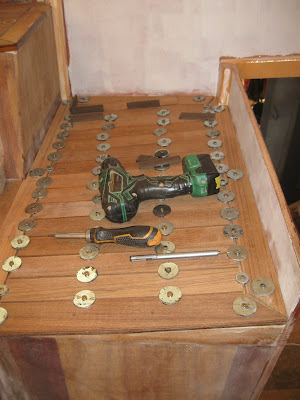 At the moment, I climb on and off the boat (dozens of times a day) over the stern and so the after end of the deck lockers in 'in my face' time and again.  I have covered them with teak, but wonder how often I'll see it again, because I shall have a boarding ladder for climbing on and off.  (Negotiating two rudders and the outboard motor would not be easy even if I liked getting aboard by way of the stern.  Which I don't.)

The petrol locker lids also get teak, of course. 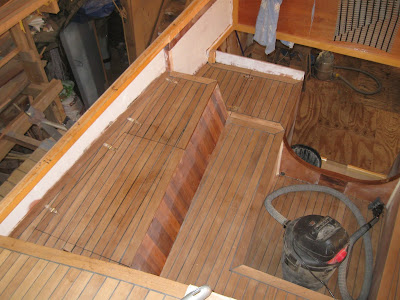 With all the teak laid and sanded I have to say that I think it looks rather grand. 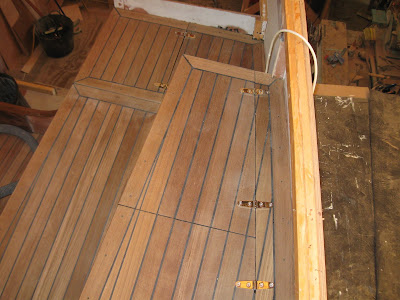 The hinges were a shocking price in NZ, so I had to resort to Ebay.  I am very pleased with the quality of them, but they took the best part of a couple of months to get here!

Although they look like brass for some reason, in the photo, they are in fact stainless steel.  Purportedly 316. 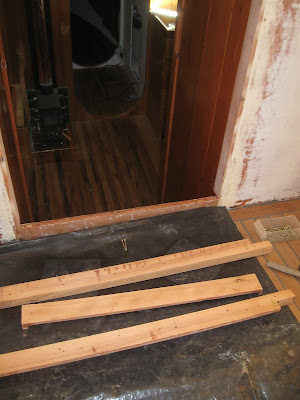 It was about time to tackle the companionway, which was much more straightforward that I anticipated, with memories of the rather marathon effort that was required when I rebuilt Fantail's "washboards".  All that was really required was some additional framing for the acrylic to land on. 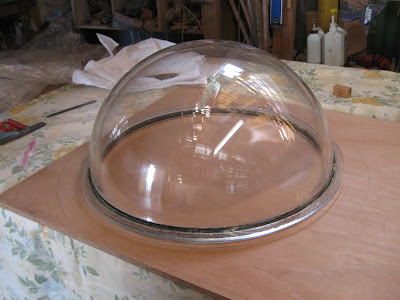 The plan is to have a Jester style pramhood and a bubble over it, like we had on Badger.  The bubble means that when the hatch is shut in cold weather, there will still be plenty of light coming in.  It also allows my taller visitors to stand up while working out how to negotiate their way to a seat! 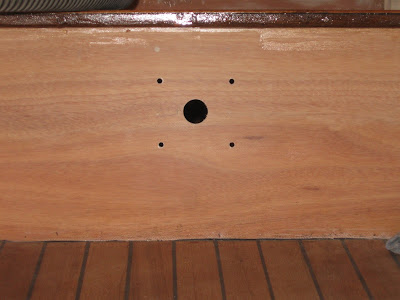 The other thing that required fitting is my echo sounder - I should hate to sail without one, although plenty of other people seem happy to do so.  This took a ridiculous amount of time to fit, because I had to run wires from the electric panel under the cabin sole, all the way back to the lazarette. 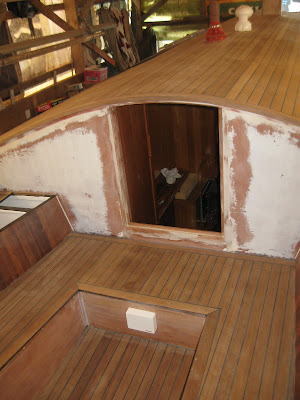 As ever, I was more than a little startled when I flicked the switch to see that it is apparently working.  I'm in 2.3 m of water, so it would have me believe!  I'm not quite sure why it's reading this ... 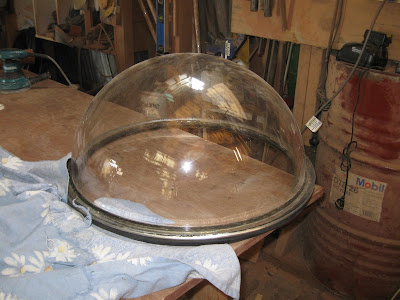 In winter, standing under a Perspex dome can be as effective as standing in a shower.  I had a second one made out of much lighter material (the outer one is 10mm, the inner one 3mm) and stuck them together with what I hope is an appropriate air gap.  Both domes, made to measure, only cost $300, which I reckon to be one of my better bargains. 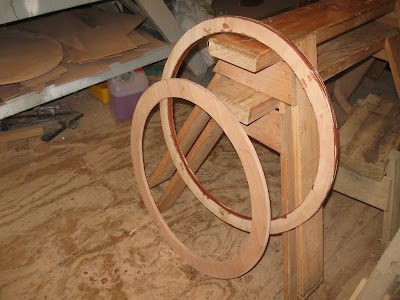 Actually fitting it to the deck is going to be quite a problem because of the camber.  Indeed, it has caused me some loss of sleep, but this morning it occurred to me that the obvious thing is to make a flat area on deck and put the rings on that.  (I had been intending to build the rings up and shape them to the deck, but to be honest, that is definitely beyond my skills. 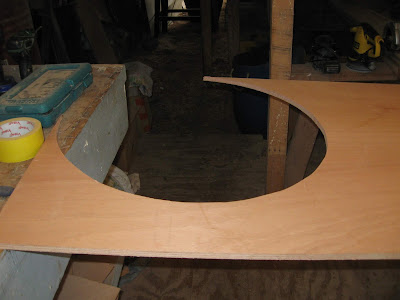 This is the piece of plywood from which the upper ring was cut.  It seemed like an awful waste of wood!  If you can't visualise how the pramhood works, All Will Be Revealed ... in due course. 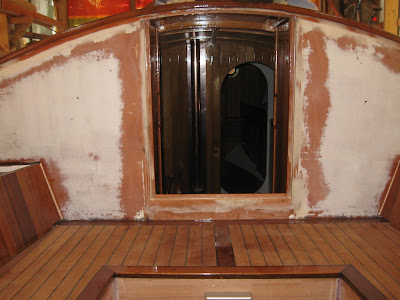 The framing is now fitted around the companionway and varnishing is underway. 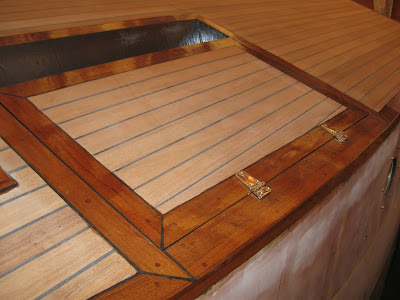 Well, I might as well say it, because I think more than a few people think that my delight in varnish is a little suspect, but I like varnishing.  In fact the reluctance of the average person to put varnish on to their boat is a constant source of puzzlement to me.  In the days when people owned traditionally-built, carvel boats, they usually had quite a lot of brightwork, which had to be maintained every year, together with the work required to keep the topsides in good order.  And in those days varnish only lasted a season before requiring quite a bit of work to bring it up to scratch. 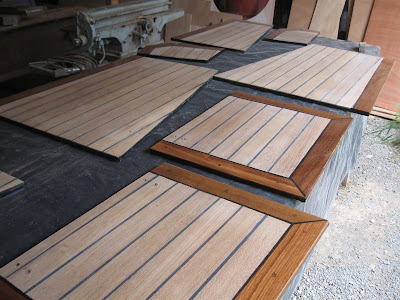 Now people generally have plastic hulls which require little or no maintenance and very little woodwork on deck, but even the little that they have is apparently too much 'work'.  How is it work, I ask myself, to beautify your pride and joy?  A mystery.  Anyway, it's been downright pleasurable to finish laying the teak and to be able to pick out the bits that I want to have a bright finish.  It would also appear that even people who don't like varnishing themselves often like the look of it, so it's nice to know that it will give other people pleasure, too. 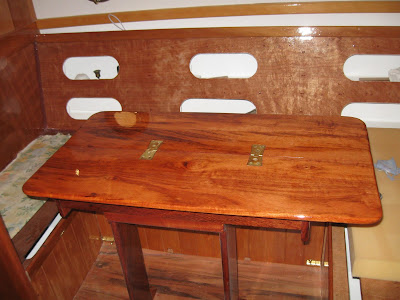 And while I had some mixed up, I finally got to varnish the saloon table, which seems to work well.  Sadly, one piece of the tigerwood has developed a bit of a twist, so the table is far from perfect.  I had hoped that the table would be the stand-out feature in the saloon.  Never mind, it still looks attractive.  It slides fore and aft to allow people to get in at either end and now that it's summer, it slides almost too well.  I shall have to put something on it to hold the top in the right place!