And I still have to put up the decorations, wrap presents and make a card.  So this week I'll keep it simple. 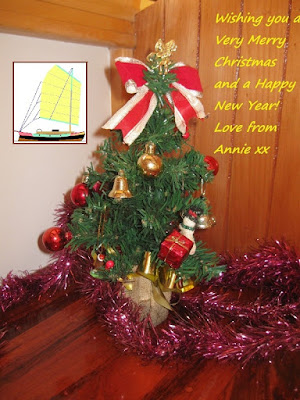 Posted by Annie Hill at 1:31 pm No comments:

With Christmas just around the corner

It's summer here, and everyone is feeling sociable, so I have had lots of visitors.  No problems - I like visitors, but feel guilty when they leave because I've been chatting instead of working.  Ah well plan like you'll live forever, but live like you'll die tomorrow is my motto!  Bertrand, of the SibLim Club, is presently anchored in the river, and members Mark and Phil are back from Oz.  Pete and Linda returned from their Pacific tour recently and plans are afoot from those lucky junkies with boats, as to when to assemble in the Bay of Islands for the Tall Ships. 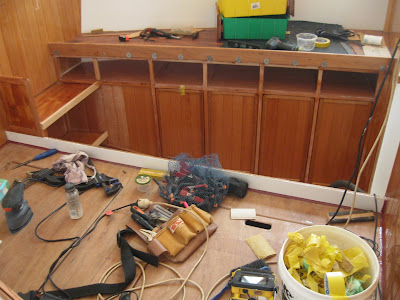 In the meantime, I've been plodding on in the forecabin. I removed the fiddle along the counter top and glued it back into place.  In spite of aligning it carefully, using a hand screwdriver very gingerly and - I thought - making sure that I found all the screw holes, I managed to get it in the wrong place, so it had to come off again and I had to scrape all the epoxy off before it kicked off.  (As it is now around 30C in the shed from about 1100 onwards, this had to be done in a hurry.)  The second time I rested it in position on clamps and that went so easily that I wondered why I hadn't thought of it before. I also fitted fiddles to the athwartships bookshelves. 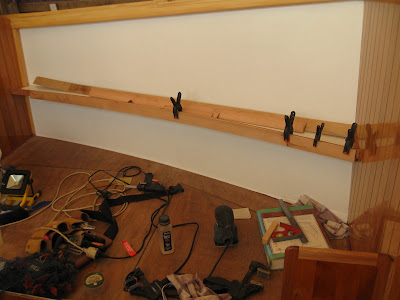 I then had to laminate up the fiddle for the bookshelf over the bunk.  The obvious thing was to use the existing one as a pattern, which was made easier due to the fact that I didn't want the new one to be as long.  I made it of two layers and it sprang back, so I then had to add a couple more to it.  These were thinner - I didn't want the fiddle to be too heavy - and they did a good job of locking the curve in. 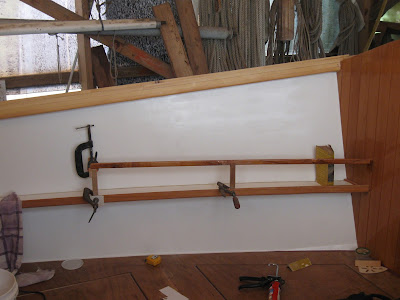 That done, I had to fit supports for it.  The shelf is of the right size for books like those the Mariners' Library (Rupert Hard-Davis), used to print.  Once the libraries had every book on their shelves, but now you rarely see them.  I keep hoping someone will bring them out as e-books - perfect for sailors with not too much space for books! 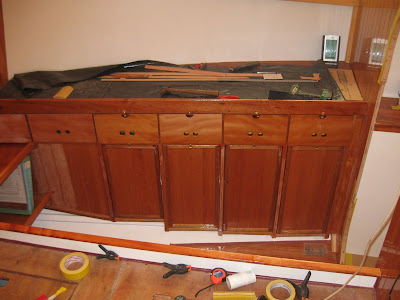 Then I fitted the little brass turnbuttons to stop drawers and doors falling out.  These could be considered an extravagance, but they do look nice and work very well.  Here's the locker with the turnbuttons in place.  I added little hemispheres of tigerwood to the drawers, which don't stick out as far as the fiddle.  This will also prevent the relatively soft kauri from getting marked from a heavy drawer leaning against the turnbutton and stop them sliding back and forth in irritating fashion as we roll down the Trade Winds.  (Yeah Right!) 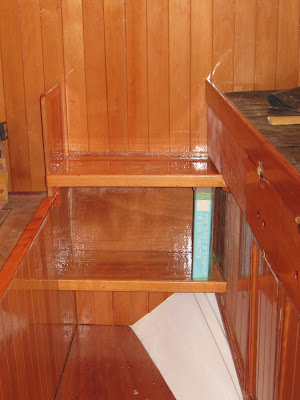 The big bookshelves were coated and you can see that there is room for Junks and Sampans.  I trust that there will be sufficient books to hide the bare plywood. I really didn't want to panel the section between the two shelves.  I can't wait to see them filled! 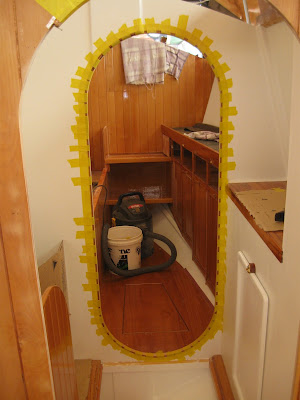 The next job, which I think is the last one required to complete the fitting out of the forecabin, was to veneer the end grain of the plywood with a kauri 'clashing' (as it is apparently called here).  The first layers were a bit of a disaster, because although the wood was only about 2mm thick, it really didn't want to bend.  It caused a lot of frustration and bad language. 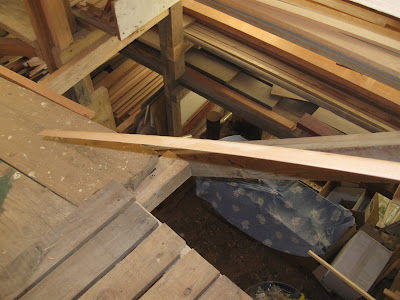 Sawing some thin stuff off another piece of kauri that Marcus discovered in the wood pile and gave to me, sorted the issue.  For some reason, this wood was a lot more flexible.  And, it was long enough to go round in one length. 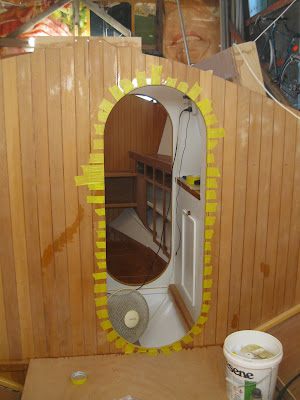 While I was at it, I started on the saloon doorway, too.  By now I have the knack.  The first long length I put in, I - foolishly - precoated, with the result that epoxy got spread around all over the place.  The second one, I carefully coiled up, holding it together with masking tape.  By the time I got to the third one I had worked out to secure the end with masking tape and then to carefully unwind the strip of veneer, make loose loops of masking tape at each 'corner', so that it couldn't escape, but on the other hand could slide easily as it got taped into place.  There are still a few gaps, but hey - this is the 'country cottage look'!  It uses miles of masking tape!  I plane each one down with a teensy-weensy plane before putting on the next layer - just putting generous amounts of epoxy on the wood already in place.  (I can hear teeth being sucked, but it's not exactly structural.) 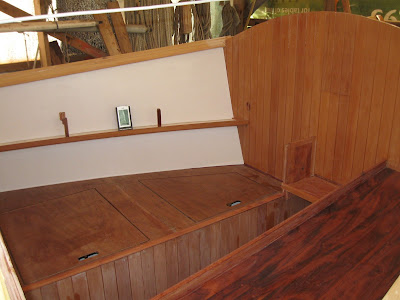 And while the glue has been kicking off, I've been doing The Big Sand.  Not a nice job: hot and noisy with sander and vacuum going full blast.  It's going to be 'fun' varnishing it all in these temperatures.  I have found that the only solution is to add lots of polyurethane thinners.  The manufacturers' chemists would probably weep at this comment, but from past experience, the coating doesn't seem adversely affected, although I suppose it must be.  I guess it's just so good anyway, that at even 70% efficiency, it's quite wonderful!

So once I've posted this - and sent out a few Christmas e-cards - I'd better get on with it.
Posted by Annie Hill at 12:58 pm 4 comments:

I can understand why people skimp on coating with epoxy

I am not really the soul of patience and am in accord with Tilman that it is a virtue easily exhausted by exercise.  I am more than ready to move on to another stage in the boat and this final locker in the forecabin is really proving rather testing: I keep getting held up because there is sticky wood around which can't be handled or touched.

Of course there are approximately 10,732 other jobs I could do while the epoxy goes hard, but I can only hold so much in my brain and I fear that if I move on to another job, I shall make a mess of what I'm doing here, by forgetting some crucial part.  I keep forgetting things anyway, like (as Marcus pointed out), what do I intend to do to keep the books in the port bookshelf?  (Bother.)  And how long am I going to put off trimming the door frame?  (Go away.)  I also spent an inordinate amount of time trying to use the remaining offcuts from to make an end to a couple of big bookshelves I've been making.  Not possible so I made a nice panelled bulkhead which will probably look better anyway.  The 'big bookshelves' is a misnomer: it's more accurately the bookshelves for big books, dominated by my need to find an easily accessible home for my greatest treasure: The Junks and Sampans of the Yangtze, given to me by my friend Gary Underwood, prolific designer of houses and boats.  He has been slowly offloading some of his fantastic library and I was the lucky person he thought of for this book.  I have managed to get most of G.R.G. Worcester's books, which are delightfully written and beautifully illustrated.  I look forward to the time when I can read them properly and at leisure.  However, J&SY is a mighty tome and set the standard for the bookshelves that were to be built.  In addition, there are David Thatcher's cruising guides plus some others, along with several other 'oversize' books that, for various reasons, I want to keep. They could all be put into lockers, of course, but I'd prefer to get to them more easily.  The space at the forward end of the forecabin (once set aside for a sewing machine, that, alas, would not fit easily) seemed to offer the perfect solution. 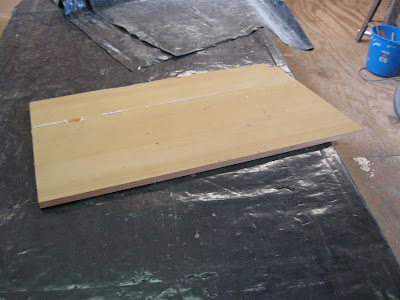 I had some kauri left over from doing the drawer fronts so I glued it together (using Gorilla to save a bit of time.) Having framed up the area, I carefully fitted the two shelves. 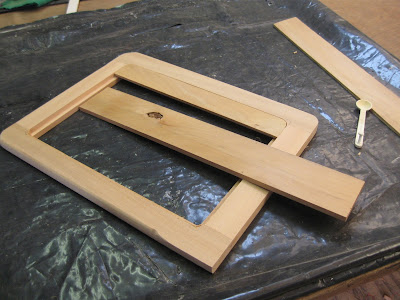 Having decided that I had insufficient left for the end of the cabinet, I scouted around and found a bit of kauri panelling that was a bit too narrow to use elsewhere, but could be used to make a perfect endpiece for the shelves.  I glued up a frame and then routed round to make a rabbet in which to set the panels. 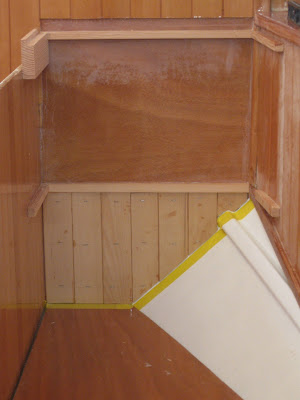 Because the whole area had been intended to be an enclosed locker (and The Great One disapproved of the weight of the kauri panelling) I then had to panel the space under the shelves, which will be seen.  Again, short ends that I had refused to throw away came in useful for this. 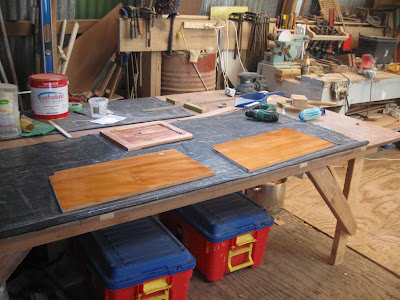 This is where my patience was tried.  I was more than ready to assemble the whole lot, but the panel is better coated on the flat and the bottom of the shelves required a good thick layer of epoxy to ensure that they stay stable.  At least I won't have to varnish them!

So time to go and actually start gluing it all together!

Posted by Annie Hill at 1:38 pm No comments: