A fine start to the season


I decided to spend the winter with Fantail hauled out this year.  There were a variety of reasons for this: some of them worked out, some didn't, but it saved me getting even more fouling on the boat, being bullied by the harbour master and worrying about dragging my anchor.  (Not, touch wood, that Fantail has yet done that.)

As usual, in spite of being out for so long, there were outstanding jobs uncompleted and a mad rush to get everything done so that we could go back in.  One of the jobs I did do, was to take the mast out and change the masthead fitting.  You may recall that I had a half inch bolt sheer off a few months ago.  Well, now all the bolts have been removed and instead of metal at the masthead, I have heavy a webbing strap, securely sewn, around the top, with loops for the shackles sewn to it.  (Yes, I know, stainless steel shackles, but a girl lives in hope!) 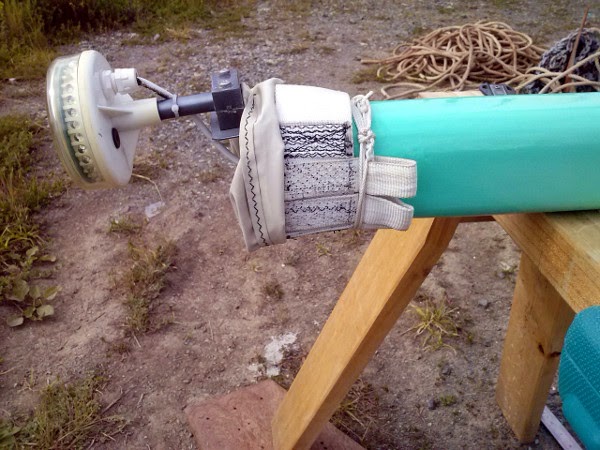 I dressed the mast once more and then rang up the friendly and obliging Bruce Yovich to come along and pop the mast back in.  Bruce has a miniature crane which is just perfect for this job: it's the real McCoy with a jib that extend to three times its telescoped length, but costs a fraction of the full-sized brute.  Anyway, along comes Bruce and 15 minutes later the mast is stepped.  I took extra pleasure in this speed and simplicity: a nearby ketch, restepping his masts, had had a crane in for 3 hours the previous day!

On 25th November, the great team at Norsand Boatyard, who had kindly tolerated me being on my boat all winter, carefully put Fantail back in to her proper element.  They have a cunningly designed trailer that gets under the boat's cradle, trundles her down to the slipway and then slowly slides her back in to the water.  It's all a lot less nerve-wracking than watching one's pride and joy swinging through the air in the slings of a travel lift. 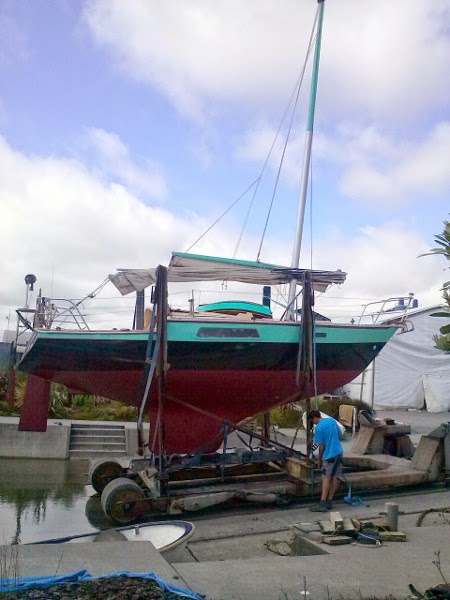 It was great to be back in the water and ready to go.  I pottered around with a few more jobs waiting for the SW winds to go away and on a fine December day, set off down the harbour to catch up with Zebedee at the Hen and Chickens - a group of islands about 7 miles from the entrance to Whangarei Harbour.  Well, that was the plan.  We left Parua Bay about nine o'clock and whizzed out with a strong ebb tide under us.  The forecast NW wind was in fact NE, once we got out of the lee of the land, but we could lay the islands without too much problem.  The chart showed a couple of possible anchorages, possible only in northerly conditions, after several days of light winds so that there was no swell running.  It is, as we all know, a naughty world, but I've always felt that I could rely on charts produced under the auspices of Her Majesty's New Zealand Navy; however on this occasion I was disappointed.  Sailing in confidently to anchor in somewhere under 8 metres, I was more than a little surprised to see my (resolutely Imperial) echo sounder reading 36 ft.  I dropped the sail, which seemed reluctant to come down - just what I needed - and motored further in.  And further and further.  By this time we were less than 100m off the beach with rocks all round, a gusty wind and still with over 30 ft on the echo sounder.  I don't like anchoring in such deep water and I couldn't imagine Alan being happy to sail into this constrained place and - worse - having to sail out of it again, especially with the high ground to the north of me making the wind very fluky.  So, somewhat reluctantly, I abandoned the attempt. I sent Alan a text by cellphone and he confirmed my guess that he'd prefer not to try it either, so I hauled the sail back up and sailed back, the wind having disobligingly shifted to the NW, so that once again I was pretty much close hauled.  We planned to spend the night in Smugglers Bay, well-placed to take tomorrow's N wind down to Kawau I and the Hauraki Gulf for a little cruise in company.  Zebedee got there a few minutes before me, having sailed down from Whangaruru, and he and Pauline came over for dinner.

The wind in Smugglers had died away as I was sailing in, so I'd come in under power.  Again, the sail seemed reluctant to come down.  It had the horrible clack-clack-clack sensation that I've experienced before: it means that the sheave is badly damaged.  I didn't wish to believe this: surely there was another explanation?

Next morning dawned clear, with a light N breeze.  Perfect to get away.  The forecast was for the wind to strengthen considerably later, but if I left straight away, I should be under the lee of Kawau I before it filled in.  I shortened the anchor chain and raised the top few panels of the sail to sail out.  Once the anchor was in its roller, I went back to the cockpit to raise more sail.  This time I knew I wasn't mistaken: the sail refused to go up any further; indeed, I wondered if it would come down.  I sailed back, explained my predicament to Alan and then sadly set off back up Whangarei Harbour.  I had no spare blocks on board suitable for the job, so I'd have to buy some more.  And in the river, I had the chance of very calm conditions to go up the mast.

Back at anchor I ordered the blocks, which arrived the next day.  A Canadian cruising friend happened to be in the river, so he offered to haul me up the mast the following morning, when it should be calm.  All went according to plan; I managed to do the job at the top of the mast without succumbing to a panic attack - I absolutely loathe going up the mast - and came down before anyone went screaming past leaving a big wake, or the wind filled in.  I showed Chris the block: the sheave was absolutely shattered.  Obviously the sun had attacked the white plastic and made it brittle.  The odd thing was that last time I'd used it, it had seemed fine, and I'd have thought it would have been protected from the sun by the rope running over it.  I was glad I'd made the decision to replace both. 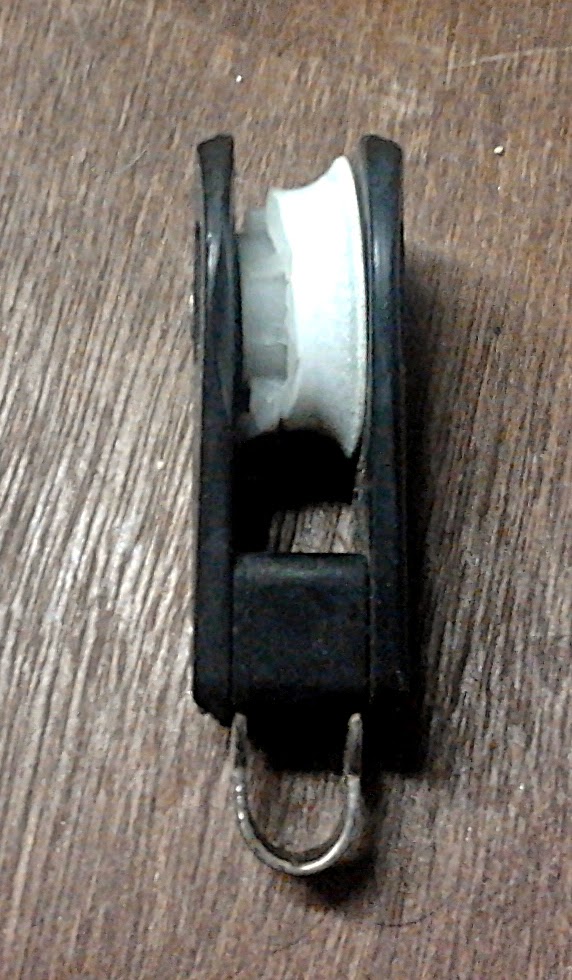 That afternoon I topped up my diesel - once I'd started heading up the harbour I'd motored as there was no way I could have beat up with only 3 panels of sail - and water, and was ready to leave.  That was nearly a week ago!  Since then we've had dreadful weather and I've been happy to be tucked up way up the harbour while gales and storms have blown around us.  More gales are forecast, followed by light winds and rain, rain, rain.  What's happened to summer?  I'll be lucky to be out of Whangarei for Christmas at this rate!