The Waiheke junket had been a great success, but there had been too little wind to try the boats out and several boats hadn’t managed to make it. The general feeling was that we should try again in a few months. By then La Chica should be shaken down, Shoestring should have a few more miles under her belt and Footprints would be about ready to leave for New Caledonia. A junket was pencilled in for 5th August (my birthday), but the date was altered to a fortnight later to fit in with Footprints' schedule.

Holding a junket in the middle of winter is a bit ambitious: the days are short and the weather unpredictable. I voted it should be held in Whangarei harbour, which has several sheltered anchorages and meant that the bigger boats would come to my neck of the woods instead of my sailing down to theirs. It also meant that Pugwash , the smallest boat in the fleet should be able to attend. As the time approached there was a flurry of emails and text messages as the forecasts remained unremittingly bad and the Auckland boats wondered if they would ever get a chance to bolt north. Fortunately, Sunday 18th August came in with a fair SW breeze and they romped up north having a wonderful sail. Fantail was less fortunate, the wind dying away on her, and poor little Pugwash didn’t get away until after dark, due to the fact that the last-minute preparations took a trifle longer than anticipated. As I approached the rendezvous in Urquharts Bay, the two junks sailing in company came in the other way. Accompanying us were the designer of Shoestring and Footprints, Gary Underwood (http://gary-underwood-designz.co.nz/Home) and his wife, Beryl, aboard the ex-fishing boat, Mason Bay and Pete on the catamaran, Putangitangi, who is interested in junk rig. The fleet anchored together and Roger from Shoestring and I gathered aboard Paul’s La Chica to discuss their passage up and imbibe a few warming drams. 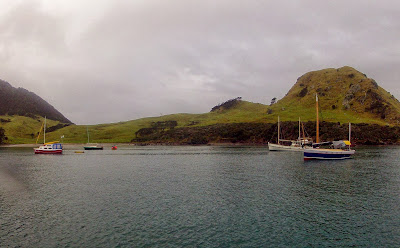 The fleet from La Chica

The following morning dawned flat calm and only the lightest breath ever materialised the whole day. Was it to be a repeat of Waiheke? Roger invited several of us over for breakfast, which was just about ready when Marcus finally rowed Pugwash alongside, looking like some sort of weird water beast as the oars moved up and down, the rower completely hidden under the canopy to keep him dry from the steady drizzle. 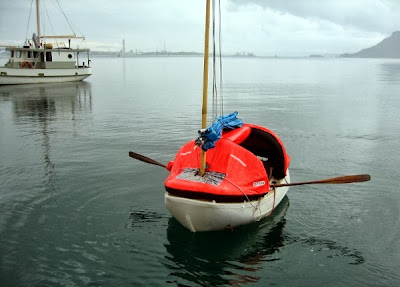 Breakfast over, Shoestring’s designer (and dog) were ferried aboard in Fantail’s new dinghy, Fan-tan. (Peawaka has joined La Chica because she can be carried securely stowed during LC’s planned non-stop circumnavigation). Fan-tan, at 1.5 m may seem a little diminutive to carry two large men (and dog), but managed admirably.

In due course, Mason Bay pottered off to refuel and we heard from Footprints that they had made a fair wind of it and gone straight past us en route for Opua. So it was decided that Shoestring and Pugwash would go sailing. In fact the former made full use of her 9.9 hp outboard, and the latter rowed off across the calm sea somewhat faster than we motored. We drifted about somewhat aimlessly, while Pete struggled to understand the many advantages of junk rig that were assiduously pointed out to him. But the rain lifted and the beer went down, so we all had a lot of fun. 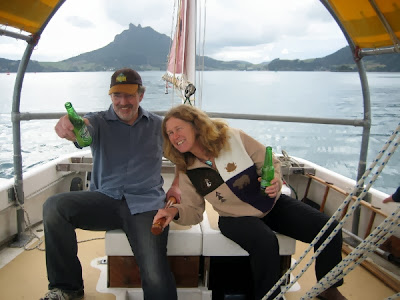 Even Pugwash – all 8 ft of her – had problems finding any wind and seemed, at one time, perilously close to a large ship that came into the harbour, but Marcus assured us that he was well out of the channel at the time. 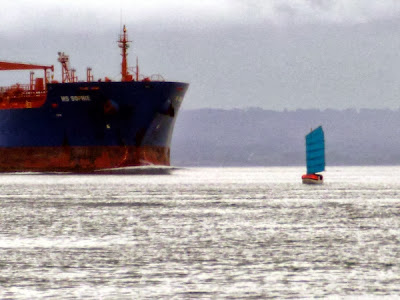 We all went back to anchor and in due course assembled around the wonderful wood burner aboard Mason Bay for drinks and nibbles, admirably dispensed by Gary and Beryl.

The intention had been to amble on to another anchorage on the following day, but there was a less-than-pleasant forecast for the next day: Peter decided to get back to Auckland and after a quick discussion on Fantail, the rest of us set off up the river for Whangarei. Little Pugwash set off first, followed by Fantail, La Chica, Shoestring and Mason Bay. The wind was about F3 in the anchorage, but picked up quite dramatically outside with some strong gusts that caused a fairly spectacular broach from a somewhat over-canvassed Shoestring. As we went tramping past Pugwash, we must have made a brave sight. 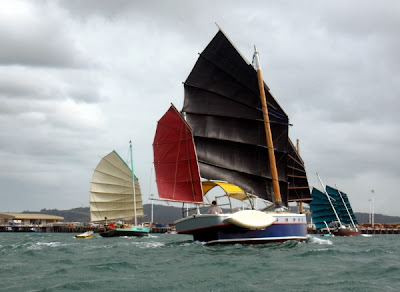 The fleet from Pugwash

Paul was determined to test his new rig, Shoestring had the bit between her teeth, and a school of dolphins played around her, but Fantail was quite happy to keep her speed down a little: 6.8 knots seemed a tad excessive and the daffodils might have come out of the vase if she’d heeled too much. 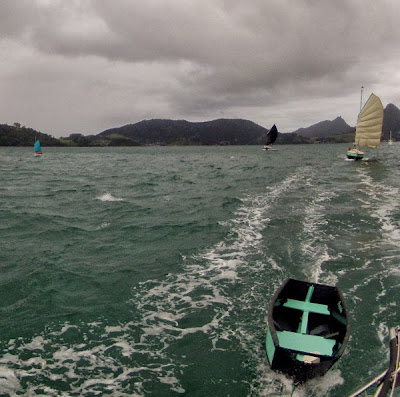 The three larger boats anchored within 5 minutes of each other (while Mason Bay continued on to the Town Basin) and we were still pottering about tidying things up when Pugwash came in sight: over the 12 miles that we’d sailed, she was only half an hour behind us. The little boat had skipped over the shallows, but even so, must have tramped along at times. Marcus reckons that junk rig has as much of a place on a small dinghy as on a larger vessel and that its instant reefing makes the boat much more capable. 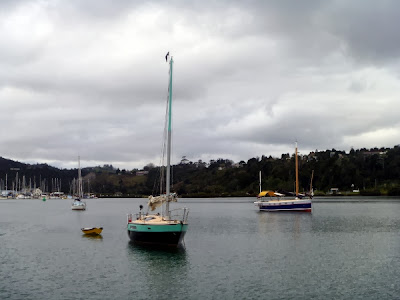 Shoestring and Fantail at anchor.

The next day was cold and windy and most of us hunkered round, but we all foregathered in Marcus’s boat shed for a memorable curry. The following day was spent ashore with a final meal aboard the good ship Shoestring, where Paul cooked a considerable fondue. The following morning, Shoestring headed back towards Auckland, the junket voted a considerable success all round, the only question being when and where shall we do it again!
Posted by Annie Hill at 1:11 pm 2 comments:

Several people mentioned my little stove, or 'pot belly' as Kiwis call them, regardless of shape.  I'm afraid you can't go and buy one off the shelf.  Mine is made of 6-inch rectangular-section, steel, with a thick plate welded top and bottom, and some holes cut out of it.  (The rectangular section, by the way, is square.  Engineers!  Go figure.)  At the top is a 2-inch hole cut out for the chimney.  With a larger boat, or a bigger stove, it should certainly be 3 inch, because it will soot up at the drop of a hat.  However, most of the year I don't need my fire and I didn't want it totally to dominate the saloon.  It's perfectly happy burning hardwoods or charcoal - and I would guess coal, although I haven't tried that - but it doesn't take kindly to Radiata: the pine generally available in NZ.

Towards the bottom, at the front, is a cut-out about 2 inches high for the ash pan, and a U-shaped piece slides along either side of this to close it off.  It also works as a damper if the fire has just about gone out and I didn't notice.  A couple of inches above this are 5 holes, forming a circle with a threaded one in the middle.  A plate welded to a threaded rod fits over this and this is the true damper, which works extraordinarily well.  The door, 5 1/2 inches high, is set down an inch from the top, and the plate that was cut out of the section has a flange all round it, to shut against the stove.  A handle was bought from the local stove shop.  The grate was also bought from a stove shop and cut to fit, and the stove is lined with thin fire-bricks.  It's very successful and takes surprisingly large pieces of wood.  With first-rate firewood such as manuka or gum, the fire can burn for an hour at a time.  On a larger boat, I would use 8-inch 'rectangular' section and a 3- or 4-inch chimney.

I'm still using my fire last thing at night and early in the morning, but by 10 o'clock it's warm enough for shirt sleeves.  We are now into daylight saving, which I love.  I know it's not rational - the days are exactly the same length, but even with my on-board life I am still part of society and need to know what time it is, if I have to go to the shops; and so I tend to rise and go to bed in harmony with those who live and work ashore.  Anyway, regardless, I love daylight saving and look forward with delight to six months of long evenings.

And with the more summery weather have come morning calms, than which are few things more blissful.  I love to sit in my companionway to watch the sun rise, with a cup of steaming Lapsang Souchong in my hand.  Or get up before the sun and drift on the tide down the harbour.  In the distance I can see the wonderful rocky outcrops on the top Whangarei Heads, and the Hen and Chicken Islands. 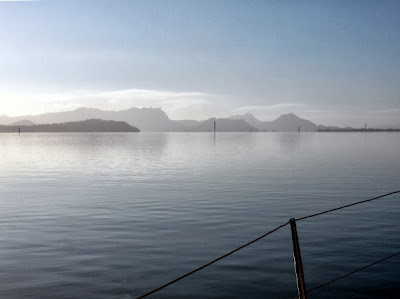 It was sailing past this beautiful landscape, when I was delivering a boat from the Bay of Islands to Auckland, that convinced me to leave Tasman Bay and to come north.  It's a decision I have yet to regret and every time I see these dramatic pinnacles, I rejoice once more in their fascinating and romantic shapes.

The calm mornings also give me an opportunity to  varnish around my toerail, which is a lot easier to do from a dinghy than leaning over the side of the boat.  I like varnish, and I like varnishing, but am astonished at not only how few people do, but even more, how many people seem to take it as a personal affront when I state my preference.  The vehemence with with my choice is opposed makes the objections that are made to my choice of rig quite tame in comparison.  But I think wood looks beautiful varnished and, even more, is protected by it.  The so-called 'scrubbed teak' (ie neglected teak) look is not something I find appealing and it also causes the wood to weather badly.  And wood stains are an affront to teak.  My toerail (really, a decorative band of teak between hull and deck) had probably never seen a lick of varnish since the day the boat was launched.  It had weathered very badly and I wonder what would happen if it had got much worse, so that it started to split.  It would be both difficult and expensive to replace.  However, because it was teak I could sand it back and varnish it, and now it will last as long as anything else on the boat.  It also looks a lot prettier than it did and gives me pleasure every time I row away from my boat. 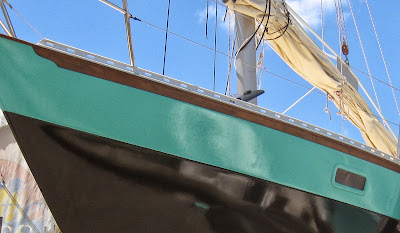