Yes, you did read that correctly.  Just over 2 weeks ago, a tornado swept through the boatyard leaving a trail of chaos and destruction.  It was pitch dark at the time and I had just knocked off for the day.  We'd been having a few thunderstorms and as I waited for the water to heat up so that I could wash, the shed was hit with a tremendous gust of wind, apparently pushing the wall in towards me, immediately followed by rending and crashing noises.  I assumed that part of the shed had been destroyed and went downstairs to look.  I opened the door and the torchlight showed me a heap of plastic canvas and broken timber.  Not my shed, but the one next door.  I picked my way through the debris and made a careful circuit of the shed.  The only damage appeared to be torn plastic canvas.  Looking around a bit further I could see boats had fallen over.  My first thought was to check Shirley: Speedwell was just fine and Shirley had barely noticed anything other than a big gust.  Going back to my shed, I met the yard manager looking at the wreckage of Tony's shed.  It was he who told me that it must have been a tornado.  Fortunately,  it was followed by total calm, which lasted for about another 15 hours.  I then  phoned Tony, who came straight away with his partner.  From what we could see, his boat appeared OK, but it was hard to tell.   Tony has worked very hard on restoring the boat he inherited from his parents: that it could be seriously damaged didn't bear thinking about.  (In fact, by some miracle, the boat was barely scratched.)  My guardian angel had obviously been there for me and I went back upstairs, poured myself a stiff drink - and started to shake as the reality of what might have happened, started to sink in. 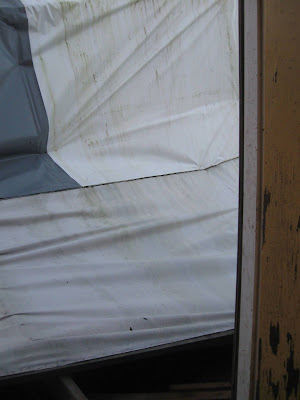 The photo above was taken the following morning, but you can guess how I felt when I first opened the door.  About 8 boats had been sucked up and dropped  down again, capsizing their cradles in the process. 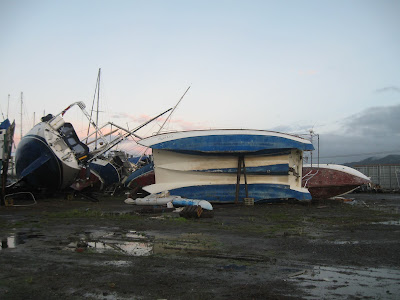 A Prout catamaran had ended up on its side 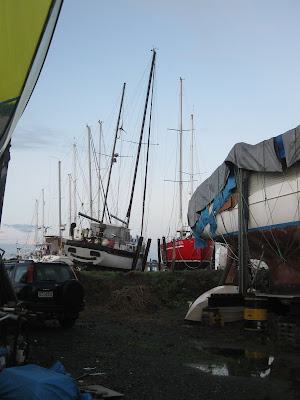 Two boats were more fortunate and had only been shifted in their cradle. 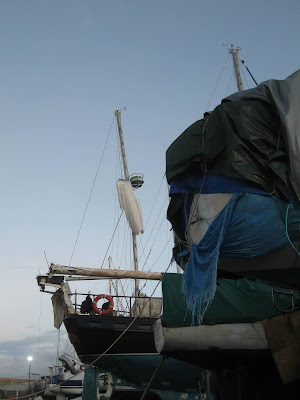 A dinghy that had been sitting on the foredeck of a boat on the other side of the shed, had been swept up and left entangled in the rigging of a ketch some distance away.  Now, in daylight, I could see the mess that had been Tony's shed. 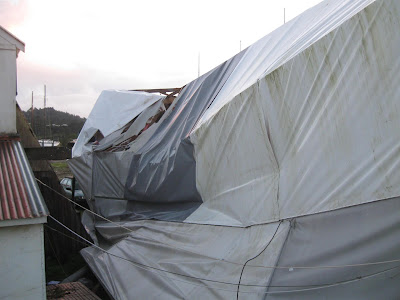 It was amazing that the boat had come through more or less unscathed. 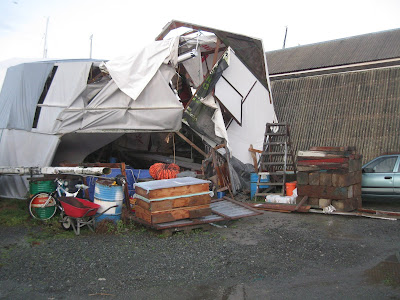 As I mentioned, I could only be grateful that the tornado had effectively missed me.  So I went back to building my boat.
I had noticed, on some photos of real Chinese junks, that the different colours were separated by a small strip of wood, often painted white.  This struck me as both attractive and practical,  making painting easier without using vast amounts of masking tape, so I decided to do the same.  The strips look more pleasing when slightly curved, so I laminated up strips of Douglas fir.  (Shirley,  when she saw what I was doing, shook her head and commented that it was no surprise that I am still building this boat!) 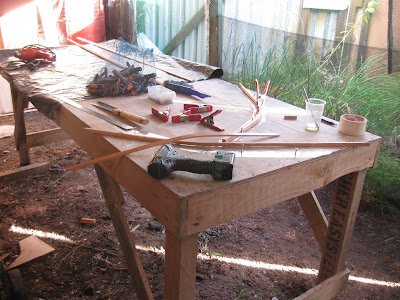 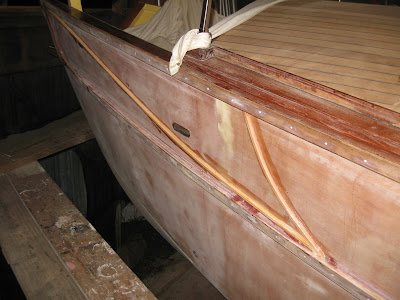 I sanded them all up and fitted them, using a few panel pins and epoxy. 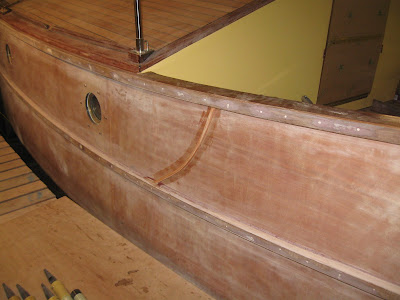 I was very pleased that they looked as I'd hoped they would. 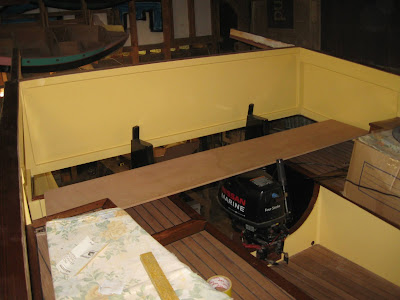 I have now reached one of those stages where everything I want to do depends on something else being fitted, or at least decided upon.  I  am putting a bench across the lute, to stiffen and support it for the sheets, but to do this, I really need to know just where the tillers will be and that is complicated by the fact that the trim tab tillers need thinking about as well as the placement of the self steering gear and, while we are it, the access to the davits and the position of the solar panels, which might affect that. And,  of course, the BBB has to be able to tilt forward to 180°, without interfering with the steering mechanism,  itself complicated by the fact of having two rudders.  David nobly offered to make the self steering for me, saving me vast amounts of time and anguish and mercifully it arrived a few days ago.
However, while I was exercising my brain about all this business at the stern, Marcus came to do some post-tornado repair to the shed.  Gordon, who owns Tystie,  has been here building himself a new dinghy and suggested I take advantage of having two sets of hands to load the bilgeboards into their slots.  What a brilliant idea! 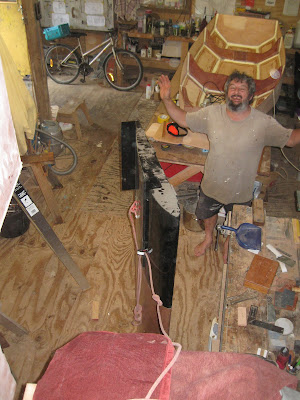 We tied some ropes to the block and the fitting already on the boards. 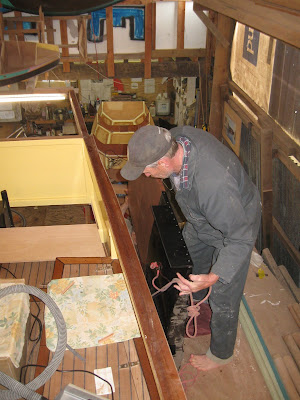 With Marcus heaving from below and Gordon tugging from above, the boards were raised to deck level. 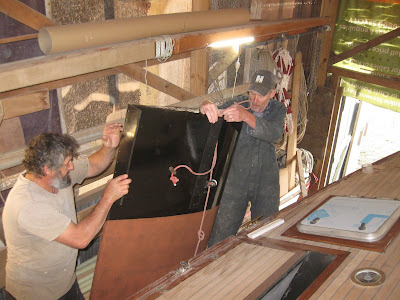 With two strong and capable friends, I even got the chance to grab a couple of photos. 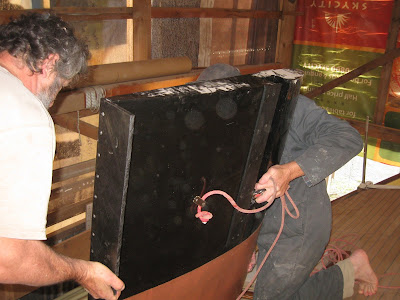 We used cloths to protect the deck and there was just about enough to hold onto on the boards that they could be moved with some precision.  The black plastic that  Marcus is holding also acts as the stop for the board. 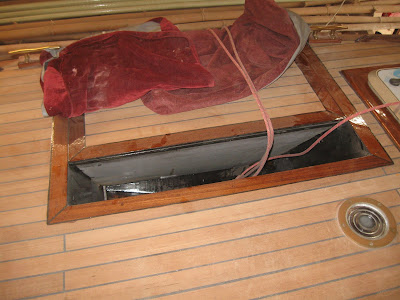 It caught up slightly on the wedge at the bottom of the case, which supports the downhaul block. 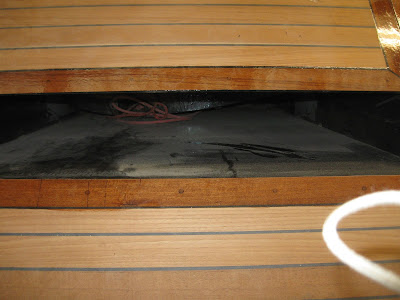 Once that was dealt with, the boards slid w-a-y down in the case!  The stop, it would appear, is in case the rope slips or breaks, rather than where the board would normally be. 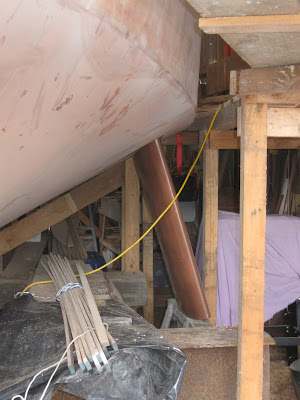 We heaved them  back up to a more acceptable "draught" and propped them up on saw horses, until I can sort out rigging them.  This has every promise of being quite a mission, so I'm putting it off for the moment while I carry on getting the stern sorted out and the topsides ready for painting. 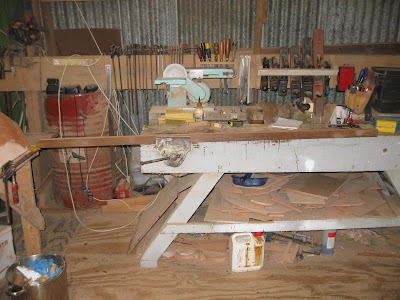 Last weekend,  some other friends were in the shed and we started discussing the dinghy and the davits.  Moments later and my little dinghy was taken down from the wall and busy hands were fetching rope, making knots and threading blocks.  It was decided that although the dinghy is shorter than the distance betwwen the davits, she would not need a beam for the falls, but that they would work just fine from the davits themselves.  This was a relief, because I had been wondering just how hefty the beam would have to be to hold a dinghy that might possibly be pooped by a big wave.  A beam is still required for mounting the solar panels, but it can be much less substantial.   So I laminated something from 2 long lengths of kauri left over from another job, with teak on top. 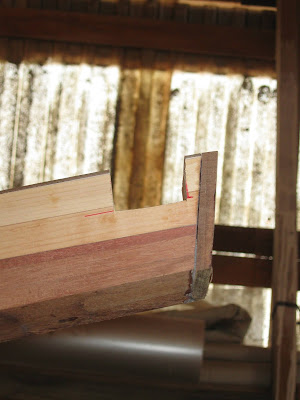 I notched out the davit to receive it. 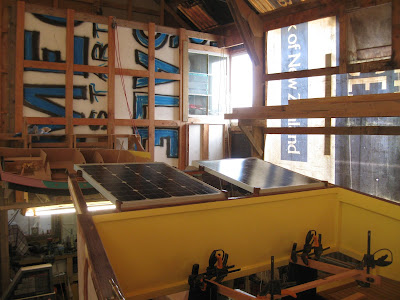 I fitted the beam and affixed chocks to it and to the lute.  This photo shows the panels in place.  They are held securely by the chocks forward and will be lashed to the chocks aft.  I don't really want to screw through the alloy frames.  Not only will it damage the anodising, but a few years hence and the screws will probably be impossible to remove because of galvanic action between the dissimilar metals. 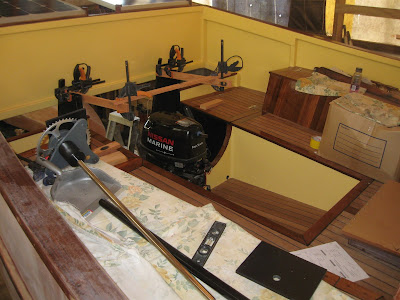 My wonderful self-steering gear is in the foreground.  Over the engine is "thinking in action", while I try to work out how and where to link the two rudders, how to make a tiller, how to have it raising and how to set everything up so that I can get access to the hull by the engine, where I may need to stand on occasion.  Indeed,  I suspect that I will have to go there to attach the davit falls to the dinghy.  And, of course, I also need to decide where the bench goes, and the self-steering, and how it will be linked to the trim tabs!  And this is meant to be a simple boat! 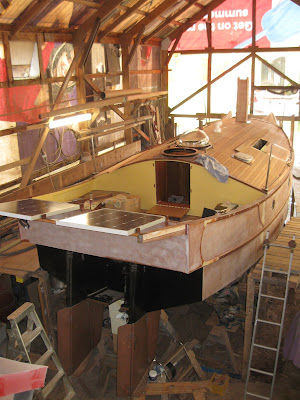 I'm quite pleased with how the solar panels fit.  They are not too intrusive.
Last time I blogged, some people said that the layout wasn't working on their computer screen.  Blogger have a new system.  It's hard work sorting it on this tablet as it is (my computer died a few months ago).  I've tried a different way of doing things and hope it works. If not, then you will have to read it on a phone or tablet, I'm afraid.
Posted by Annie Hill at 7:44 pm 3 comments: