I haven't posted recently because my last two Sundays have been taken up with my Enjoying Myself.  Shame on me.

A fortnight ago, it was my birthday, and friends Maren and Rob invited me for a birthday soiree, along with Marcus, Graeme and Roger - good friends and fellow junkies.  Maren greeted us with astonishingly strong cocktails, and I was given the chance of a long soak in a hot bath.  What a treat!  The rest of the afternoon and evening were spent eating, drinking and talking, while watching the sun set in the distance.  There is the most wonderful view over Whangarei Harbour from their house - ever changing and ever beautiful.  We all stayed the night, had a splendid brunch and sat around looking through the NZ JRA library, which is housed there.  Some lovely books about Chinese junks with great photographs.

Roger and Graeme came to view progress on SibLim on their way home, and by the time they left, I'd decided it was hardly worth doing any more.

Last weekend saw the Winter junket.  A commendable four boats made it.  I was going to opt out, having done nothing the previous weekend, but was persuaded by the thought of Shoestring's wood burner.  Marcus and I towed Freebie down on a trailer and were joined at Scott's Landing, Mahurangi by Graeme.  By the time we'd rigged the boat, it was blowing great guns, and Marcus was more than happy that he had traded with Walter for Pacific Spray's 2 hp outboard, which drove us manfully over to where Shoestring lay comfortably anchored.  La Chica joined us some time later, and we all snugged down on Shoestring, with the fire burning away.  It was no day for sailing.

However, the next day dawned flat calm and we decided to go out and see if we could find some wind. 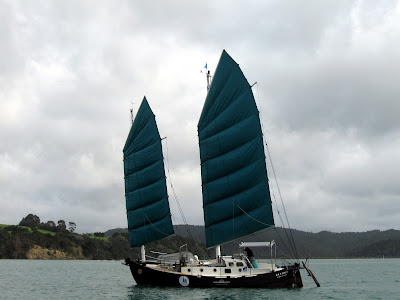 La Chica was first away and as she does astonishingly well in light winds, she soon headed away from us up the harbour.  Her weight lets her continue through the calm patches until she finds the next puff of wind.  Sadly, this may be the last time that La Chica will be attending one of our junkets.  Paul fitted her out meticulously, for a single-handed, non-stop circumnavigation, and having got her absolutely ready to go, decided against it.  His cat didn't fancy the idea, and he's come across his 'ideal boat', which is going to be for sale fairly soon - and likely to be snapped up if he isn't around.  All in all, he's decided to spend his time living on board and pottering around NZ, rather than being 'one man against the ocean'.  La Chica must be bitterly disappointed and is looking for a new owner.  She is, as they say, ready to go.  Just add water.  Anyone looking for an 'expedition vessel'? 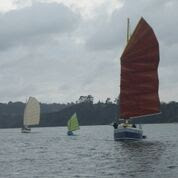 The rest of us followed along behind.  Shoestring has been languishing for a while, awaiting a new mast.  Finally stepped a couple of months back, Roger has been getting back into the swing of sailing her.  She is using her original flat sail, while he decides what experiment to try next.  (The weedmat sail is being used in the garden, now.)  One of his experiments that interests me is the bamboo battens he is trying out.  They grow plentifully around here and in fact are a weed that people are often more than happy for you to remove.  So they are free - and they look wonderful. 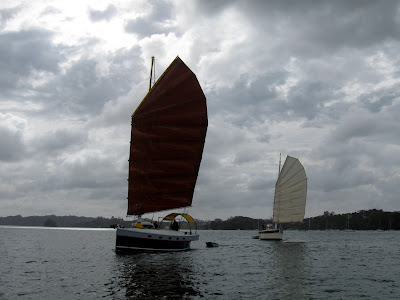 Footprints sailed over from her mooring to sail with us.  I was steering Shoestring, but I'm afraid I couldn't get her anywhere near her sistership when we were sailing to windward - admittedly in very light winds.  However, the wind picked up a bit later and we did better.  Turning back down the harbour the two boats were much better matched with a free wind.  David is an excellent helmsman and knows his boat well.  She sails like a witch. 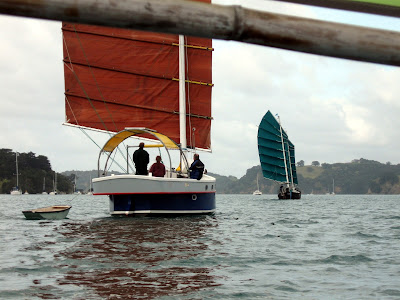 We all sailed back to anchor again, and foregathered on La Chica for an hour or so, before Marcus, Graeme and I sailed Freebie back to her trailer.  This photo is taken from Freebie showing his bamboo batten: they were thrown into the sail in April with no preparation and still going strong! 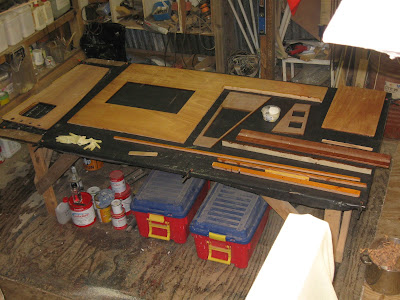 I had made a kit of parts for the starboard side of the heads.  'All' that is required is to put a total of four coats of paint on.  Each side of most of those pieces.  I have had second thoughts about painting inside the lockers - it all takes so long - but thus far I'm sticking to my resolve to do so. 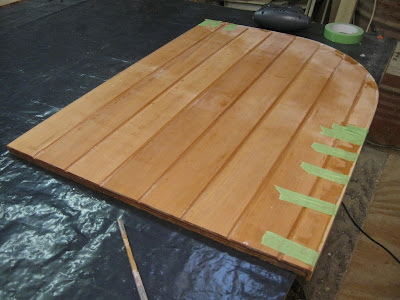 I had been putting off capping the plywood on the little bulkhead next to the composter, simply because I've never done anything like this before and was scared of making a hash of it.  However, I planed down some short lengths of kauri to the correct thickness and laminated them around the curve.  When the epoxy had gone off, I trimmed the excess and glued on straight pieces at either end. 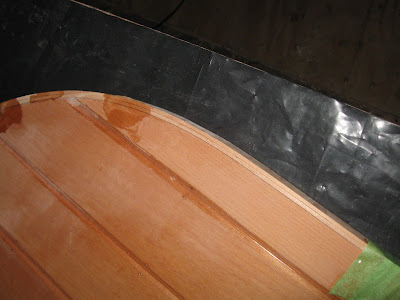 I was very pleased with the result.  I put stainless steel staples in the first layer, to secure it so that it didn't slither about when I came to put on the second layer.  But masking tape held that in place with no problems.  And of course, epoxy is gap filling! 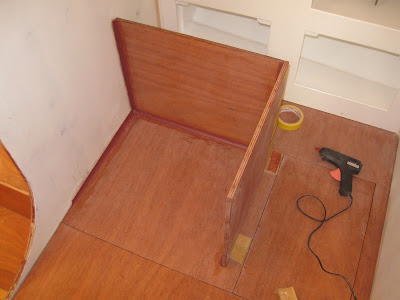 To locate the panels of the composting toilet box, I used a hot glue gun to stick pieces of plywood to hold it in place.  They show up well in this photo.  I've found that it's worth covering them with packaging tape - the glue comes away easily and can be pulled carefully off the furniture.  If you glue directly to the wood chocks, the glue can sometimes stick so well to your finished surface as to damage it. 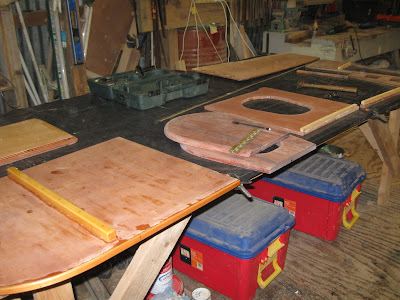 With as much of the composter glued into place as I could, I was ready to start painting.  It's much easier to get a decent finish, hand brushing two-part polyurethane on horizontal surfaces than vertical, so I'm doing as much as I can in advance. 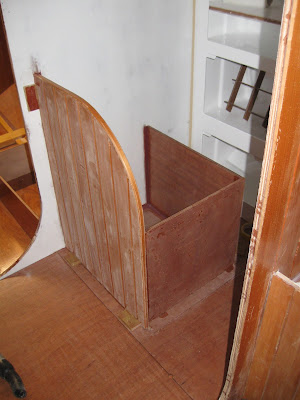 Some of the bulkheads had already been primed, but there's still a lot of painting to do before the rest of the furniture can be installed. 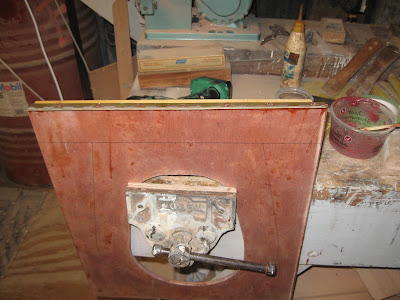 Marcus found me some piano hinge, which I used to hinge the toilet seat and also to hinge the lid, which goes on the top of the composter. 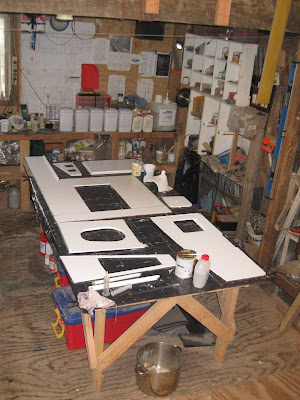 One of the problems with doing all this painting, is that it somewhat takes over the workspace of the shed, meaning that somehow I have to work around it.  Although polyurethane soon becomes touch dry, I have to remember not to make dust until it does, and then to check to remove any dust before I paint. 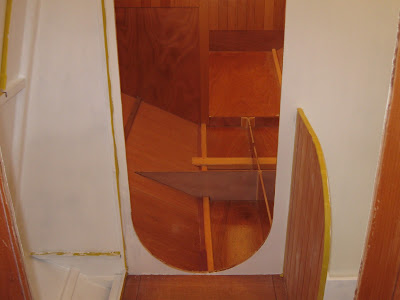 I am going for a satin finish outside on bulkheads, deckhead, locker fronts, etc.  Not only will it look less stark, but it will somewhat disguise the paint strokes. 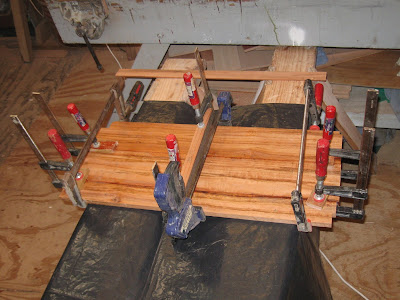 Forward of the electricity box is a small counter.  In theory, once the boat is wired up, that will be it, but should I need to do anything to the wiring, it will be good to be able to put down the necessary tools and work on the switch panels with everything to hand.  Gluing the wood together at least didn't create dust or require my big table.

There is still more paint to apply, but I'm hoping to start fitting everything in place, soon.

Posted by Annie Hill at 4:40 pm No comments: