You may be wondering why I haven't posted for so long.  (There again, you may not!)  Well, the reason is that, in all honesty, laying a teak deck is a long and very unphotogenic business.  There was really nothing to write about.  But now it's all down and you are allowed to ooh and aah, as I have been for the past few days! 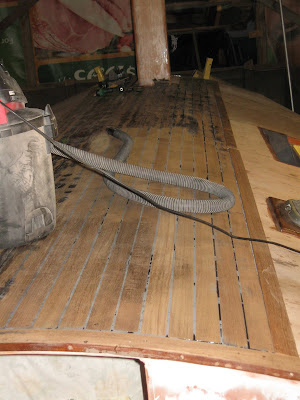 Early on in this process, I decided that the idea of leaving the sanding until the end of the project was a bad idea, for two reasons.  The first was that as time goes on, the epoxy gets harder and harder and the second, as I discovered the hard way, is that it's easy to make a mistake as to where two planks join.  After I fitted one about 6mm out, which doesn't sound much but absolutely shouts at you, I started a routine of gluing, sanding and filling before moving on to the next set of planks. 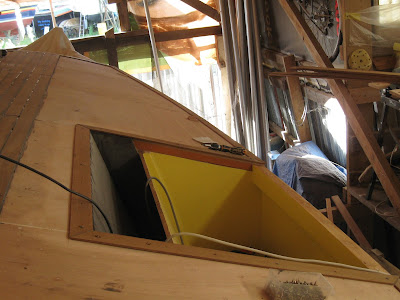 Framing round the deck boxes was tricky - mitres are always a nightmare and, yes, I got one of those wrong, too!  I never said I was a boatbuilder. 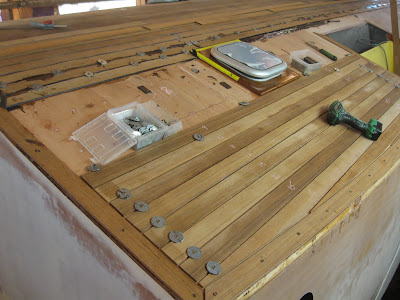 You may recall that I bought a job lot of decking teak (thank you, Zane, for drawing my attention to it), which is nearly all beautiful, quarter sawn stuff.  It was too thick and came with a little rebate.  I had it sawn down the middle (at vast expense), so ended up with half at about 48mm and half at about 42mm.  I divided it in two and did sums, but knew I had only just enough for the centre deck.  That being so, I fitted all the longer lengths first. 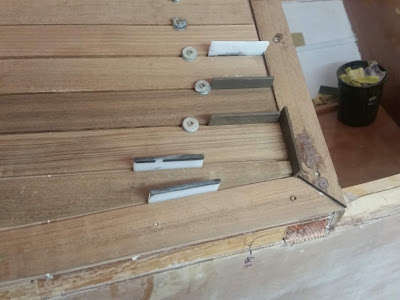 I used plastic spacers to try to keep the gaps even and washers under the screws held the planks down until the glue went off.  Because I couldn't reject any of the planks, I had to use some distinctly warped pieces, which means that the black lines wobble more than a little in places! 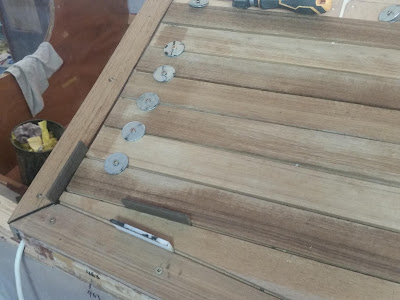 These two photos are also a bit swanky - I was impressed (and astounded) that the final planks were almost the same on both sides. 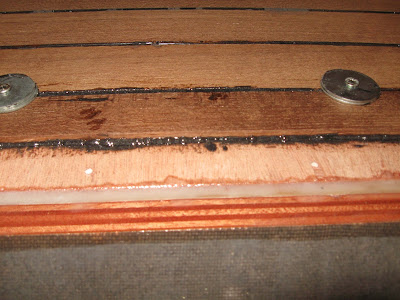 Generally, I used 'penny' washers, because they spread over more of the plank to hold it down.  I have zillions, but still ran out occasionally and had to use smaller ones.  Because the sub deck is only 10 mm thick, I needed to use 2 washers to stop the screws from going right through. 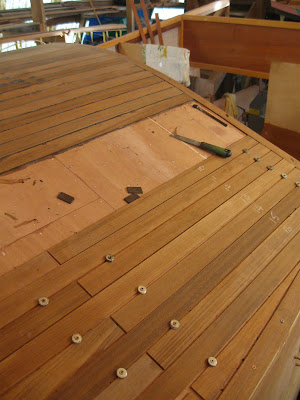 I was worrying about my supply, so started fitting large areas at a time so that I could make some sort of plan (I'm not sure what!) if I didn't have quite enough.  Thankfully, I did. 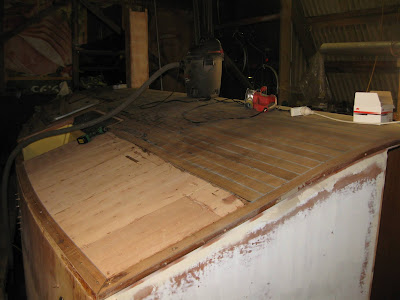 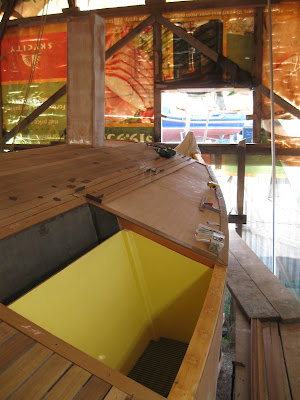 I was very relieved when I got to the bow and realised that I would have sufficient wood - and even some left over for the deck box lids, which had been a concern. 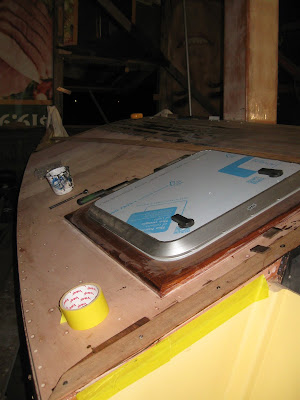 Fitting around the big hatch was a little tricky. Because some of the wood was so stubbornly warped, the planks had crept a tiny bit out of parallel, so some fudging was required. 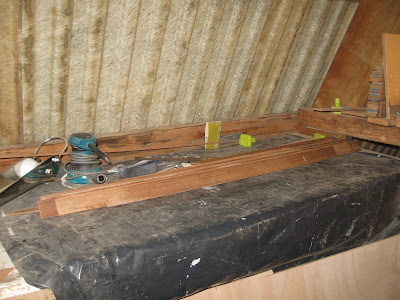 With the shorter lengths, it was easier to apply the glue on a bench and carry them across to the deck.  Whatever I did, it was a pretty messy job and carbon powder is very dirty stuff to work with. 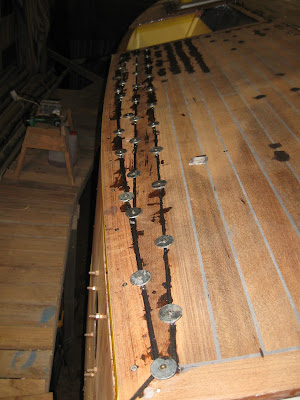 These are the final pieces going into place on the starboard side. 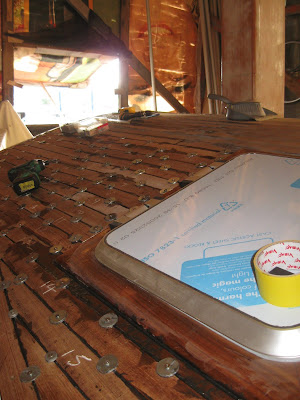 And here they are on the port side.  I am pleased to say that these matched, too.  I hadn't been entirely sure that the cabin front was symmetrical and true, so this was more than a little reassuring.  Not that it matters, but it's nice to know. 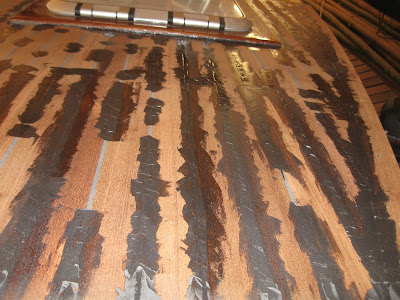 The filled gaps ready for sanding. 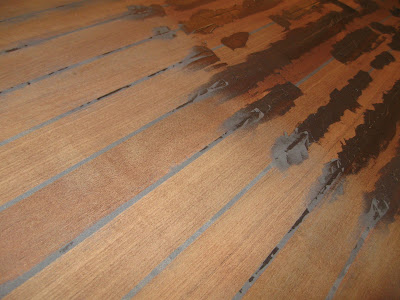 Before and after sanding.  It's a tedious and grubby job, even with the vacuum cleaner attached to the sander, but immensely satisfying to see the nice, clean teak emerging from all the black mess. 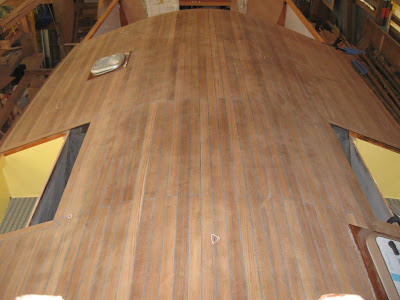 And, finally, the whole deck is covered in teak. 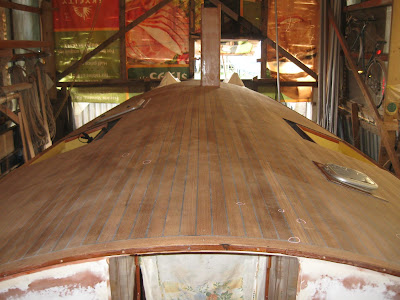 I must say, that I think it looks absolutely wonderful.  What is it about teak decks that is so attractive? 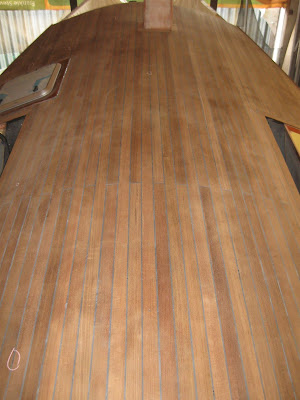 It's the sort a deck a superyacht would be proud of - in my humble opinion.  OK, so I'm blowing my own trumpet, but what the hell.  I'm not only very proud of my achievement, I'm truly delighted with the result.  Already I know it was worth all the grief and hard work for the pleasure it will give me on a daily basis.  Gloat, gloat, gloat!!!