The Year Comes To An End


(Please excuse the formatting: I tried for hours, but Blogger just isn't cooperating with me today.)
Well, eventually the weather did improve sufficiently for me to escape North. On the 19th December, I sailed up to Tutukaka. Sailing into the rather confined harbour of, with the wind from astern, and trying to anchor ‘further in’ to be away from wakes and the swell, I could successively reef the sail to approach my chosen anchorage at a sensible speed.  At the end I sheeted hard in – easy to do with so little sail – and rounded up, dropping the last three panels of sail.  These are unsheeted, so there was my sail, neatly stowed, while I went forward to drop the hook.

Tutukaka was pretty rolly in the left over swell – we’ve had a lot of E recently, but not as bad as it has been. Next day, Ladybug and Melody sailed in and I was invited over for dinner on Melody. I left bright and early on the following day for for Mimiwhangata and as I ghosted out the others followed suit. 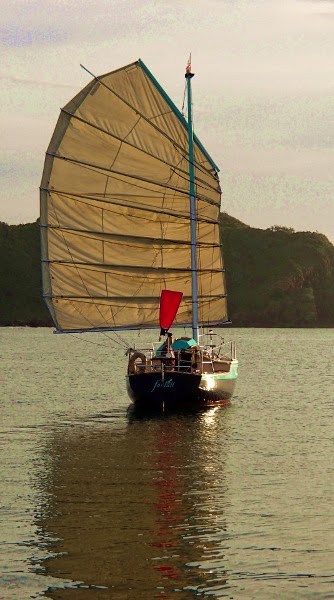 It was a run up the coast.  Melody tacked down wind and Ladybug poled out his sail, he said in order to try and catch me up because normally he can’t be bothered.  But he didn’t catch me until the end of the passage, when we were both close-hauled.  But at 34ft against 26ft, so he should, and even then he didn’t outpoint me. The conditions were perfect for Fantail to show off.  We sailed in to the anchorage together and he rolled up a lot of his jib to make it easier to tack.  Then he rolled it up for his final approach to anchor.  I was waiting for him, tacking back and forth and finally reefing, to let him anchor first.  He spent 10 minutes sorting out the mainsail and covering it while I drank my beer.  The second boat came in about 15 minutes later and it took them several minutes to sort out their cutter rig and finally to come in to anchor under mainsail alone.

They came over for dinner, and we had another pleasant evening. They left the next day for the Cavalli Is. 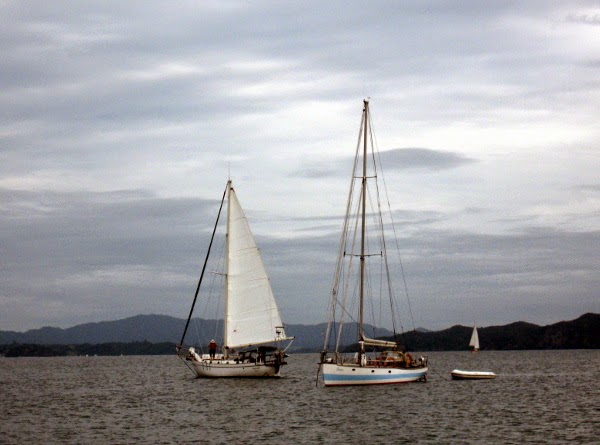 and in the afternoon, I ambled over to Whangaruru for Christmas. It was a lovely, quiet spot and I thoroughly enjoyed myself cooking good food and relaxing with a book I’d bought as a treat. I even had a couple of presents to open!! 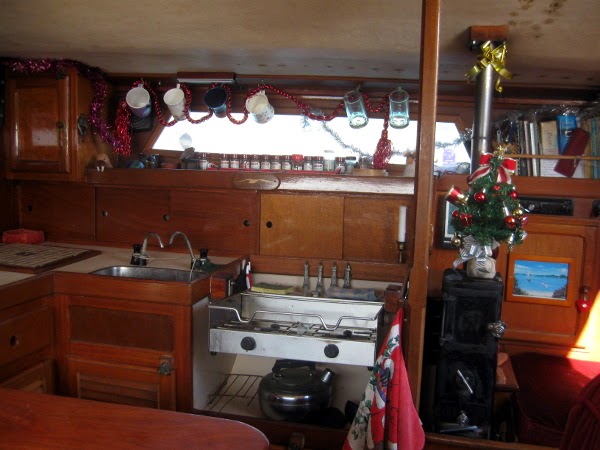 I took a couple out for a sail, while I was there. They were very impressed with the ease of tacking and the uncluttered deck.  I think they liked running the most, because they said that they really hate fooling around with poles, especially at night.

I left a few days later and sailed down the harbour and round Cape Brett into the Bay of Islands. The almost non-existent wind of the morning had turned into a great F3 and everyone else was motoring downwind with an onshore swell, I had a fine sail. In fact if anyone wants to know what the greatest advantage of junk rig is over anything else, I reckon the last week or two's sailing has told me what it is: it's fun!  And the reason it's fun is because it's so easy.

Coming to the end of the day, I sailed through the Waewaetorea Passage at the W end of Urupukapuka I.  Ahead of me was the only other boat sailing in the Bay: he gybed three times, which would have been pretty scary in that narrow passage with the swell-driven waves breaking quite dramatically on either side.  I sailed ridiculously by the lee (I was showing off and could have gybed) and then headed up for my anchorage.  He dropped his sails and motored in: I had the prettiest little beat between the shore and a heap of anchored boats (four tacks in 200 yards) and dropped sail and anchor in about 15 seconds.

The bay was very crowded, with all sorts of vessels at anchor, but it was actually nice to be among people who were busy enjoying their boats. 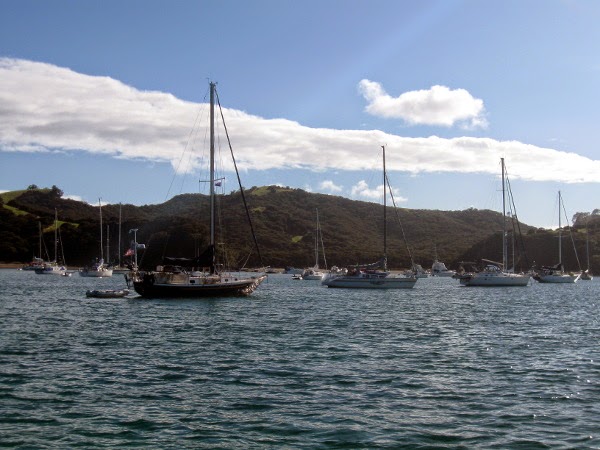 Much better than seeing them all sitting in marinas. Close to the beach there were two large rafts of launches. I reckoned that we were in for a noisy night, 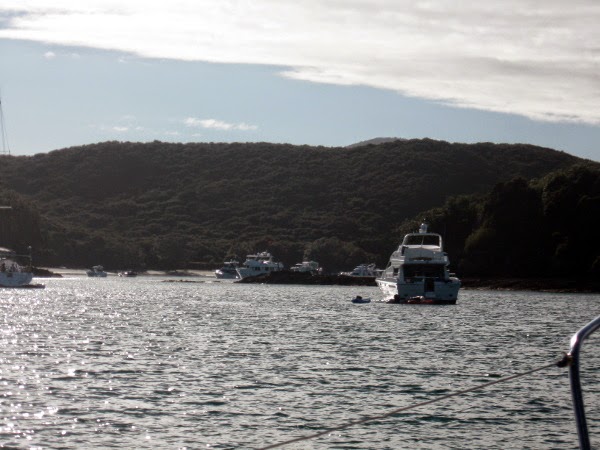 but I couldn’t have been more wrong.  Either the parties ended early, or everyone went below because by 10 o’clock all was quiet.  No buzzing outboards taking people back home, either.

In the morning, as I went to shorten in my anchor, I could see it clearly, lying on the clean sand bottom.  The water was crystal clear: we could have been in the Caribbean, especially with the sun already hot on my back. 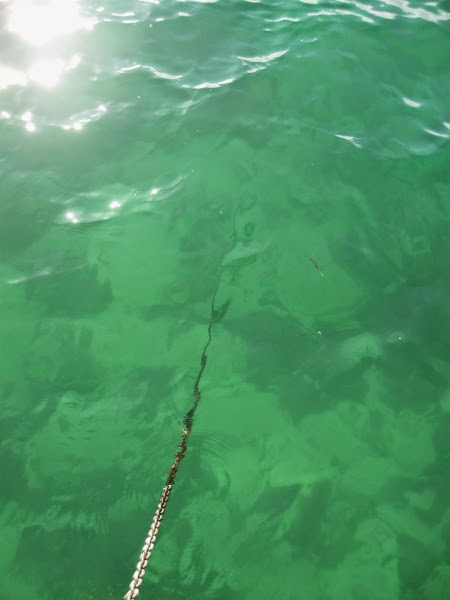 Leaving Otaio Bay, I raised the top 3 or 4 panels of sail.  The breeze was very light, so I didn't make off the sheet.  I’d shortened up the chain and set the self-steering gear to take me out on the port tack.  Waiting until we went through the wind, I hauled up the last few feet of chain, catted the anchor and went back to raise the rest of the sail, freeing the helm so that I could nudge the tiller with my foot as we sailed between some anchored boats.  Two people were watching as I raised the rest of the sail and hauled in the luff hauling parrel.  We were now on a dead run, so I could let the sheet haul out to its stopper knot.  Leaving the helm I nonchalantly went below to fetch a cup of tea, in the hope that they were suitably astonished at the ease of it all.

Later, when the wind had picked up, we were romping along and overtook a 38 footer motoring downwind, probably because he uses hanked-on headsails and they weren’t hanked on.  It must be quite an effort to get the bag on deck, hank on the sail, raise it and sheet it in with only a few miles to go.  I sailed around an interesting little barque at anchor before beating up into my chosen anchorage, but foolishly tried to photograph it with my phone, so it didn’t come out.  I gradually reefed as I came in to anchor, so that I could ‘park’ exactly where I wanted.

Here I stayed until New Year’s Day.  As the New Year came in, I broke out a wee bottle of bubbly and drank a toast to my little ship as the fireworks exploded over Waitangi.  2014 had been another wonderful year.
Posted by Annie Hill at 10:12 am 8 comments: