Every week, I try to post new photographs in my 'albums' on the Junk Rig Association's website. The outfit that hosts our site seems to keep moving the goal posts and what works one month, doesn't work the next.  The last few times I've uploaded photos to said albums, they've appeared in a totally random fashion.  One of my fellow members has suggested a way round this, but the whole thing takes forever, anyway, and I'm simply not prepared to delete all the photos and reload them.  Life is too short - especially when you are building a boat!  So for those of you who have tried to follow progress via the JRA, my apologies.

I didn't write about the wonderful Russell Boating Club's Tall Ships Regatta, that has also become the major junket for the NZ 'chapter' of the JRA.  Suffice it to say that it was excellent.  I only attended for a couple of days - being a busy boatbuilder - and the weather on the evening that I arrived was dire, but I enjoyed the whole event tremendously.  The bad weather had prevented our newest member of the fleet, Blondie from sailing up there (I hope to have some photos of her to show you some time), and Fantail's new owner (did I mention that I'd sold her?) had yet to take her over; neither La Chica nor Shoestring could make it, but we had quite a fleet for all that: Arcadian and Footprints from NZ, Tystie and Zebedee, who despite wearing the red ensign are almost Kiwi boats and Lakatao and Grand PHA from France, each on an extended voyage.  The latter I've already mentioned - Bertrand is a member of the SibLim Club - but I fell madly in love with Lakatao, which, while a Western design (Le Forrestiere) has many characteristics of a Chinese junk: 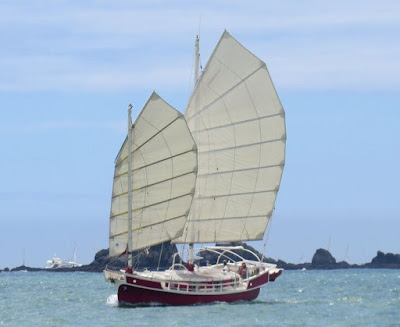 Her owners, Bruno and Elise are wonderful people and there is always laughter on board.  I found her incredibly inspirational for my own build, although I will never attain the craftsmanship of Bruno.

Back to Whangarei and my boatbuilding.  Because not everyone will want to follow my JRA links, I thought I'd just post a few photos here, so that anyone interested can follow my (glacial) progress.  The good news is that the money is holding out and I always knew that this project would take a long time, regardless of the other people who reckoned I should be able to 'knock it over' in a year.  I'm really enjoying the process, and that's the main thing. 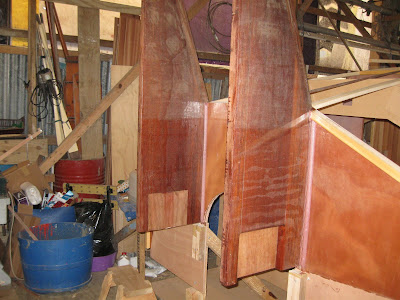 At the end of December, the Icebreakers came along and fitted the skegs, thus earning membership of the SibLim Club. 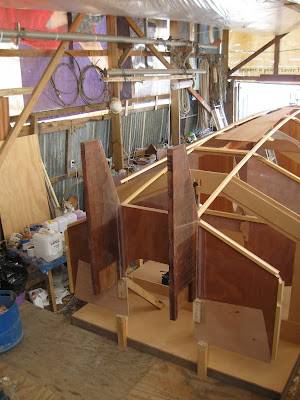 Because of the junk bow, which is flat rather than pointy, the planking is put on starting with the bottom and I got into this, early in January.  Aft, I could use 12 mm plywood, but forward, where the bottom rolls into the bow, I had to use 6 mm because of the extreme curve.  On this photo a piece is laid out, ready to fit. 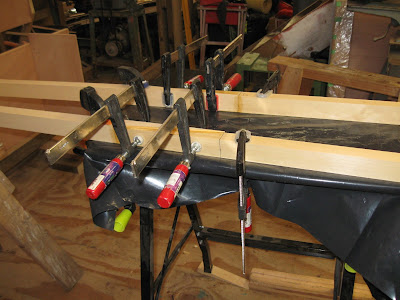 Before any further planking could be done, however, it was necessary to install longitudinals: a chine log, stringer and sheer clamp on each side.  These were laminated where necessary, in order to bend the wood to the curves of the hull.  The Alaskan Yellow Cedar that I buy comes in lengths of around 4 m, so once these were sawn and planed, they had to be scarphed together, as in the photo above.   WEST epoxy is my glue of choice, largely because I know it and can anticipate how it works.  I've tried other brands in the past but never got on with them as well. A lot of February was spent joining and fitting all these pieces of wood. 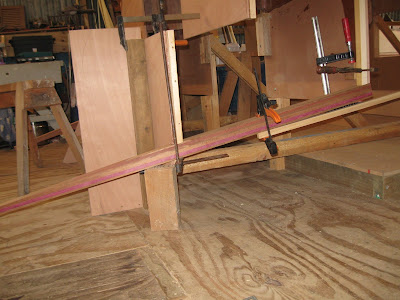 Come March and planking was in sight, but first I had to fit the sheer clamps.  SibLim is going to have davits and David designed them to be part of the main structure of the boat, running out from the sheer clamp.  I felt that these needed to be made from hardwood, rather than Alaskan yellow cedar and my friend, Marcus, contributed a variety of boards that he had stored away.  They varied from iroko to purpleheart.  I would be almost tempted to varnish them, just for their interesting colours! 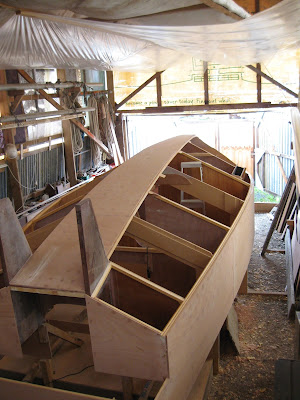 So here we are in April, and the boat is starting to take shape.  It's really exciting to see what she looks like.  My little camera has quite a wide angle lens, which somewhat distorts the appearance of the hull.  In fact it's rather less beamy aft than it looks in this photo: indeed it's rather 'cod's head, mackerel tail' in appearance, which I very much like.

I never thought I'd find myself building another boat.  I most certainly never thought I'd find myself building another boat on my own, although to be perfectly honest, without good friends lending me a hand at certain critical moments, I don't think I could.  However, in essence I'm building this boat by myself and I have to say it's an incredibly satisfying process.  I'm not a clever woodworker: indeed I'm barely competent, but thanks to wonderful epoxy (yes, I know it's very toxic), good advice and the tendency of 12 mm plywood to fair out any wobbles, my boat seems to be pretty sound so far.  Because I know I will remember every bodge, every short cut, every 'she'll be right' moment, I am doing the best work I can and, thus far, I think I will be able to trust it.  Oddly enough, my greatest (irrational) concern is that there are no fastenings.  Badger had no fastenings and relied entirely on glue, and to the best of my knowledge and belief is still in one piece, so I'm not sure where this worry comes from.  I can actually see myself, one dark night, rushing round with drill and screws, shoving in fastenings left, right and centre, just before I put the glass and epoxy on the hull!
Posted by Annie Hill at 8:23 pm 11 comments: