Supposedly, women are very good at multitasking, but there are exceptions to every rule.  In some cases I am on par with the best of my sex, but when it comes to building a boat, I  find multitasking exhausting and distracting. However, while it was easy to concentrate on one task at  time when I was, for example, laying the deck, I now find that I am in a situation where I have to do several things at the same time, because before I can do job A I'd need to sort out job B, but that depends on how C is going to be fitted, and so on.

Mark and Phil gave me a very handsome boarding ladder some time back.  Gordon had bought some fittings for a cockpit table that hadn't worked out and gave them to me to put "in stock".  I reckoned I could pair them together.  Gordon obligingly took time off from building his dinghy to cut down the top of the ladder to fit said fittings.  Of course, like so many simple jobs, what seemed to work well when offered up required modification for a final fit, but finally the fittings were put in place. 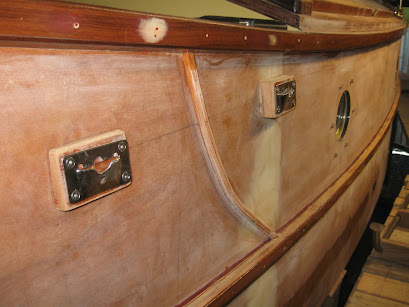 Before I could put any paint on, I wanted to seal the bare teak with varnish.  Before I could seal the teak, I wanted to be sure that I had put at least the majority of it in place.  Therefore, I had to think about how I was going to secure the solar panels on the davits, because they would be held in place with lashings and teak chocks.  (By the way, forgive me for the layout -again! - the new Blogger, added to the fact that I still don't have a keyboard, apparently still on its way from China, I assume by way of a wind driven junk, from the time it's taking!) Is giving me hell on this occasion.  Funny, I thought I'd got it under control last time I used it. 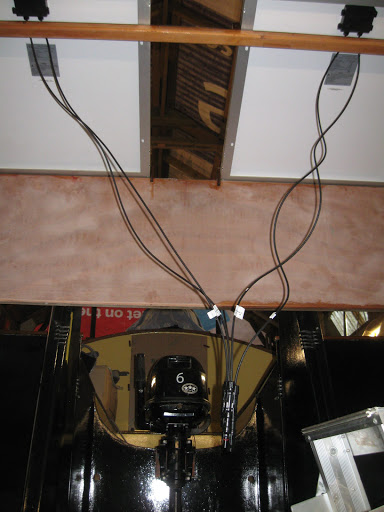 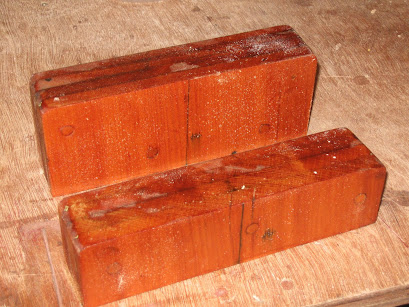 I also needed to work out where the self-steering gear was going to go,  because this dictated where the seat across the lute stern would go and this seat is essential to brace the lute for the mainsail sheet.  So I made some supports for the self steering mounts from kauri. 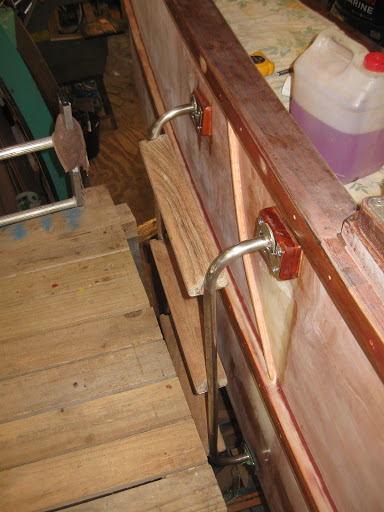 And here is the ladder in place. 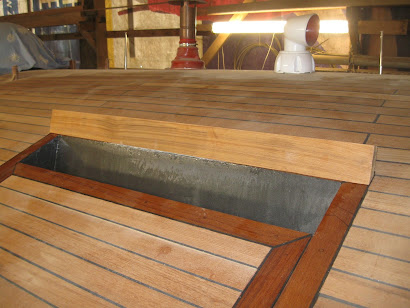 Originally, when I built the hull, the inside of the bilge board cases was extended about 6 inches, to take the blocks. This made it difficult to lay the decks and besides, I didn't think the plywood would withstand the force of someone heavy sliding against it.  With varnishing in the offing, this seemed like a good time to replace it with something stronger.  The thought of slipping down to leeward with the bilgeboards lowered, doesn't bear contemplating,  so I made a good strong base from some of my rapidly-dwindling stock of teak. 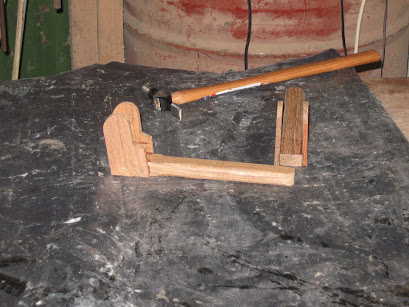 While I was working with teak, I made the 'rudder heads' and 'tillers' for the trim tabs.  You see what I mean about multitasking! 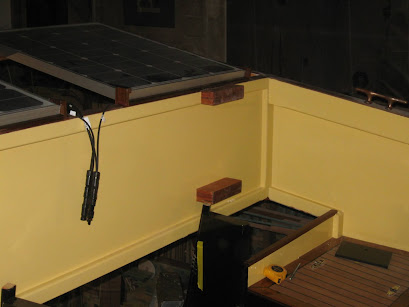 The supports for the  self-steering had been coated and were now dry enough to be glued into place. 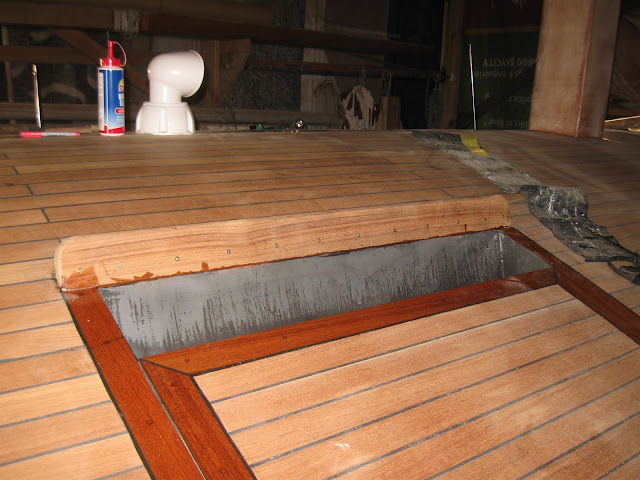 While I had the glue mixed, I fitted the teak by the bilgeboard cases.  They are backed up with a substantial lump of teak glued to the deck, so I believe that they will be amply strong. 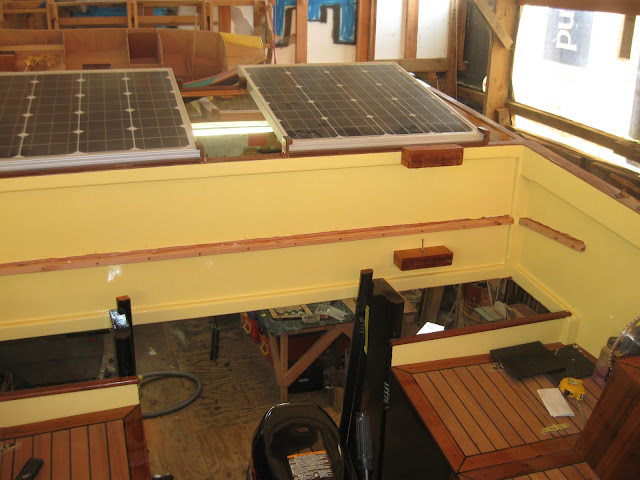 And various pieces of teak to secure the solar panels, although you will need to look quite closely at this photo to see them.  The little chocks at the forward end go over the corners.  Aft the chocks have holes drilled through them for lashings and I will attach saddles to the panels themselves. 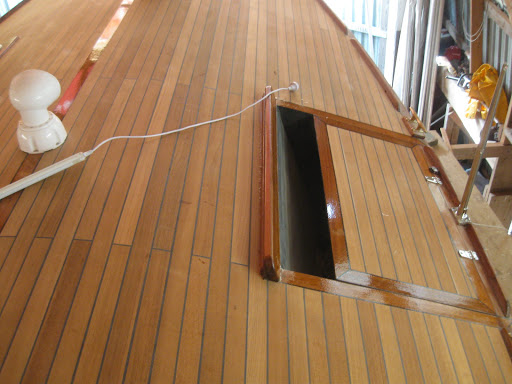 Finally, I could put some varnish around the deck edges to protect everything when I started to splash paint around.  It's a lot easier to scrape it off shiny varnish than bare wood! 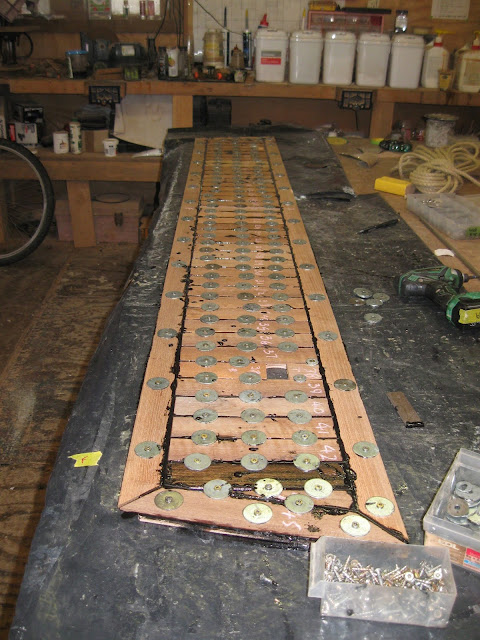 The next job was to lay teak on the seat.  I can see myself kneeling on this to work the davits and don't want it to be slippery.  It will also be a lot more pleasant to sit on than paint.  As well as reinforcing the lute against the loads of the sheet, the seat also protects the self-steering gear and trim tab rudders.  However, since placing it in position, I have realised that it makes having raising tillers very difficult, without involving engineering work.  Several people have suggested removable tillers, an idea that doesn't really appeal, but if I don't want them entirely taking over the cockpit, at anchor, I may have no other choice. 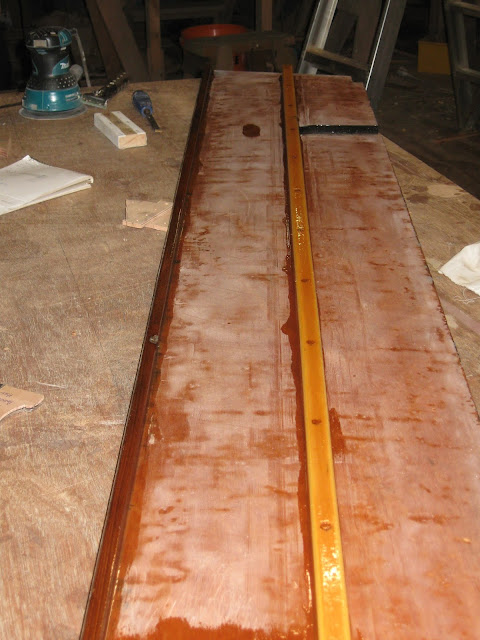 The cutout is to fit around the self-steering gear. 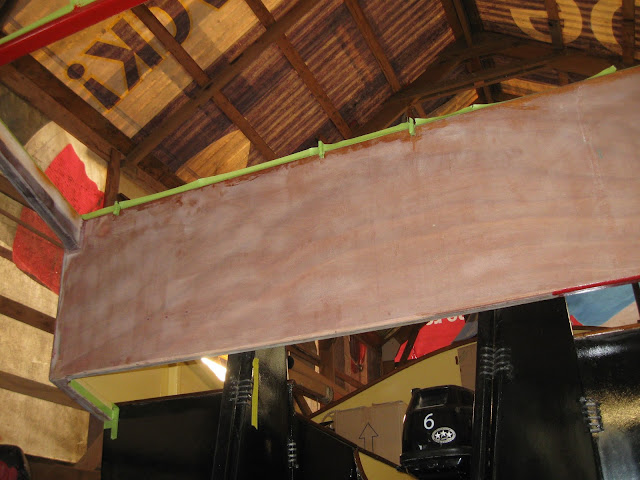 Then came a task that I loathe - putting masking tape on everything.  If I am recoating with one or two coats, I often avoid using masking tape, but I knew I would need several coats of paint to cover and that was too many to apply with the level of care necessary to keep it from slopping over the edge.  It took ages to apply the tape. 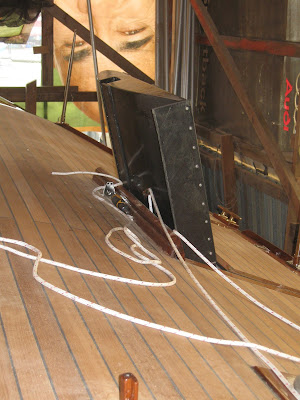 I made use of having Gordon around to help me start rigging the bilgeboards.  they are not lightweight and while David assures me it will all be different when we (and they) are floating, it is a bit of a struggle at present.  It was at this stage that I noticed a snag.  The idea for raising and lowering the bilgeboards is taken from the Red Fox design.  However, on that boat, a channel is moulded into the hull for the block that is a
ttached to the hull.  If I were to put a cheek block onto the teak support, the board would
hit it when it was raised.  Nothing is ever easy.

And that, I'm afraid, includes writing this blog.  I have had to load every photoraph at leas twice and they seem to be sized at random, with the preview telling me it's OK and the edit that I'm working on saying something else entirely.  I shall post what I've done and try again on Sunday.  If the final result is a complete shambles, I will try re-editin it.

Why do they do these things?  The old Blogger worked just fine :'-(