I've been trying out ideas, scrapping them, trying others, going back to the original and generally giving myself a lot of grief about the galley.  My friends have been tried to the limit by my vacillations and cries of woe, but I've finally come to some sort of a conclusion.  My only consolation is that I went through the same process for the saloon, and I'm now delighted with it. 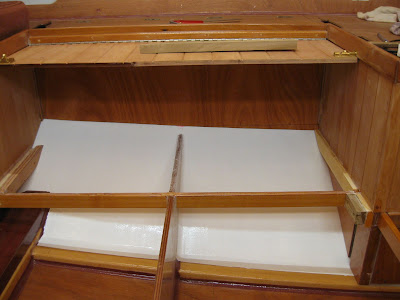 I'm not sure if I mentioned my cunning idea for extending the settee into a wider bunk.  But here it is in action.  I may require A Stick as well, to support it, but that can be easily arranged. 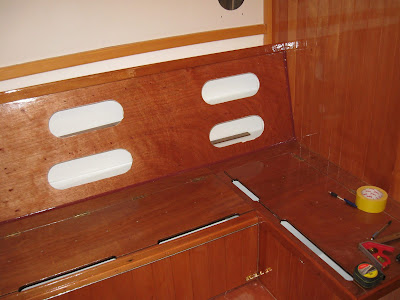 While I've been agonising, I've also been varnishing and am pleased with the end result. 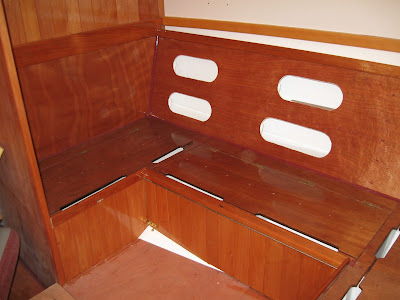 It will be fun choosing the fabric for the cushions.  I have no idea what I'll send up with and suspect that I'll be spoilt for choice when I start looking. 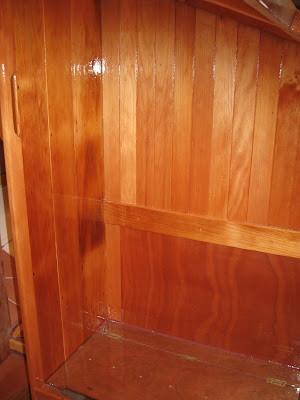 The kauri that Gordie gave me looks wonderful and the cosy corner produced by the bulkhead is going to be a favourite spot. 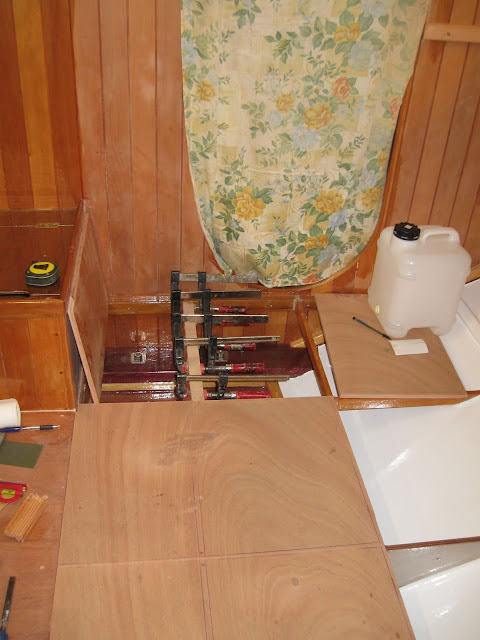 One of the knock-on effects of any decisions made is that the cabin sole has to be divided up into hatches to allow access to the bilge.  I plan to store most of my water in the bilge and reckon on having at least 120l.  Most will be in 10l containers like the one in the photo: the rest will be in 5l jerricans.  The piece of wood along the galley will probably be glued into place, because I can get at the hull from the centre, if necessary. 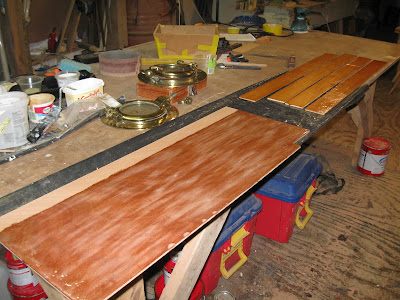 I wanted a stack of drawers in the galley.  Drawers are immensely useful and it's hard to have too many of them.  However, the galley counter is pretty wide and I didn't really want super-long drawers, so am making a wee stack at the forward end of the galley.  The original idea had been to use them for dinner plates, among other things, but I can't make them quite wide enough for that without sacrificing other things.  So the plates will have to go elsewhere.  Unfortunately, the portholes make putting lockers along the outboard edge of the counter impracticable.  However, one needs light and air.  I could put a locker in between, but I don't think it would look that good.  We shall see. Here is the bulkhead for the drawers, being panelled in kauri.  Now that I have a plan, I'm excited to get on with it!

One step forward, one step back.

Well, I guess if it were easy, everyone would be doing it.  After some nice progress, I seem to have been chasing my tail for at least a week, and my poor brain is hurting from all the thinking I've been having to do! 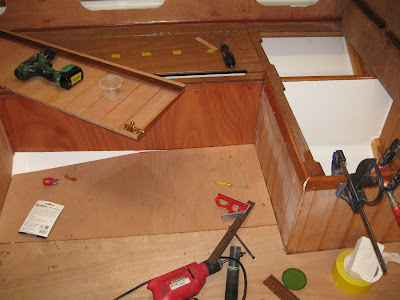 One of my ideas that has worked is to make a hinge-up flap to extend the dinette into a more comfortable berth.  Not a double - if I have two guests, they can use my cabin, but the dinette will now provide a bit more elbow room for someone staying on board. 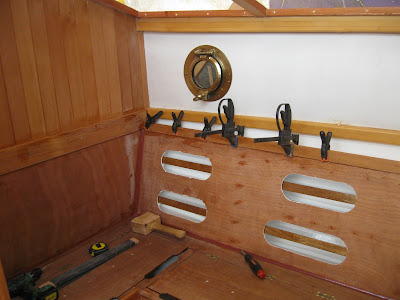 And I finished off the trim around the dinette, with a decent piece of wood providing a hand hold to the back rest itself. 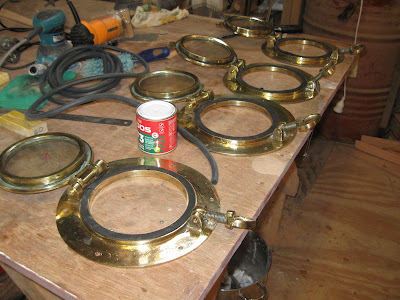 Then, with four portholes ready to install, I added the rubber to keep the water out.  These (peculiarly Kiwi) ports have two grooves in them, so I put soft, round rubber in the glazed part and harder, rectangular rubber in the other. 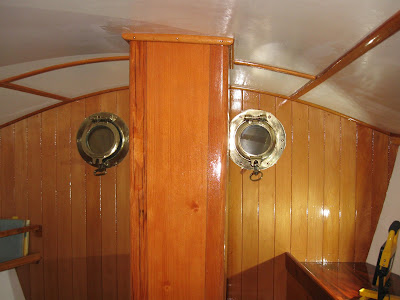 Finally I installed them in the forecabin, using my favourite Simsons Marine glue, which cleaned off beautifully when it had dried. 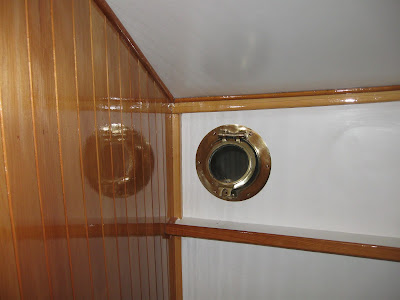 Now that they are fitted, they were worth all the effort, as, thankfully, is usually the case. 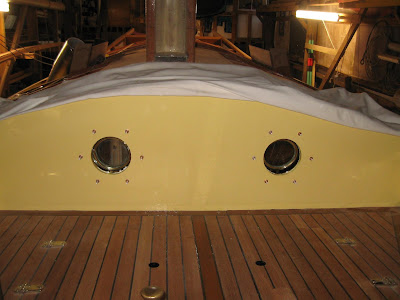 I shall paint the nuts, but I think the portholes look fine without any trim ring. 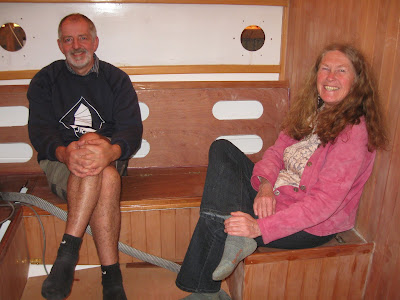 My birthday having come around, I sinfully took some time off.  My friends Rob and Maren gave a wee party for me at their house in Whangarei Heads.  Roger was also invited and drove me back, coming into the boat shed to see what I've been up to since his last visit. I hope this will be the first of many convivial chats in the saloon! 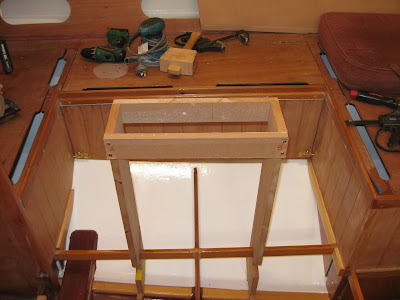 Hoping that I would be revived and invigorated by my break, I set about making a trial run for the saloon table.  This is what has been providing me with the headache.  It has to be big enough for four people, but the fore-and-aft bulkhead makes it impossible for anyone to access the seat next to it. 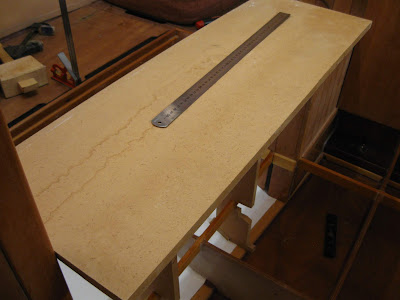 Pete had come up with an ingenious arrangement for a sliding table, that would allow access around its end,  but, alas, it protruded dangerously out from the companionway.  So it was literally a case of back to the drawing board. 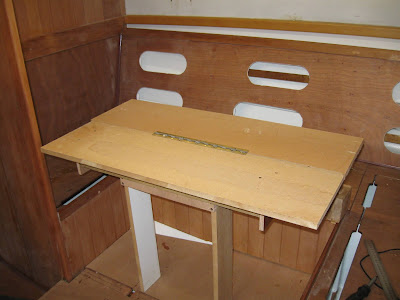 Mk II didn't survive long - the legs were going to stop anyone sitting in comfort. 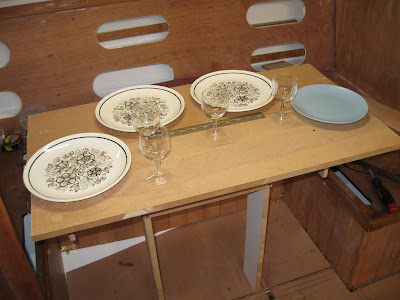 Mocked up with 18mm MDF, it seemed to work and there is, just, room for 4 people to dine.  In fact, I will probably have plates more the size of the blue ones, than the others.  People can always come back for seconds! 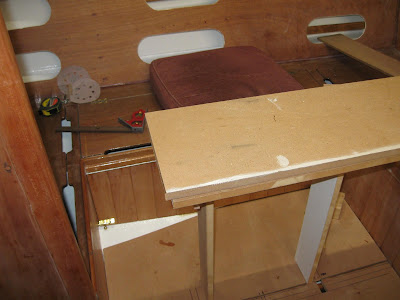 Here it is folded and slid forward so that you can get around to the seat. 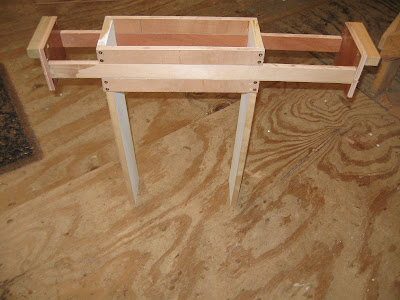 I made a few wee alterations and worked out just where the top should go and felt quite pleased with myself.

At three o'clock this morning, it occurred to me that the legs are going to be too close to the dinette to be able to raise the extension flap.  But I haven't yet had the chance to measure it. Maybe I can just redesign the legs.  Or maybe it's back to the drawing board again.  Sigh. 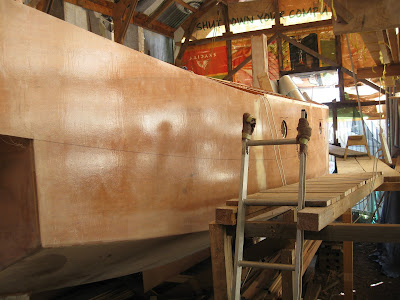 Some time ago I was standing and admiring the hull, all shiny in the sunshine coming through the sides of the shed.  All shiny.  'Hmm,' thought I, 'there's a hell of a lot of hull to sand.'  So it struck me that it might be a good idea to start getting rid of some of that shiny epoxy. 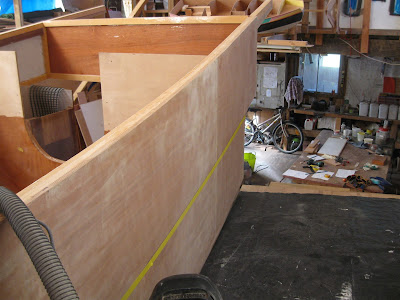 So now, first thing every morning, I get out the sander and vacuum cleaner and work along the hull for half an hour or so.  It will probably take a couple of months, picking away at it like this, but it has made an overwhelming task into a routine where I can plan my day.  And think about saloon tables. 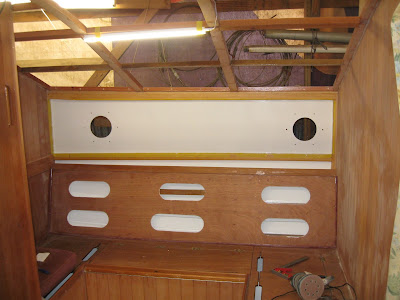 And before I install said table - assuming I ever get a pattern that will work, I have to finish off the saloon.  So I've started painting the 'cabin' sides. 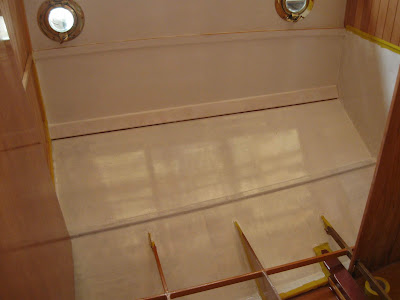 While I was at it, I sanded down in the galley area and started painting that out, too.  At least there is something to show for that work!

I am well aware of the fact that I am asking an inordinate amount of this 26 footer and can only thank David for giving me enough room to cater to pretty well all my whims!

Posted by Annie Hill at 3:51 pm No comments: