The Devil is in the Detail

I had been worrying about the rubbing strakes for a long time, knowing that I couldn't follow the good advice of boat building books, to mark them out and then stand back to check that they looked right.  I had lots of good advice offered me from the impossible 'glue them up first and then when you fit them they will make a fair curve', which isn't necessarily so, anyway, to 'use a laser'.  As so often has happened during this project, the best thing to do seemed to be to read around the subject, ponder for many a sleepless night and finally do what I had to do due to the various constraints I work with: such as my magnificent shed occasionally being far too small!!  I will just have to cross my fingers that the port side matches the starboard side and that any bumps and hollows won't be noticeable from a distance.
The other detail that had me a little concerned, being as how I've used up all my Coppercoat, was lining up the trim tabs so that their 'waterline' matched that of the rudders. 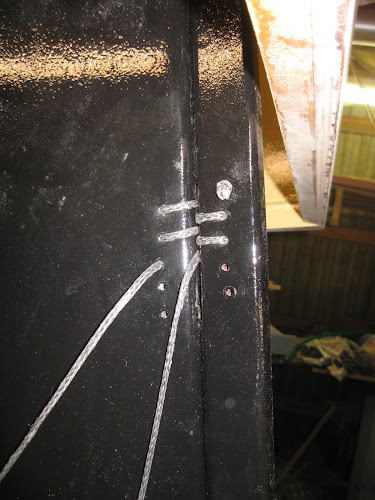 The issue here is that the weight of the trim tabs could result in a slight sag after the lashings were tightened and epoxy coated.  I had succeeded with the rudders and, am pleased to say, was equally successful with the trim tabs. 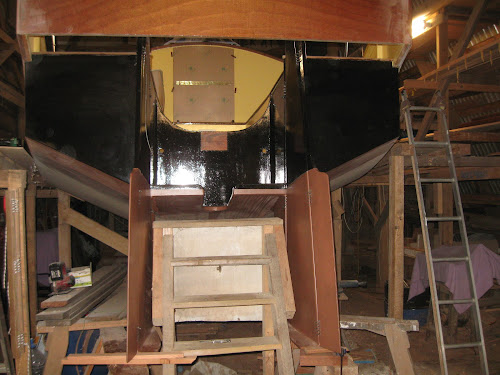 David told me that if I want to have trim tabs, I must be sure that they move very, very easily.  In fact I cannot imagine any other way of securing them that would have been so sensitive. 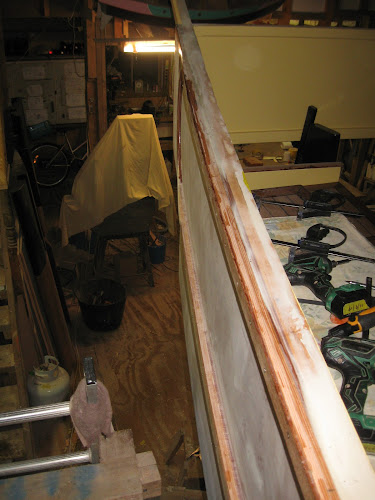 Because I didn't want the detail at the quarters - and the bows - to look too heavy, I decided to make them only 12mm thick and to taper the rubbing strakes into them.  This meant that each succeeding layer was slightly shorted than its predecessor, but getting the taper too look right to my eyes, took quite a lot of work. particularly at the bow where there is, in fact, a slight reverse curve. 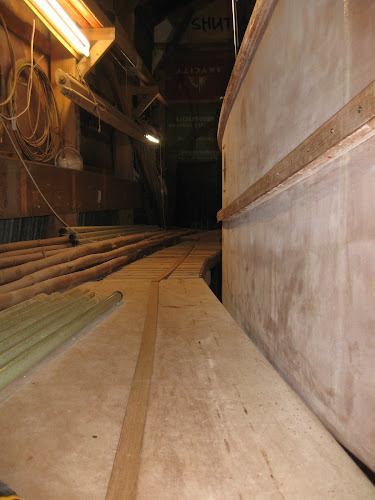 The final outer layer is of teak - left over from the decks.  Teak isn't a particularly hard wood, in truth, but is a delight to work and, besides, I still have quite a lot left.  Saligna apart, I have nearly run out of wood and the budget does not stretch to buying in more!  With some difficulty, I've made the decision not to varnish it, but to paint it as I have intended all along.  In New Zealand, most people put brass half round along the rubbing strake.  However, I don't plan to go alongside that often and I can't help feeling that if I inadvertently come into contact with one of these modern fibreglass boats, most of which have no rubbing strake at all, I will do far less damage to them with just wood.  The brass seems a bit antisocial, in all honesty. 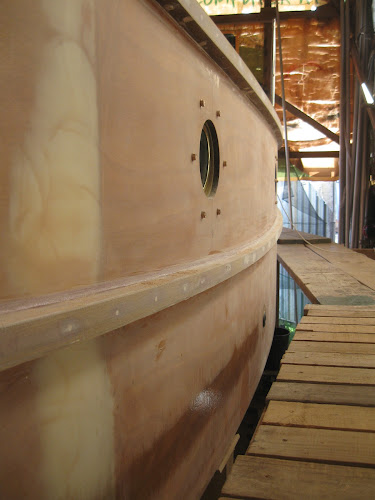 This is the starboard side.  In the same way that it's difficult for me to stand back and see what sort of job I am making of these rubbing strakes, it's also difficult for me to photograph them!  The underside looked more uneven than I was prepared to fill and fair, so I put teak there, too.  I have still spent an unconscionable time on my back scraping and sanding, to the detriment of my poor, abused elbow. 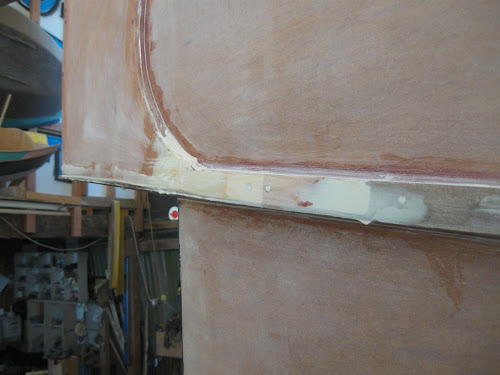 Here is the starboard quarter with all the fairing required to taper in the strake. 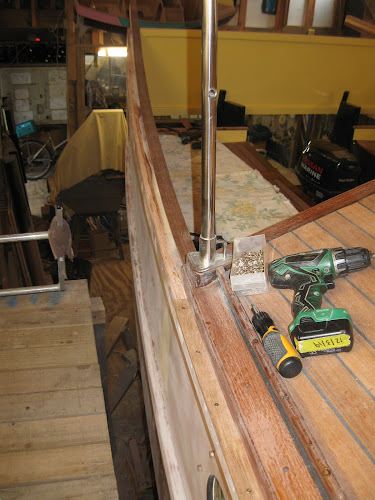 I decided that the top of the upper strake should be finished in varnished teak, which would tie the whole thing together.  Besides, it was also easier than trying to work out what colour of paint to put where! 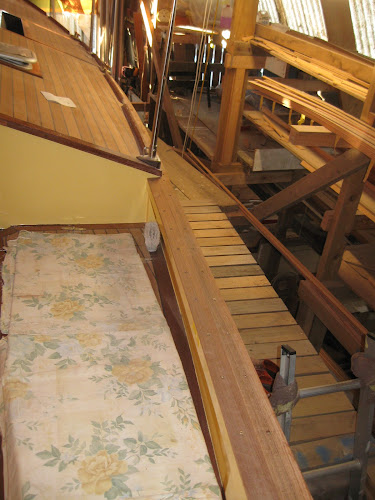 Again, I used my trusty decking, doubled to provide the width.  It would have been nice to have the correct size of timber; on the other hand, there is a huge satisfaction on scheming out ways of using what I have. 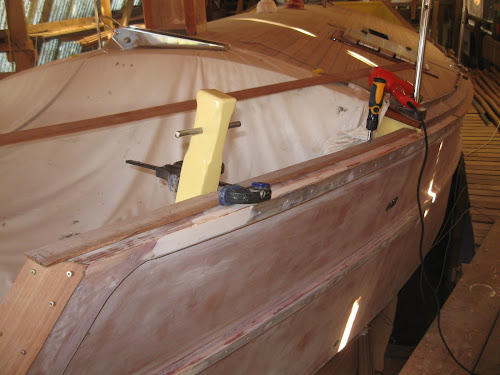 I really love my little junk's open bow.  It turned out much better than I had ever hoped, so I decided to show it off with some more teak.  I had about a metre of teak that was 100mm or so wide and I have been saving it for just this job. 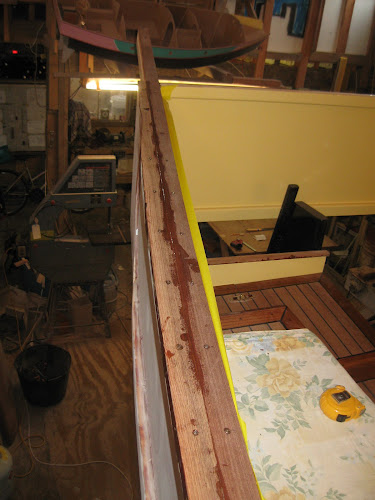 I put the wood in place using a heat gun to encourage it to bend, and then left it for several days to get the idea.  This made it a lot less difficult to glue into place, following as it does, curves in two planes.  The yellow masking tape formed a natural 'gutter' as I stuck it into place, which prevented dribbles from landing on the lockers below. 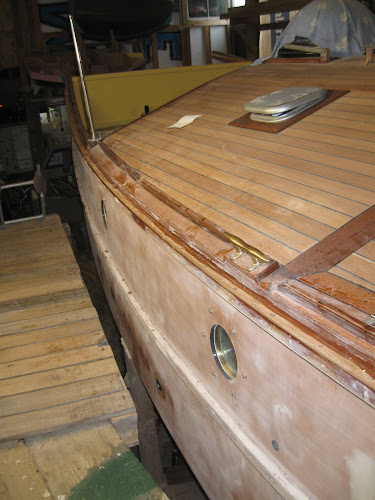 Looking aft to try and get some impression of what it will look like.  It's not exactly an informative photo.  It will be exciting actually to view the boat when she comes out of the shed.  Fingers crossed that the reality matches my imagination!
Posted by Annie Hill at 8:39 am 2 comments: