By the time Trevor had dismantled, repainted and re-mantled the forepeak and saloon, he was understandably ready for a break. ‛I think we should go and drive around Australia before it gets too hot,’ he suggested. What a splendid idea! We'd been planning to do this for years. I’d been saving up since Panama – and had started to doubt it would ever happen. Australia is an enormous country and although much of its coastline is worth visiting, the real Australia is the interior. Sure, most of its cities are along its shores, but they are not what Oz is about. Our preparations didn’t take very long. We bought a cheap four-person tent, some interlocking, closed-cell foam mats to use as a ‛footprint’, several large plastic boxes for clothes, food and cooking equipment, dug out our propane cooker we use when tramping, sleeping bags, etc and loaded up the car. We went by way of Beelbi Creek, where Brendan and Caroline live, to pick up some things we had temporarily stowed there and Caroline persuaded me to leave behind our sleeping mats in favour of real Oz swags. One of these belonged to Trevor, anyway, and he looked at it with such nostalgic affection, that I felt that I’d better take her advice and do the job properly. For those who have never come across a real swag, they are an arrangement that make a lot of sense in that dry country. Their basis is a piece of proofed canvas a little over twice the width of a sleeping bag. On the bottom are sewn a couple of pockets at each end and these hold the closed-cell foam mattress in place. You can then tuck a couple of sheets and a blanket or two round the mattress – or put a sleeping bag on it – and put your pillow in place. Around the bottom and up one side of the mattress is sewn a zip and this fastens the whole thing up into a sort of super sleeping bag, but with an extension on top, which can be put over your head to keep off the dew or – on rare occasions – the rain. In the morning, you climb out, zip up the whole thing, roll it up and secure it with straps sewn onto the outside. The canvas keeps it clean, you can sit on it, but when you are ready turn in, you simply undo the straps and instantly you have your bed, ready to use. In dry conditions this effectively obviates the need for a tent, but we usually used at least the ‛inside’ of ours, because the floor enabled us to put our clothes down without their getting dusty and kept out unwanted visitors such as snakes. The screen kept out biting insects, of which Australia has a large and varied population. The swag also provides a comfortable seat on which to sit while cooking and eating. Caroline – as usual – had given sound advice.

Travelling around Oz in GEG was often like cruising in Iron Bark. GEG was not into speed, but would doggedly continue when many a more flash and expensive vehicle would have given up the ghost. She had no luxuries, but was essentially comfortable. She was strongly built and simple (apart from her electronic fuel ignition, about which more later). She was neither new nor fashionable, and throughout the whole 20,000 km trip, we would meet people who said, ‛You’re surely not driving around Australia in that?’. (We didn't have extra-wheels, or extra-wide tyres. Nor did we have a snorkel, roof rack or any other of the accoutrements that real four-wheel drive vehicles had. Even the spotlights fell off after the first bit of real dirt road!) However, after she had towed her third vehicle in half an hour, out of a veritable sandpit, one of the rescuees stated, ‛Now that’s a real car,’ 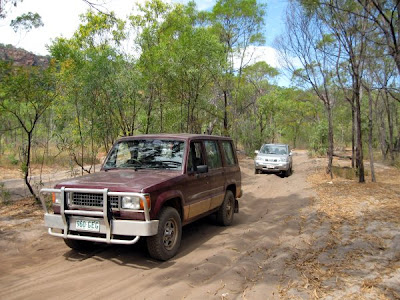 and indeed, she seemed to required little more than petrol and the occasional top-up of oil and water. Cheap and reliable – like the ideal cruising boat. ‛Driving off the bitumen’ also resembles sea cruising. You give passing vehicles a friendly wave. You start fretting about where to spend the night a couple of hours before sundown and occasionally end up in less than ideal surroundings – gravel pits in this way of life – 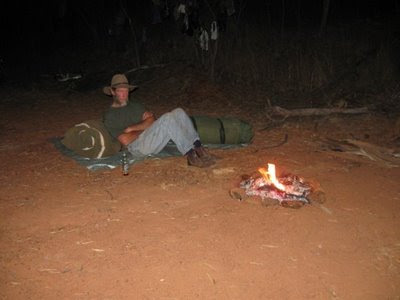 rolly anchorages in the other. You try to avoid expensive marinas, a.k.a caravan parks, and seek out a free and secluded berth at night. Time was, when cruising in Scotland, that you could go into an hotel and request a shower: while land cruising in Oz, we did this at roadhouses, and often the hot shower was free or paid for by a ‛gold coin’ donation ($1 or $2) to the Flying Doctor. Believe me – hot and dusty needs a good shower as much as cold and salty. When roadhouses didn't oblige - or after a particularly dusty day, we did as we do aboard and used a ‛Sunshower’ to sluice ourselves off. 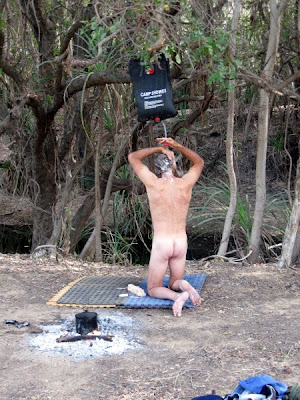 And like real cruising, we had to provision for several days without refrigeration, 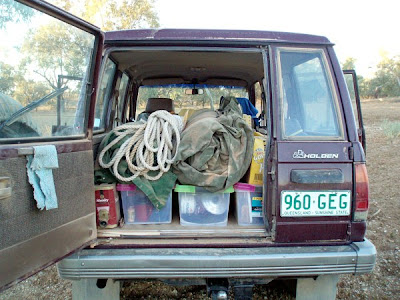 hunt out laundrettes, watch our water consumption and look out for weather – some of the dirt roads that we travelled would be completely impassable after only a few mm of rain. 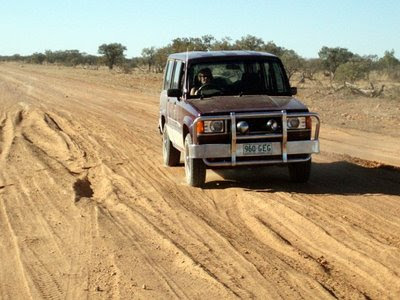 Of course, there were a lot of differences, too. It's an incredibly expensive way to travel – we spent more on fuel in 8 weeks than we would spend in 8 years, sailing, although, to be fair, we were travelling between the end of June and the end of September 2008, when the cost of petrol was at and all time high! We covered vast distances at great speed, so that while we saw a lot of the country, it was more like a series of snapshots than a detailed appreciation. On the other hand, if we felt tired of driving, we could stop – we didn’t have to wait until we found a safe haven to drop the hook. Overall, it was a wonderful thing to do once, but unlike cruising under sail, there was not much of a sense of achievement. It was partly for this reason, that driving on the dirt roads is so satisfying – at least there is some challenge to it. The most mundane day sail is positively exacting compared with driving along a well-made, hard-top road – especially in Oz where there is so little traffic. We left on 22nd June and set of NW into the heart of Queensland. Away from the coastline and along the Divide, we encountered well-wooded country and rolling scenery, but soon we were into a much flatter landscape. Horizons are often a long way off in Oz; roads run on to vanishing point, 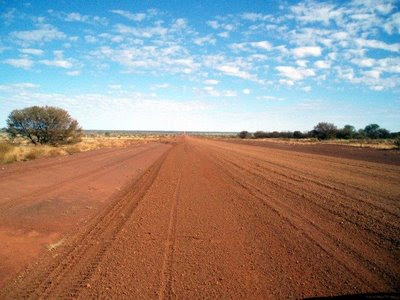 and I found it difficult to believe that what looked like desert to me, was in fact cattle country – as Trevor described it: ‛a rabbit would take a cut lunch to cross one of these paddocks’. 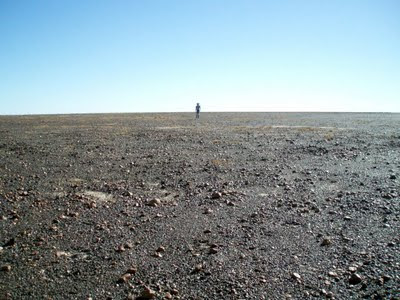 The real desert was covered in vegetation – scrub that can tolerate minuscule rainfall and fierce, unremitting sunshine. 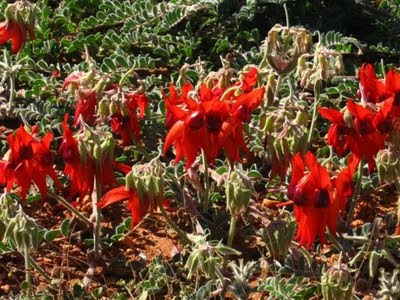 It was also difficult to come to terms with the sheer size of the place – after driving for a week, averaging about 420 km a day, we were still in Queensland! In the farming areas, the roads went through small towns – often little more than what would be regarded as a hamlet in England – that served a community that covered many square kilometres.