To those who aren't used to boats, it might seem odd to the point of unpleasant, that when two or more boat owners get together, sooner or later they start talking about toilets.  But one of the big differences between living on a boat and living in a house, is that on a boat, you are far more closely concerned with the day-to-day realities that most people ashore completely ignore.  For them it's a case of turn on a tap and out comes water: another tap produces hot water!  You pull a plug and the water vanishes.  You flush a toilet and suddenly it is filled with clean water.  On a boat, however, none of this happens automatically.  Those of us who like to keep things simple manually pump water from a tank; heat it in a kettle; possibly pump it out of the sink and as for the toilet ...

For many years the norm has been to have a marine toilet that used seawater to flush out the contents of the bowl directly over the side.  There is no real objection to this: your e.coli apparently isn't that fond of salt water and doesn't last long.  Most sailors have experienced the sight of a shoal of fish rushing to the outlet and busily feeding, so you are obviously not disposing of noxious waste.  However, where you have a lot of boats gathered together there are reasons to worry about this arrangement.  For a start many marinas and inner harbours have a lot of fresh water coming into them.  This often floats over the salt water and is a fine place for you e.coli to breed.  If there is little or no flow of water, all the stuff pumped out will sink to the bottom of the harbour and there will probably be too much of it for the local flora and fauna to deal with.  In addition, if you are anchored in a popular spot, you don't want to pump out your toilet in an area where people are swimming.  The way round this is a holding tank, which you empty at a dedicated place in a marina or yacht harbour, or which you take out to sea and empty away from beaches, anchorages etc.

But sea toilets themselves are not without their issues.  In order for them to work effectively, they need to be able to pump in plenty of sea water, but all too often these pumps leak.  Not a lot, but a little water in an otherwise dry boat goes a long way, and the salt means that it's always damp in the area.  In addition, there are often valves to turn on and off, which non-sailors find disconcerting to downright worrying.  The most effective of the marine toilets I've dealt with is the Lavac, which only requires one to shut the lid and then pump, following simple instructions displayed on the bulkhead.  But even this paragon requires that you have two holes through the boat in order for it to work.  I happen to have a prejudice about holes under the waterline.  They have to be protected by a skin fitting that allows you to seal off the hole should the pipe leading to them fracture for some reason.  In theory, this could happen at any time and ideally one would shut all these sea-cocks off every time one leaves the boat.  Most people don't of course, because they fail very rarely.  But I know of more than one boat that has been lost because something failed between the hole and whatever the pipe led to.  In an ideal world, I wouldn't have holes under the waterline.

One can live with these niggles and worries, and most boats are bought with a sea toilet already fitted and the owners live with them.  When I bought Fantail she had a standard marine toilet, and a very indifferent holding tank.  One of my first jobs was to replace this with something a bit better and by and large things were OK.  However, the pump always dribbled sea water with the result that black mould would start growing the moment I turned my back.  I was getting increasingly irritated with this, but what finally destroyed any empathy I had for this system, was as a result from my moving from the cold waters of Tasman Bay to the warm waters of Northland.  Apparently the long, dark, inlet pipe was an ideal environment for something (I'm not sure what) to grow very happily.  But whatever it was, it liked a certain level of salt water, no more and no less, so when I stayed in a river for a while, it would grow and flourish, only to die when I went back to sea.  Then its salt water equivalent would grow and flourish only to die when I went back into a river.  How do I know?  Because each time I changed my environment, a couple of days later, the water coming into the heads would stink of sulphur and this appalling stench would last for a day or so, until all the dead matter was flushed through.  I got to the stage of dreading the change in water salinity.

I used to live with a Porta Potti, but they are heavy when full, and I didn't really relish the thought of struggling with one through the very narrow passageway into my heads compartment.  I decided to try out a composting toilet: a lot of friends have them and all spoke very positively about them.  I thought of making one, but realised that they need to be quite carefully set up for the female anatomy and I didn't really want to make one only to find it didn't quite work.  So in the end, I cashed in my savings and bought a C-Head.  These are made on a one-off basis by a chap called Sandy Graves in Florida.  It's not strictly correct to call them composting toilets: they are in fact, desiccators and to that end solids and liquids are separated. 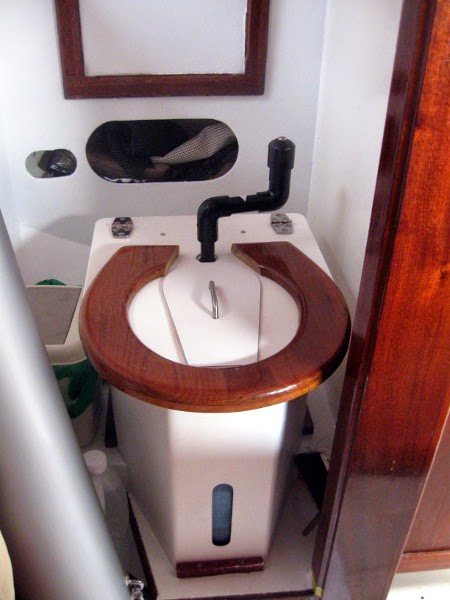 Sandy has a variety of shapes and sizes and after we'd emailed back and forth, I decided which I wanted and it duly arrived.  It took me a while to get used to it: the dried coir bricks had to be reconstituted with water, and ended up too wet to do their job properly.  I then tried wood shavings, but found that the hardwood didn't do a very good job of absorbing moisture either.  I was seriously contemplating installing a fan to assist, although this was something I very much wished to avoid.  However, a bag of softwood shavings worked like a charm and instead of adding more medium almost every time I used the toilet, I found it stayed dry for ages.  Now that I have found the ideal medium, I am delighted with my 'composting' heads.  It is easy to empty out at sea; alternatively, you can put the solid waste into a stout bin liner, pour over half a cup of bleach and dump it ashore.  I much prefer to wait until I'm outside the 'no dumping' limits.  The website has several different ideas as to what you can use for a medium: I guess it's essentially trial and error until you find what works for you. The bottle can simply be emptied over the side, rinsed out and put back in place.

So that's two fewer holes under my boat; a toilet compartment that is easy to keep nice and clean and no smell.  I can only recommend this as a much better alternative to a conventional marine toilet.
Posted by Annie Hill at 6:38 pm

An interesting and informative post about an important issue. I have a small holding tank which works for me for weekend and holiday sailing which is sufficient for the time being. All the toilets I have had have had their problems. The best was a Lavac that used vacuum pressure to work but the bowl was plastic covered aluminium which corroded apart.
All my through hull fittings are are plastic and about 35 years old - no problems ever and NO corrosion problems.

The best toilet I had was a Lavac which you pumped and pressured up the bowl (sealing toilet lid!). The trouble was that the bowl was plastic encased aluminium. In a few years the plastic and the aluminium parted company and I had to throw the whole lot out. I then fitted some Swedish? brand that leaks a bit and a holding tank - what a nightmare.
When I did a trip up to the islands years ago we just used to sit with our backsides over the pushpit at the stern - an excellent and much ventilated system.

The Lavac I had came with a porcelain bowl and I think that is the only type they sell these days. But at the end of the day, your comments simply prove that once again KISS is the way to go.

You so do sound like Yourself! :D
Alive, witty and substantial - a true enrichment, to say it briefly.
BTW, also I share Your dislike of holes under the waterline, and got into the concept of separating wet/dry of our leftovers. As it is a drama to be shitting into pure drinking water in most "civilized" countries..
But the artistic (and merchandise) side of me would desire an email-contact with You.
If You find a spare minute, I actually would e very glad if You drop me a line at
rudy.lovepirates@facebook.com

Thank You in advance,
and always glad to read anything from You,
:) Rudy

Thanks for your comment - and I agree with you entirely about the madness of using vast resources to ensure that our water is fit to drink and then promptly polluting it so badly that we can barely deal with it.

I don't do Facebook and never will, so if you want to contact me, write to voyagingannie@gmail.com

How often must it be emptied? I'm told some composting heads are emptied once a month (two people full time) and others once a week (ugh!)

James, there is no unpleasantness at all when emptying a composting head that is being used correctly. The waste is perfectly dry and normally the container doesn't even need rinsing. Different composting toilets have different capacities. The smallest C-head would probably need to be emptied once a week with two people on board.