My apologies for not having blogged for a while, but Christmas, New Year and Tall Ships can all take their share of the blame.  And I did try to have a bit of a holiday in the holiday season!

Our Tall Ships junket must have been the longest ever, starting well before the Tall Ships Regatta and, indeed, I believe that there are still junkies up there, sailing in company and socialising even as I write.  My own effort to join in was looking to be a disaster, when the car that I share broke down the day before.  A severe gale came along later in the day to give me a sleepless night, as I battened down the shed and then was kept awake by its shuddering through the night.  The Friday before Tall Ships dawned blowy and wet, but I caught a bus up to Opua, persuaded my kind friend, John, to collect me from the car ferry and arrived to find that conditions had moderated sufficiently for me to get out to Zebedee, where I had been offered a berth for the night.  He was the only boat I had the slightest chance of boarding, being in a more sheltered spot than most of the fleet!  Conditions moderated sufficiently for us to be joined by several other boats and the mandatory pre-Tall Ships Race dinner was enjoyed by all who managed to make it. 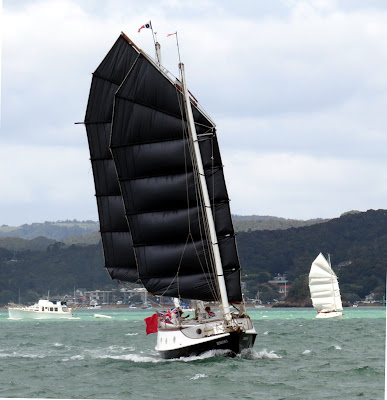 The next day dawned bright, but breezy and I have to say I was less than enthusiastic about sailing around with a large group of other boats.  it may be a 'friendly' race, but people do get competitive ...

Roger Scott took some great photos and here is one of Zebedee and Blondie storming along before the start line. 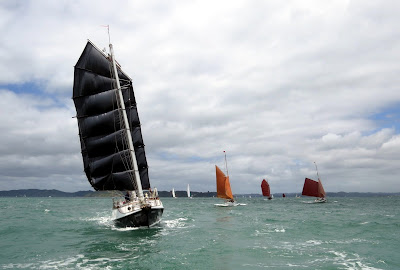 We made a bad start, largely due to the fact that neither skipper Alan, nor helmsman, Annie, had bothered to pay a lot of attention to the instructions.  I reckoned my job was to point the boat as directed so lay the blame squarely on Alan's shoulders.  Our sole crew member was too busy watching the other boats to get involved until Alan asked her: "Just which beacon are we supposed to use?"  Hmm, we'd chosen the wrong one.  However, Zebedee took off in hot pursuit of the fleet and we slowly overhauled every single junk, bar Tystie (and we even got ahead of her for a while) leaving Alan ecstatic and me exhausted.  Zebedee is a bit of a brute, close-hauled in gusty conditions and insists that his mainsheet be eased before he will bear away in a gust, so that was Alan's job.  At one point it felt extremely hairy, with boats all round, rocks not far to windward, me desperately trying to leave boats enough room to windward and those to leeward desperately trying to get past us and clear.  Not really my cup to tea, I have to confess.

However, in due course, we were in less crowded conditions, and by watching another couple of canny boats ahead of us, I managed to avoid getting becalmed in the lee of Roberton Island.  That's when we overtook Tystie.  A tacking duel followed, in which we went faster and higher that she did on port, only to lose it all again on starboard.  Sadly for Alan, there was a lot more sailing on starboard than on port, but we still felt that Zebedee had done really well for himself. 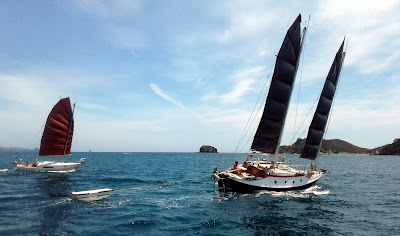 I stayed on for another day of socialising, while the rest of the junkies carried on having a perfectly wonderful time.  I gather there has been much sailing in company, visiting back and forth and blather about all things junk.  This is another of Roger's great photos of Zebedee sailing alongside Fantail, showing off the new sail that Bryan has made. 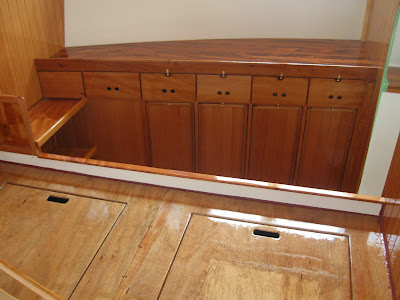 Anyway, enough of fun and frivolity.  Back to the hard grind.  Just before Christmas, I finished varnishing the forecabin.  I confess to feeling very pleased with it! 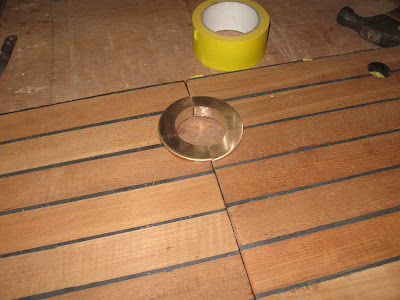 You may recall that back in the dim and distant past, I put the deck on, and anchor lockers in the foredeck.  Belatedly it occurred to me that the chain locker would hold chain and that the anchor would be on the bow and that the two would be connected.  Therefore, it might be a good idea if the chain could come out of the locker without the hatch needing to be open.  After pondering for a while on how to protect the woodwork, I went to Stanley's and bought a second-hand skin fitting for $5 and cut it in half.  It should do the job nicely. 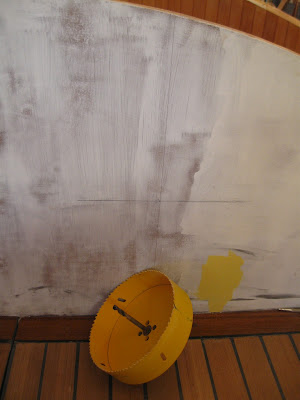 One of the jobs that I've been frankly terrified of doing, is cutting holes for the portholes.  If I put them in the wrong place, there would be no going back.

I had found a hole saw, the correct size for the cut-out (which struck me as a lucky break), but had also been put off by the dire warnings of the thing getting out of control while I was trying to saw the hole out.  Big, heavy powerful drills can be a handful for most men and can certainly do a lot of damage in my hands.  However, it had to be done, so I borrowed a more powerful battery drill than the one I own and set to.  Apart from taking a long time (I used the slow setting), it was pretty painless. 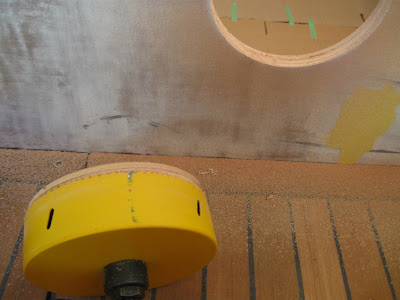 And the result was most satisfactory. 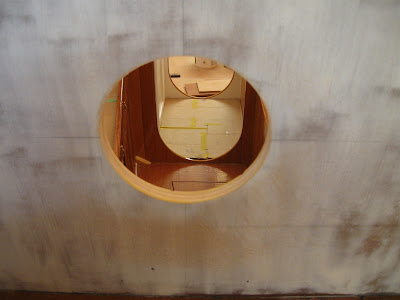 This is what it looks like from on deck ... 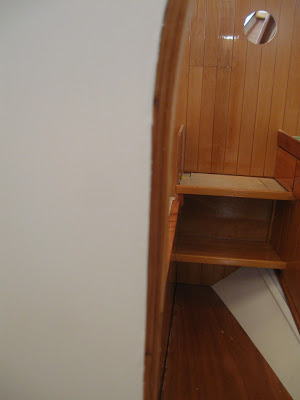 And this is the view from below.  A red letter day, for me. 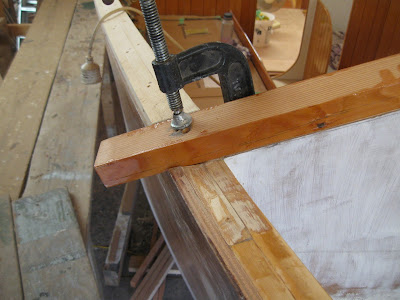 Another job that has been daunting me is fitting the deck beams.  This is another of those jobs that just has to be done correctly, otherwise I'll end up with an undulating deck.  Unfortunately for me, joinery is required in order for the beams to notch into the sheer clamp.  However, one of the things that I've learnt is that if I take something sufficiently slowly and carefully (one reason why this boat is taking so long) I can usually figure out how to get to where I want to. 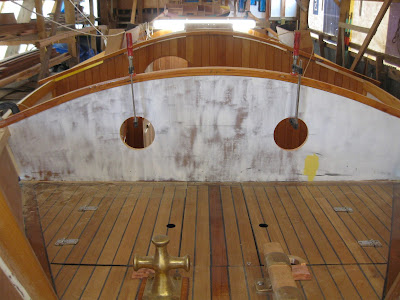 I marked the bulkhead, planed and then sanded it to match the beam (sending up prayers of thanks to whoever it was who invented gap-filling epoxy, which turns this bodger into a builder) and little by little got the beam, bulkhead, and sheer clamp to match. 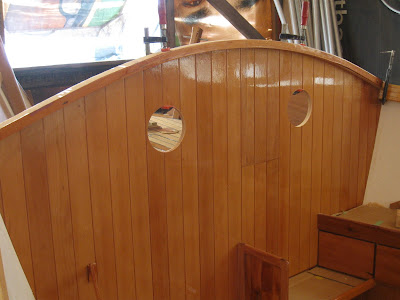 That done 'all' that remained was to glue it into place, with the assistance of clamps and temporary screws. 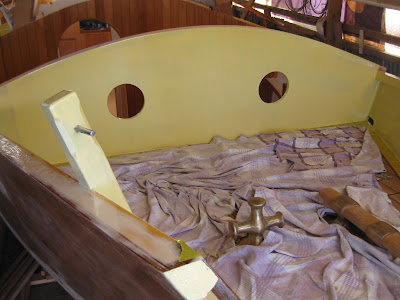 Ah yes - I forgot to say that the reason I finally fit one of the deckbeams, was because I wanted to finish off the foredeck (apart from the bulwark capping) and couldn't do that unless the deck beam had been put in place.  With everything masked off, and after preparing the remaining deck box for painting, I set to. 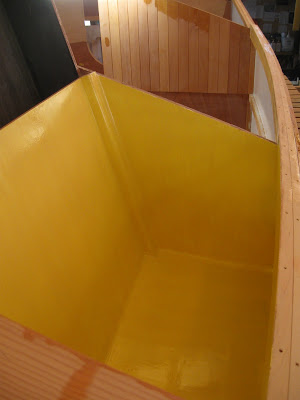 The first coat was applied with a brush, but when SibLim Club member, Phil, asked why I wasn't using a roller I decided to give it a go.  I'm not the best with these things, but have to say it went on quite nicely.  'But it takes a lot more paint than putting it on by brush,' I pointed out. ' Isn't that the idea?' he asked me.  Duh. 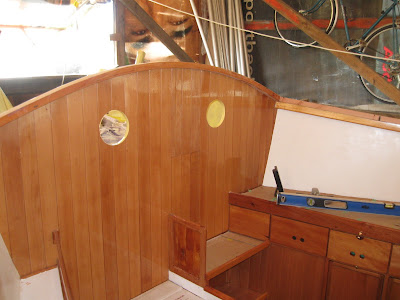 While the paint dried, and with the bit in my teeth insofar as deckbeams are concerned, I added an extra batten of wood on the inside of the sheer clamps. 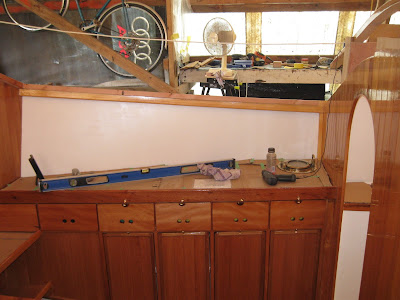 These provide a landing for the inner deck liner, which ends up creating a stiffer deck. 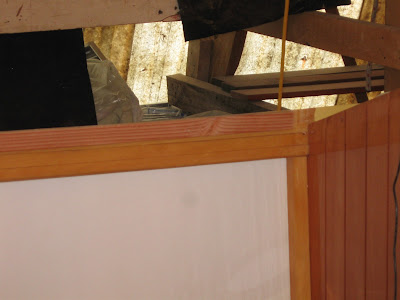 More framing will be required between the deckbeams and the stringers so the deck is supported and the deck liner has something to glue to.  Fitting that should be an interesting exercise ... 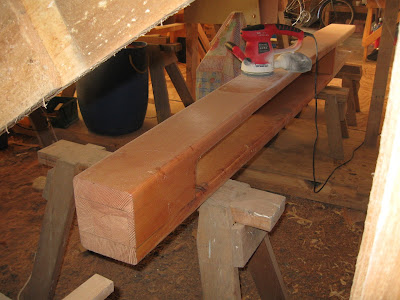 Part of fitting the deck beams involves fitting the tabernacle.  Or the other way round if you prefer.  It will be a lot easier to sand and varnish it while it's horizontal than when it's in place.  Another job that can be carried out while paint hardens off. 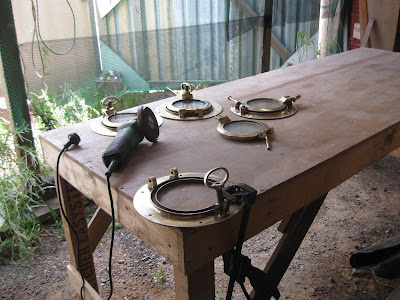 And while I'm at it, I need to decide what porthole goes where.  The glass is badly scratched in some of them, so I don't want those right next to my face when I'm sitting up in my bunk or in the saloon.  I may as well finish cleaning all of them up while I'm at it. 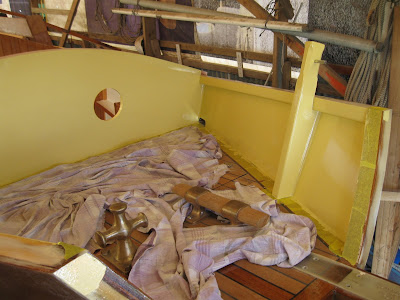 And here is the foredeck, with the final coat of paint applied.  Once it has cured a bit, I'll sand both it and the varnish down and apply clear finish over the lot.  This makes scrapes easier to repair, if they're not too deep and effectively seals the edge where paint and varnish meet.  When it all starts to look a bit scruffy, all that is required is to coat the lot with a couple of coats of clear polyurethane.  When this boat is launched, I hope to keep maintenance to a minimum!

Great! Annie Hill is still writing! I greatly enjoyed your tales of the building and voyages of Badger, and I'm delighted to discover your blog. You inspired my own building and sailing, though I've never been as creative and bold as you. The new boat looks absolutely great - the combination of straightforward materials and simple shapes works supremely well - she looks a tough, seaworthy boat, well able to carry you as far as you wish. Happy sailing to you! Regards, Martin