The bulk of the galley completed.


I'm sorry that I haven't posted for so long.  I went away to Nelson for a week and it took me two weeks to catch up on all the things I neglected to do in Nelson.  (I'd gone with good intentions of sitting at my computer, writing emails, doing tasks that I had neglected as Chair of the JRA, editing articles for the magazine.  Instead, I chatted with my friends, loafed in the sun, pottered around and did a lot of reading.)

I came back full of energy and good intentions, but although I have certainly been putting in the hours, life and hordes of visitors have slowed down progress.  However, I love seeing my friends and if it means that boat is launched a few weeks later than would otherwise be the case, well so be it.  But there are many times when I wish either that there were a few more hours in the day, or that I didn't need to spend quite so much time in bed! 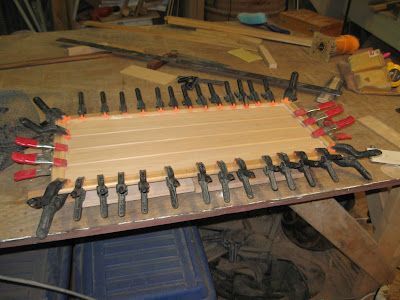 The next- indeed, tigerwood apart, the final - big job in the galley was making and fitting all the doors.  My technique, now, is to use Gorilla polyurethane glue for the initial glue up, and then let the epoxy coating finish the job.  This allows me to put the doors together more quickly and with less mess, one at a time. 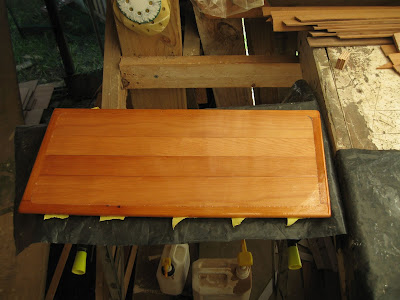 Any gaps where the panelling meets the frame are filled with neat epoxy, which also percolates between the plank edges.  The result is a very stiff, very light and very attractive door.  I should like to take credit for this wonderful concept, but in truth, they are exactly the same as the doors we fitted to Badger and China Moon.  The only difference is that this time I'm allowed to make the frame, as well as fit the panels! 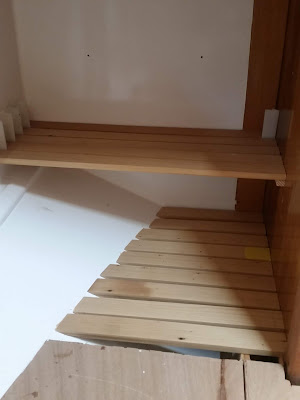 I fitted the slats for the vegetable locker, which, I hope,will help keep it dry. 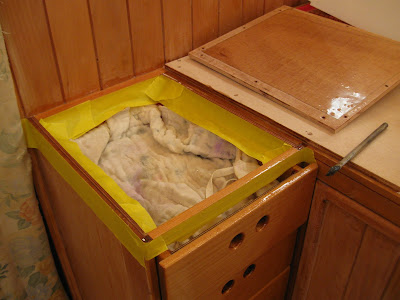 And remembered that the end of the counter still had to be cut and fitted.  So that was duly done and glued down over the cutlery drawer. 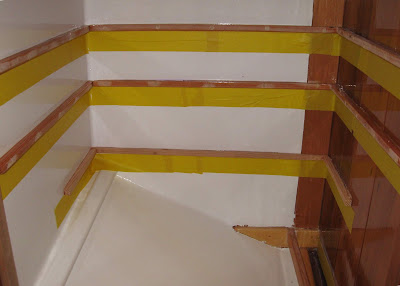 The shelves being painted and the slats being coated, finally everything could be glued into place. 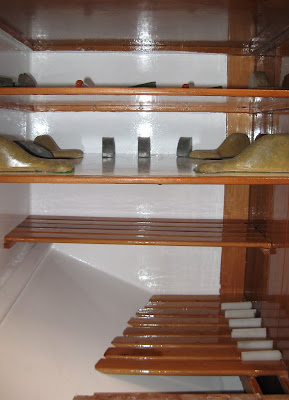 One of the very good things about epoxy is that it doesn't require any pressure to set.  The little lead weights were quite sufficient to ensure a good joint.  The slats simply required pushing into place - and at the last moment I remembered not to glue in the final one, so that I could get my hand underneath for cleaning. 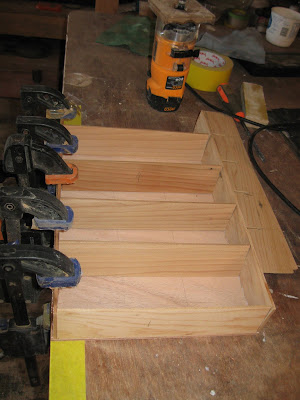 I made up a tray for the second shelf down.  This is to hold my glasses, some of which are Waterford crystal, bought for 5 bucks each from the market.  Well, why not? 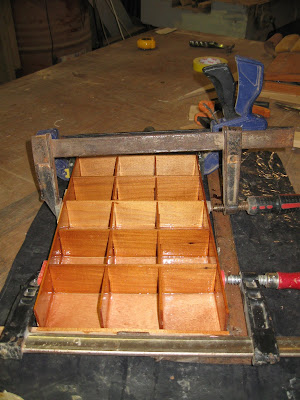 This was made in exactly the same way as the shelf fiddles and, once again, I relied on the coating epoxy to finish off the gluing job.  It is surprisingly robust, considering how flimsy the materials are. 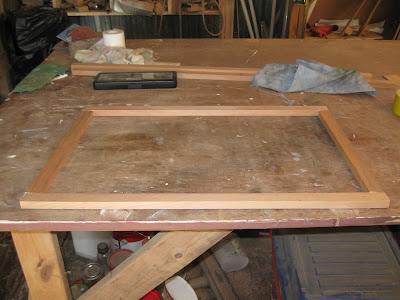 Four more doors yet to make, so I set up a sort of production line.  This is the one from the veg locker. 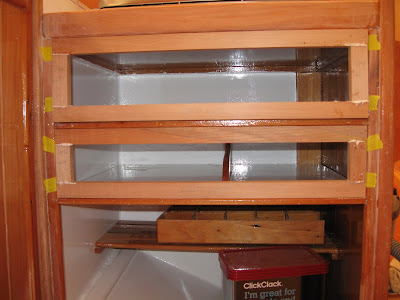 And these are the frames for the lockers under the cooker.  Made in this fashion, I can be sure that they will fit.  I wouldn't trust my measurements to make them 'on the bench'. 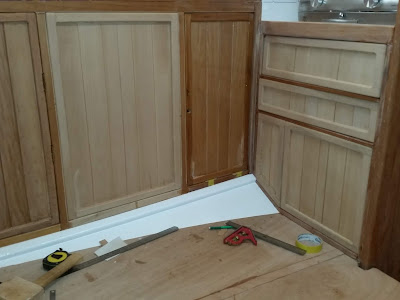 I dry fitted them into place before coating them and then facing the agony of fitting the hinges. 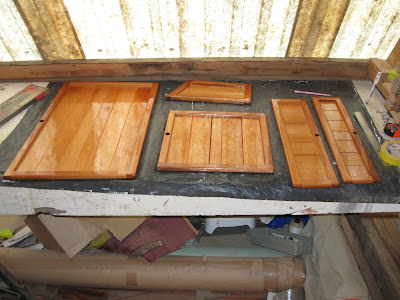 The 'door' at the back is actually going to be fixed in place. 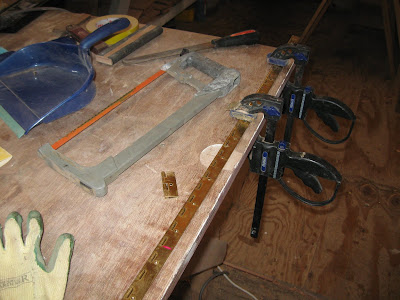 The only thing more heart-stoppingly expensive than barrel bolts, are hinges.  Some time ago I bought a length of brass piano hinge and I used this to make the hinges for the cabinet.  (This was Paul Marine's brilliant idea!) 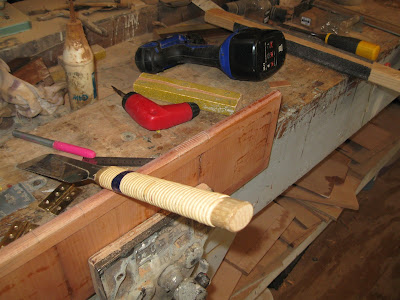 Cutting the rebates on the door was the easier of the two to cut, but I find it very difficult judging the correct depth.  My perusal of You Tube didn't help much (what's 1/32 of an inch in real measurements, for heaven's sake?)  For a start, they all assumed that I'd had the sense to plan the hinges before I assembled the cabinets.  Yeah right. 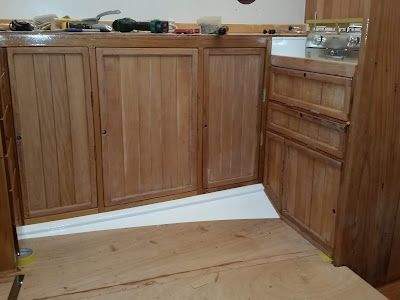 And then, due to a distraction, I drilled the finger hole on the wrong side of the aftermost (right hand) door, which meant that the hinge had to be fitted on a piece of wood that extended beyond the door.  I won't tell you how long it took me to get from the coated doors, to this stage, where they are sanded and fitted. 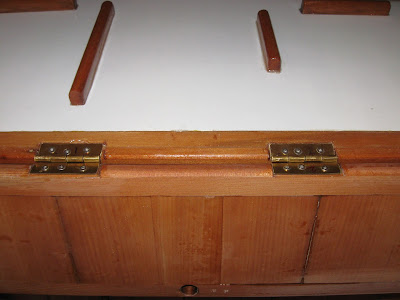 But then, they all had to come off again so that the rebates could be coated.  I debated this, but some of the screw holes had been refilled with so many slivers of wood, that the doors and frames looked as though they'd been attacked by woodworm.  I lived to regret it: another distraction caused me to fit a couple of hinges to the wrong frames (having carefully set them down so that they went back where they came from.)  Because the hinges are individually made - 'crafted', I should say!- they were all slightly different.  But not different enough to be noticeable until I tried to shut the door.  It took all day to put the never-sufficiently-to-be-cursed hinges on the correct rebates. 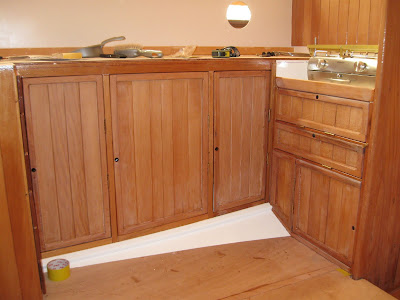 However, the final result is rather splendid don't you think?

So now, I have a bit of trim and a spice rack to make, the portholes to install and I need to machine up a heap of tigerwood for the galley counter, the cabin sole and the saloon table.  Then I can fit the deckliner and call the accommodation finished.

I had been hoping to complete it by the end of they year.  Ah well, nothing wrong with hoping.
Posted by Annie Hill at 12:33 pm