Drying out wasn’t going to happen, so we decided instead, to go across and see some friends in St Peters. Their bush telegraph was obviously working, because as we tied up at the waiting jetty, they were there to greet us. 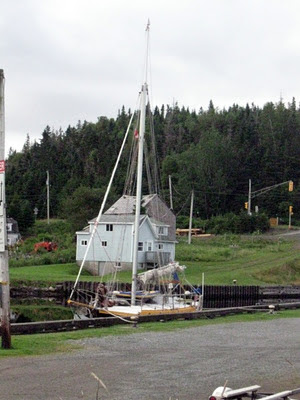 We had a pleasant time catching up later that evening. I had long been wanting to meet a couple who have a junk schooner, Easy Go, that they built to the same design as Badger, so I was delighted when I discovered that Greg not only knew them, but knew them well enough to invite them over for dinner the following day.


After a wonderful evening, we all went back on to Iron Bark for nightcaps, still talking nineteen to the dozen, with so much in common and so much that we wanted to learn about each other. Bob and Kathy were leaving to see their son in Newfoundland in a couple of days, but we just had time to make arrangements to go and see them – and the boat! - before they left.

St Peters, I should explain, is at the entrance to the Bras D’Or Lakes, a remarkable geological formation that is an essential part of Cape Breton’s character. The island of Cape Breton was almost split into two by the formation of two bodies of water – going back to the days of the great glaciers, which form a large part of the area of this island. (Although a causeway was built over half a century ago, to join Cape Breton to the ‘mainland’ of Nova Scotia, it is, by Nature’s purpose, an island.) These two lakes are themselves almost separated by a ‘Narrows’ at Barra, that was long ago exploited by building two bridges – one for road and one for rail. They are still brackish, although almost fresh, and so have a unique ecosystem. The major appeal of the Bras D’Or for most people – particularly Nova Scotians and particularly sailors – is that being inland, they rarely encounter the prevailing summer fogs that bedevil the rest of the province.

The canal itself is no great feat of engineering if compared with some of the European creations, but is interesting and – better still – staffed by some of the most pleasant people one could ever hope to meet. It is always a pleasure to go through and, as a sailor who isn’t particularly fond of motor cars, there is an additional delight in seeing the bridge swing open and make all the traffic wait as one makes one’s stately way through. 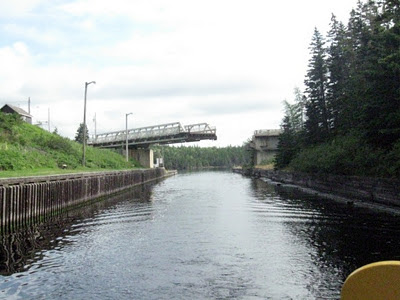 We sailed into the River Bourgeois on a grey day. Considering that Bob and Kathy have now made it their home and that for a long time, it has been the summer retreat of the renowned writer Farley Mowat, it is perhaps a rather inappropriately-named spot – in the sense that most of us use the word ‘bourgeois’.

We anchored close to Easy Go 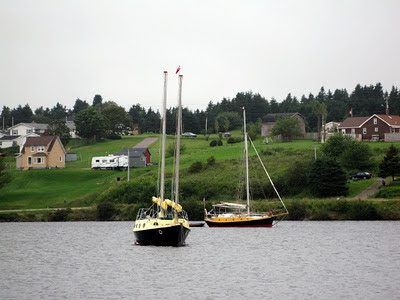 and before we had worked out where the house that Bob and Kathy were building was located, we saw them dragging a dinghy down the beach and rowing out to meet us. We went over to see the boat and were made very welcome. Easy Go was built – incredibly - in 11 months, but while she is undoubtedly very simple, there is no feeling of a project that was rushed or in any way executed less than thoroughly. It did my heart proud to see her – she had Badger’s spirit strongly within her and Bob and Kathy would leave me standing in their economic efficiency and their ability to enjoy all the good things in life. It was good to see that a lot of the things that I think worked particularly well in Badger – such as the unusual companionway, had been both copied and kept.

Later, we went ashore to see their latest project – the cutest little house – whose 350 sq ft will contain all that anyone would really ever need. We stayed for the evening and I was very sorry that they were leaving on the next day and that I wouldn’t get the chance to spend more time with them.

We left the next morning and Bob and Kathy came down to the entrance to the river, where they took some brilliant photos of our sailing out. 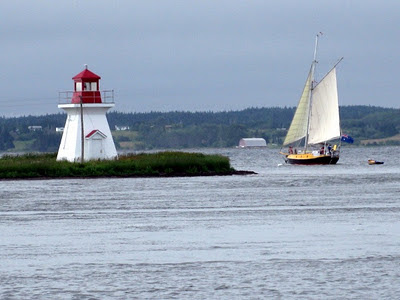