We woke up to a perfect, if perfectly calm, morning. We left straight after breakfast, drifting out of the anchor and leisurely making sail.

The ‘other part’ of the St Andrews Passage, which I had also always wanted to transit, was the Canso Strait, taking you between Canso I and the mainland, where the town is located. En route to the passage that goes past the town itself, we passed the Canso Light sitting on its wee island, which looks as though it might get washed away in the next severe gale! 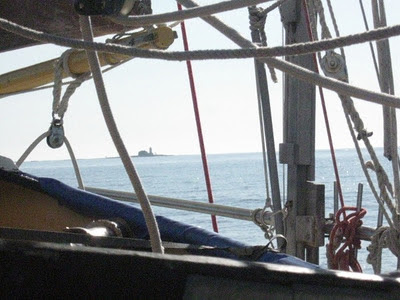 As you turn the corner, the town is completely dominated by a huge church, and this continued to be the case as long as we had the town in view. The leading marks are, in true Nova Scotian style, well maintained and attractively designed and executed. I often wonder why, now that we have so many aids to our creativity, we can so rarely create something that is both functional and attractive. Indeed, creating something aesthetically pleasing seems to be an impossible challenge for most designers these days. 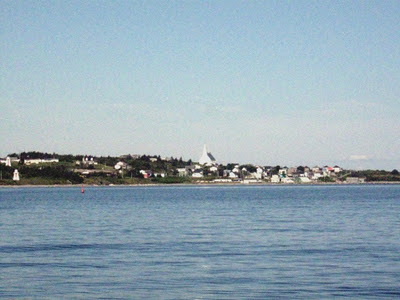 The passage was very pretty and the town looking most appealing under a sunny sky, bordered as it was by a calm sea. But I couldn’t help thinking that it’s probably a bit bleak in the winter. From all angles, the church was the town and I wondered how much influence, for good or otherwise, this institution has on Canso. 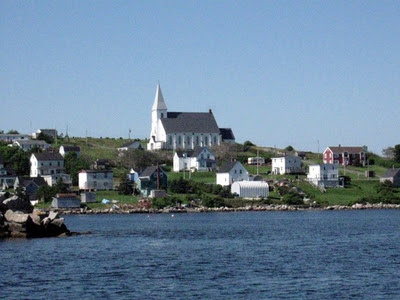 Canso is an old town, by New World standards and it is amazing how many of its day-marks are obviously of quite some vintage, but still standing. I am sure they must get battered by ice in the winter and they are undoubtedly built of soft woods, but in the middle of the channel leading out towards Ile Madame, was a structure holding a light. It was covered with shags – until I got my camera out – but although sagging and bulging, and well out of true, still appeared to be doing its job. 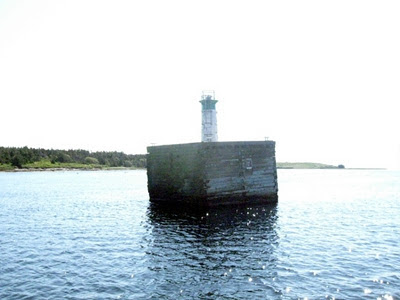 We drifted out and with no great distance to go, were quite happy with the light winds that took us most of the way to D'Escousse. If nothing else, it gave us an excuse to finish off the beer! 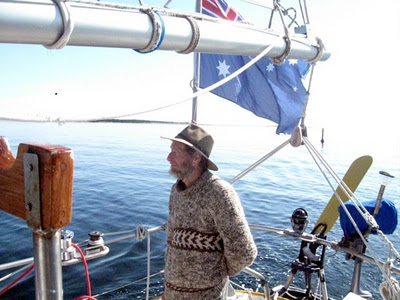 When we arrived at D’Escousse we found the harbour full of boats, enjoying the Yacht Club's annual festival. There was no sign of our friends Don and Marjorie, and after catching up with the irrepressible Claude, who shanghaied us to go and look at a building he's restoring (apparently to the accompaniment of a running battle with the local council); and visiting our dear old friend, 'Uncle' Bill's widow, who was baking vast quantities of bread for her son to take back home to Central Canada; and participating in the 90th birthday party of a complete stranger, we went back aboard. Trevor had been hoping to put Barky alongside to scrub off some barnacles and change the anodes, but this didn’t seem to be the right day for such a task!