My decision to have my own boat and live in New Zealand, rather than to carry on voyaging with Trevor, has added an extra layer of complexity to my life, which I could well do without. Worse though, by far, is the extra layer of expense and the concomitant excessive consumption that comes with it. For most of my life I have managed to avoid long-distance travel by any method other than small boat. Now I find myself choosing to fly long haul twice a year. It is the one aspect of my decision that I really dislike: not so much the flying itself, but the extravagance and wanton waste of the whole exercise. But it’s the price I pay for my eccentric choice.

This year Trevor and I were to get together in Nova Scotia. The nice young man at Flight Centre and I spent a long time in setting up the cheapest set of flights, with the least waiting time. All to no avail. About 3 weeks after everything was done and dusted, he asked me to come back into the office. Apparently airline companies in USA had changed their schedules and we had to do the whole exercise again. In a foolish bid to save money, I went by way of Los Angeles instead of flying direct to Vancouver and across Canada. Never again. Los Angeles must be one of the least-welcoming airports in the world, which I gather is saying a lot. With the original flights I had a wait of 7 hours – more than enough, so perhaps the fact that I now had 16 hours to wait influenced my negative reaction, but the impossibility of getting an affordable telephone or Internet access so that I could inform Trevor that I had at least crossed the Pacific, had not a little to do with it. That and the fact that they refused to take my bag from me until 3 hours before the flight was due to leave.


A volcano is Chile had been erupting and throwing ash into the skies of the Southern Hemisphere, and flights had only just got back to normal when I left, so it was important to reassure Trevor that I had managed to get away. In the end I telephoned – credit card only – and the 20 second message I left on our friends’ telephone cost me about $15.


We left LA 40 minutes late and I had to sprint across Newark to catch my flight to Halifax. This meant that I was unable to buy the duty-free bottles that I had intended to take as presents. However, when I eventually came through the gates at Halifax, there were Trevor and Don to greet me and it was all worth while. As it was close to lunch time and as my body, after 2 days of travel had no idea what time – or even what day – it was, a glass of beer seemed like the go. So we had a fine glass and a decent sandwich before driving back to Halifax.


Iron Bark looked very smart, swinging to her mooring off Don’s house and after enjoying a hot shower ashore (with lovely, big towels that Marjorie piled on me!), I went aboard and lay down for a few hours. It was good to be back on board a boat after all the madness of getting there. 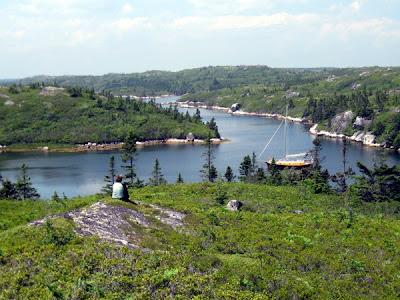 I got up in time for sundowners and Trevor and I enjoyed a wonderful evening catching up with our friends. I slept well and have to say that I never suffered from the slightest twinge of jet lag. I put this down to a lifetime of insomnia!


Don is a highly-respected writer and journalist and Trevor and I were both very surprised and honoured when he said that he wished to record an interview with us. Silver Donald Cameron is host and executive producer of The Green Interview, in which he talks about “The World’s Biggest Issues” with “The World’s Finest Minds”. Obviously, he makes exceptions! It was a fascinating experience: twenty-first century technology means that all is required is a camera operator, the interviewer and the interviewee. Little tiny microphones are attached to one’s clothing, there is no fuss about make-up or anything of that sort and minimal manipulation of lighting natural or otherwise. I have been lucky enough to know Silver Donald for more than a few years, which must have helped, but he was so relaxed that I felt as though we were simply chatting in the sunshine on the deck behind his house. Whether or not the interview will ever be shown, I don’t know. Neither Trevor nor I is used to this sort of thing and we may not have come across well. However, it was such a compliment that Don thinks sufficiently highly of us to feel we have something to say that may be of general interest.


Apparently the summer, up to the end of June, had been non-existent, but I seemed to have brought the Nelson sunshine with me. After a couple of days on Don’s mooring, we set off for our wee cruise. There is a huge amount of cruising to be enjoyed in the Maritimes and with the season being so short, most of my trips there have included a brief visit to Nova Scotia and a gallop along the coastline in order to explore Newfoundland and the Labrador. This time, I had said to Trevor, I would really love to explore Nova Scotia itself, to say nothing of catching up with friends that we have met over the years. I suspect that the logistics of getting me back from Newfoundland or Labrador may have something to do with the readiness with which Trevor accepted this suggestion.


We left Halifax on a foggy morning, with a light breeze to waft us down the harbour. If you sail in Nova Scotia, you’d better get used to the idea of sailing in fog! The fog came and went and was rarely enough to be a significant issue. Unfortunately, the breeze varied from flat calm to fresh enough to douse the topsail, so that on occasion we ended up motoring. We came to anchor in Rogues Roost later in the afternoon. It was just as pretty as I’d remembered.

The following morning we went ashore, looking for the path that Mr Loveridge’s cruising guide had assured us was there. In spite of following his directions with care, we could find no trace of it. Trevor volunteered to bush bash until he could find a way up, while I went back and moved the dinghy to a likely-looking spot. Trevor joined me onshore and we worked our way through some relatively thin scrub until we came out on top of the little island from where we could look around at delightful views.

Yesterday’s fog was long gone and we could enjoy the vista of inlets and islands that is what makes this part of the world such a superb cruising ground. Our bliss was somewhat marred by my being bitten viciously on the forehead by a deerfly. The plethora of biting insects – blackfly, deerflies and mosquitoes – are what prevents this part of the world from being a perfect cruising ground. Some would add fog, but I don’t, of which more anon.

We strolled around and then went back on board to loaf in the warm sunshine and I pottered around in the galley cooking something a bit special to celebrate our first night at anchor again.

The following morning, we left for Mahone Bay mostly sailing, but with the occasional use of motor when the wind died completely, with fog banks coming and going. We anchored in Deep Cove, which, in our cruising guide, had 5 stars for prettiness. Well, maybe it was once as pretty as that, but nowadays it is surrounded by over-large, flash houses and some sort of resort. All this building has really spoilt it.

Trevor and I went ashore for a walk across a peninsula to look over the other side. It was a pleasant enough stroll, but of course one can’t get off the road to find a decent walking track. And we agreed it would have been pretty nice to have found a pub somewhere. It has to be said that the cost - and difficulty - of buying a cold beer to enjoy in the sunshine, is one of Nova Scotia’s major drawbacks!

Thursday morning saw us leaving under sail, in bright sunshine. It was a glorious, sunny day, with a steady barometer and a light S breeze. It was great fun, tacking between Big and Little Tancook Is, although by then the fog had returned and at times hid some of the landmarks – even those that were quite close to us. We didn’t get lost, of course, because we had the GPS. But GPS also makes it less fun.

I remember with great pleasure the times when we sailed Badger in the Maritimes and had to work so hard to find our way around in thick fog. We would examine the chart and work out a route that took us over – or past – obvious features, such as a shoal, or a steep-to skerry that we could approach sufficiently closely to see or hear, without risking running aground. I would steer, watch the echo sounder and keep a look out; Pete would watch the log and work out the next course shouting up such things as ‘you should see a skerry to port in about 3 minutes’. It was enormously satisfying to bring up to anchor in a harbour that you hadn’t even seen, and then wake up in the morning to discover where you were. On one or two occasions, we entered and left without ever getting a clear view! Even now, I would like to ignore the GPS and use my old skills, but I think Trevor would reckon I’m daft.

The wind varied from about F2 to the occasional F5 and Trevor was tucking in and shaking out reefs. I timed him: five minutes from start to finish in good conditions. A bit less to shake one out. No wonder I like junk rig.


We came into Lunenburg under sail – which generally means mainsail and jib and often a bit under-canvassed, as we were on this occasion; in fact we ran out of wind at the entrance to the harbour and had debated starting the engine. And then, just to be spiteful, we were hit by a nasty squall just as we were coming into anchor. Trevor wanted to run down, turn round and reach back, which I find can be quite scary, because things are happening too fast and in a hard gust, gybing is nerve-racking. I much prefer to beat up under more control, going slower. Fortunately the mainsail came down OK in the squall, but the jib sheet had got caught under the staysail gasket when it was stowed. And for a moment, it was a bit tense. We dropped the hook and broke out the rum, discussing the boats at anchor.

What an excellent piece of work on your part, inspiring!! Enjoy!!