Unbelievably, we ran out of water last night. Trevor was convinced that somehow I had managed to get through 180 litres since we left Halifax, which seems unlikely. I reminded him that I do still live on a boat when I’m not on Iron Bark and, moreover, at present have to fill up a 4 litre container as my tank needs repairs. And that usually lasts me more than a day. In the end he agreed that possibly there had been an airlock when he filled the tanks and that they hadn’t filled properly. After some debate about bludging water from one of the nearby houses, we decided instead to go to Sheet Harbour, where we could top up fuel and fresh food, too. 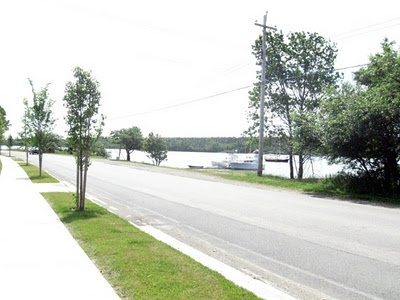 There was no wind, so we motored the 6 miles there.  We launched Lisa and rowed to a small wharf, with a launch alongside, as there was no other good landing.  As we tied up, a man walked over the road from the house across the way and welcomed us to the town.  It was his wharf and far from being irritated at our appropriating it, he told us that we could use his outside tap to fill up our water containers.  Nova Scotians are such generous people!  So while Trevor filled water containers and bought diesel I went and found a supermarket.

Sheet Harbour is an attractive town and it was apparent that it had much civic pride.    There were handsome houses and the main street had been ornamented with new  Victorian-style lampposts and trees had been planted by the sidewalk.  Before shopping, I walked from one end of town to the other, stopping to admire the rapids that explained the fast-flowing current in the river.  They had once been dammed and diverted for hydro-power for a saw mill.  Now the river is dammed further up and the water runs freely here.  It was an attractive spot. 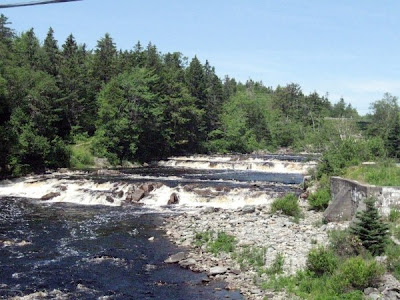 I had forgotten how fierce the sun can be in Nova Scotia and my face had been getting burnt, so I went looking for a visor. I had been surprised that I couldn’t find one in Lunenburg and now, incredibly, this item of head wear that was once so ubiquitous was nowhere for sale. I mentioned this fact to a nice lady in the hardware store. She promptly picked up the phone and rang her husband at home, giving him strict instructions as to where he should look for some ‘spare’ visors that she had, and to bring them to the shop. This he duly did and she offered me one from what he had brought. She refused any payment and insisted that I accept it as a gift. I was very touched at her kindness and consideration.

On the way back, I thought I’d get us some grog from the liquor store, and as I went in, there was Trevor coming out. Two minds with but a single thought! We combined forces (and purses) and staggered back to the boat with shopping, bottles and cans.

After we’d stowed our purchases, Trevor took me back ashore to the garage to show me a chain saw that he’d seen. Sawing up firewood is not his favourite task, particularly the pine that it most common around Nova Scotia. It takes quite a lot of effort and burns quickly. I had to admit that the little saw he showed me was light and small. And I know that Trevor some times was cold and damp in Chile simply because it took so long to acquire firewood. So ‘why not?’ I said and the deal was done. The Good Old Boys sitting around the shop part of the garage, drinking coffee, took a great deal of interest in the whole debate and transaction. I guess not a lot happens in Sheet Harbour. 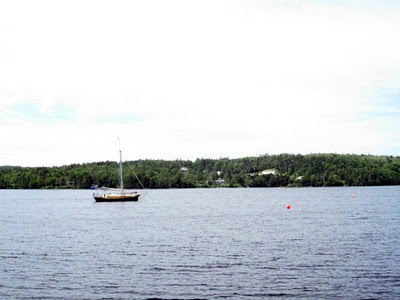 We had noticed a pretty spot back down the river and decided to move back for the night, but the wind died, so after drifting a couple of miles, we headed inshore and dropped the hook in Watering Cove.