We left today in very light winds, but sailed until we came to the St Andrews Passage to Canso. I've been dying to do this for years, but somehow it has never happened. It's supposedly quite tricky, but it turned out to be very well-buoyed and quite straightforward. 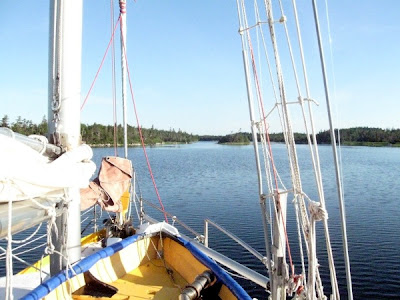 Not even very exciting, it was all so well organised, but very pretty and well worth while! By the time we got there, what wind there was had headed us and there was a foul tide running, so we started the engine. There were more buoys and they took us along a slightly different route from that shown on the chart. We saw lots of seals near the strangely-named Sherewink I. The shores, covered in stunted spruce, had a number of what were apparently holiday homes along them.

We ambled along until we came into Port Glasgow, which is a real misnomer, where we anchored. There is no port at all and the only sign of any building is the spire of a church peeping over the hill. But it’s a spacious harbour, although there are a number of rocks and shallow patches that would make it awkward to sail in and out of. 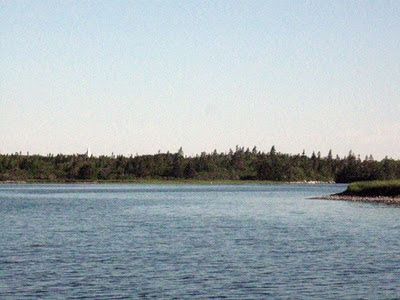 HI! To say you are inspirational would be a fine example of understatement. I am trying to get my boat going, and after having been defrauded by a company triple-charging me for an engine installation, I am nearly broke, but still positive. Is it possible that your friend with the self-steering know-how sells the gears for a reasonable price, knows where to get them, and in general can direct me to something that I can afford? I did see the DIYs by the one fellow online, but I can't for the life of me figure out how to make the gears. I teach english, so maybe that's why? ;o) thanks so much, I really enjoy the blog. mcameron3@gmail.com