The Road to Hell is Paved with Good Intentions

Golly - I can't believe how long it is since I wrote anything for this blog!  It was first on my list of New Year's Resolutions: Blog More Often.  So much for good intentions - I am blithely sprinting along the road to Hell at this rate.

One of the problems is pictures.  Blogs without pictures are, I gather, a no-no.  Now I, in case you hadn't noticed, am a wordsmith, and I don't think in pictures.  Without exaggerating, when I look through a National Geographic, I read the captions before looking at the photographs.  So when I'm sailing along enjoying myself, I rarely think about taking photos.  However, with the thought that I might write the odd article for a magazine, who would be kind enough to pay me for my burblings, I keep my camera set to high resolution, so that the photos I take are something a magazine can use.  Trouble is in NZ, Internet data is expensive and so if I upload a photo, it makes sense to reduce its size down to something that looks fine on the blog, but doesn't guzzle my MB.  And that takes time.

'Time!'  I hear you scoff.  'You've got all the time in the world, Annie. What are you talking about?'  Yes, I know.  But somehow it just slips away and I always seem to have a huge backlog of unanswered letters, unwritten articles and an out-of-date blog.  I have thought about this long and hard and have had to come to the conclusion that I am extremely inefficient, very slow and, I fear, probably rather lazy.  So for those faithful friends who keep looking at this blog, there is my apology and feeble excuse.

My summer started wonderfully but has gradually gone down hill.  All will be revealed.  One of the best aspects of it has been my gorgeous little dinghy, Fan-tan.  I mentioned her in my last blog and she has caused more than a little interest.  I decided before I got going for the summer, to give her a little refit and paint her in the 'house colours'.  Needless to say, it took longer than anticipated, but I'm delighted with the result: 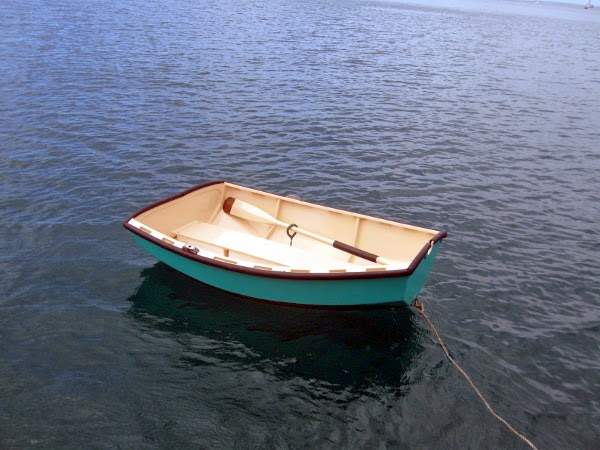 Ain't she sweet?  I'm besotted with her.  This time, for the fendering, I used alkathene tubing.  It's not as soft as the stuff I used previously, but is tougher.  If you tie the dinghy alongside, it would scuff the topsides, but such a light dinghy, even colliding with the hull at speed, doesn't seem to do any damage.   I can easily haul her on board, but haven't yet fitted chocks, as I'm experimenting to see where she's least in the way.  Again, because she's so light, it's easy to tie her immovably into place. 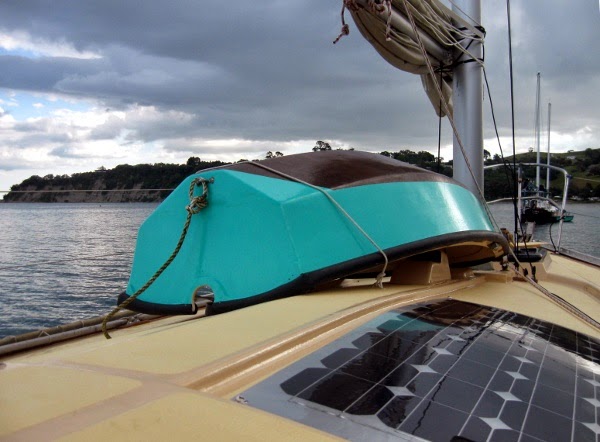 John Welsford, her designer, is well aware of not only my infatuation, but the amount of interest that she's caused.  We agreed that 5ft 1in is a bit too much of a hobbit-craft for your average person, so he has designed Scraps - a 6ft version - for more normal-sized people.  I've seen one in build, and she looks just as purposeful as my Fan-tan, but considerably bigger.  She is still very light, however.  Should you fancy one of these paragons, contact John at jwboatdesigns@xtra.co.nz

My first foray, once Fan-tan was safely on board, was to set off down to yet another junket off Mahuarangi.  It was a bit of a rolling junket, with boats coming and going, but hugely enjoyable, with some good conversations, good sails and beautiful anchorages.

With 10 days to go, a couple of us sailed up north in company, heading for Christmas in the Bay of Islands. Here is a typical view of how I saw La Chica, most days. 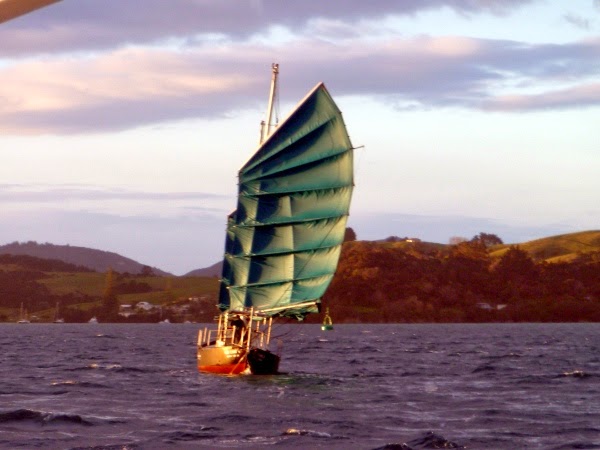 By the time I had my sail up and everything stowed away, she was somewhere in the middle distance.  She is a quite a lot bigger than Fantail, but for such a Sherman tank of a boat, she sure pulls away quickly.

We stopped in Whangarei and Whangaruru on our way, but separated at Cape Brett, where La Chica headed off for the Cavalli Islands while I went down into the Bay of Islands to catch up with an old friend: Alan on Zebedee.

Zebedee is a clone of my beloved Badger, in which Alan has out voyaged-on-a-small-income the originator.  When he arrived at the Pacific end of the Panama Canal about a year ago, he celebrated their circumnavigation together.  It started in BC, from where Alan made his way down to Mexico (and Panama) before heading off through the Pacific Islands to New Zealand.  He based himself there for a few years, and then continued his circumnavigation via Indonesia, Asia, Madagascar, South Africa, Brazil and the Caribbean, finally ending up back in Panama.  He transited the Canal and sailed back to NZ.  For a lot of this time he was accompanied by his New Zealand partner, Pauline, but she decided against the Pacific crossing, so he was back to being single-handed.  These days, I don't suppose the circumnavigation is particularly unusual, although the income on which Alan lives wouldn't keep a heavy smoker in cigarettes.  What is unusual is the fact that the 34ft boat doesn't have an engine.  (He borrowed a 10 hp outboard to get through the Panama Canal.)  Instead, Alan uses consummate seamanship when there is any wind, and a long yuloh when there isn't.  (I've also seen him using the latter in very light winds, propelling Zebedee from puff to puff so effectively that I assumed he'd found a breeze I didn't have.)

I was so excited to see him again and thanks to modern technology (ie texting on cellphones) we caught up with each other easily and had a fine afternoon sailing around photographing each other before finding an anchorage for the night.  Here is Zebedee romping along. 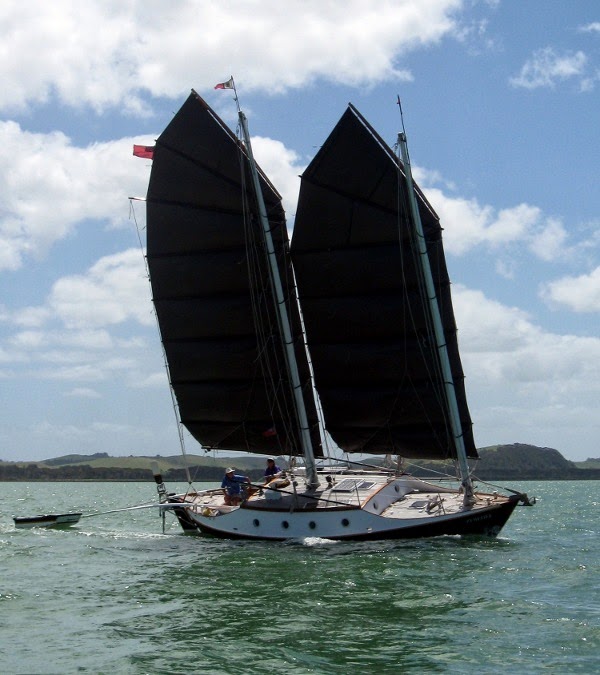 And (an unusual) one of Fantail, just so she doesn't feel left out. 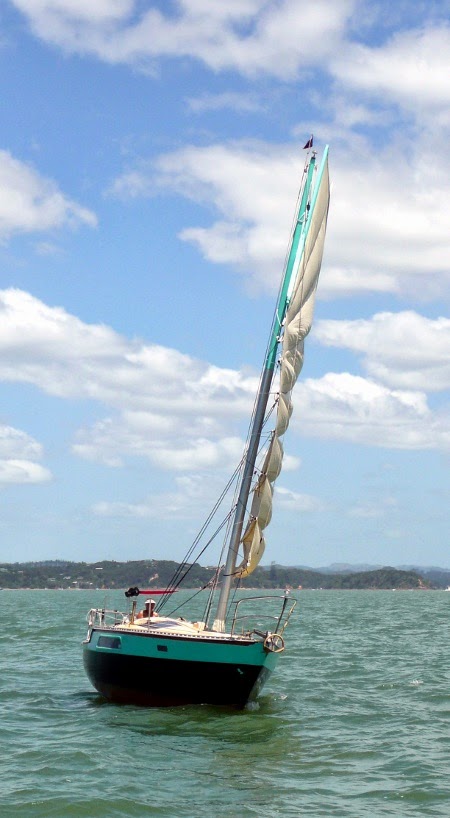 Welcome back Annie. You (and your exploits) have been missed.

Thanks for the positive comments on FanTan Annie, I put the last bit of paint on "Scraps" this morning and will be tossing her in the water when the tides in a but further.
( For those who are not in the know yet, the "design name" for FanTan was "Offcuts", hence "Scraps" as that was what the next one was built from.

I'm hoping that its as good at its job as its predecessor,.

many hearty Thanks Annie for your good council! You are followed, admired and even adored the bloody world over lass!
a hearty heap o'good on you Annie!