I've done two things this summer, that I have declared I will never do: gone racing and delivered a boat.  More of the latter, later

The first, to be fair, was entirely frivolous.  The delightful little Russell Boating Club holds its Tall Ships Regatta every year.  Now the Tall Ships are rarely tall and most of them would not normally be described as ships: to qualify the boat has to be over 30ft and to have two masts.  However, one or two taller and shippier vessels generally join in and a very fine spectacle the fleet makes.  In addition there are the Classics (boats over 25 years old) and, this year, there was an All Comers class for any who didn't qualify for either of the above, but wanted to join in.  This made a lot of sense, because it made for fewer spectator boats and thus a more ordered start line - and no doubt it helped swell the club's coffers.  Fantail was flattered to be described as a 'classic', although even her greatest fans might debate such a sobriquet.  Still, if age was the only qualifier, she qualified.  Two other junks, Shoestring and Zebedee also participated,


but they qualified as Tall Ships, so we didn't sail together.  To make the day more fun, I took on board another junkie, Marcus, whose 8ft Pugwash is too small to join in.

I wasn't in the slightest interested in making 'a good start' (although my crew thought I was being a bit feeble), but was far more concerned about keeping my wee ship out of everybody's way, so (along with quite a lot of other participants) I crossed the line about 10 minutes late.  There was a thundering great cruise ship anchored slap bang in the middle of the bay, and I made the decision to keep to windward of it, even though that meant a bit of short tacking.  The other possible advantage was that the ebb tide might help us.  Both decisions paid off and we had a fine sail, close hauled up the Bay.  It soon became apparent that Fantail's closest rivals were two gaffers, Dolphin of Leith, which had sailed to New Zealand from Scotland, and another local one, whose name I can't recall, I'm afraid.

As we headed up towards Urupukapuka, we could just crack the sheets, which made up for our considerably shorter waterline.

For much of the race it was neck and neck, (even though I used the wind-vane for some of the time, so that we could eat lunch in peace) but on the final leg - a run - Fantail convincingly left the opposition behind. 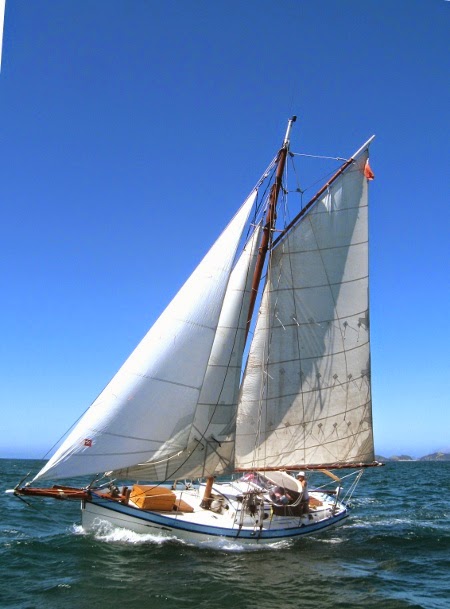 We came in 52nd out of 54, but did a lot better on handicap - 19th.  I was very pleased with my little ship, but in all truth, even more pleased with our generous handicap!!  Shoestring and Zebedee were way behind us, having made the mistake of going to leeward of the cruise ship and getting stuck there, so Fantail also had the satisfaction of soundly beating her big sisters.  Roger and Alan generously complimented me on my tactical abilities, but I have to confess it was largely luck.  The nice thing was that the boat ahead of us crossed the line 20 minutes before we did, which meant that my late start had made no difference to the end result.

The day was rounded off by a party and prize given at the Boating Club, which was a lot of fun, too, with a hangi (food cooked over stones in a covered pit) and lots of discussion about the various boats and the race.  There was no bitching about handicaps, and there were (as far as I could tell) no protests.  Very few people took the racing seriously, although most of us tried to get the best out of our boats.  And the organisation of the whole event, by dedicated volunteers (an inconceivable number of mussels were scrubbed on the morning of the race) was truly awe-inspiring.

One of the things that I appreciated, and that a lot of other participants commented on and enjoyed, is the fact that the Tall Ships Regatta  is about the boats and the people.  It's a way of bringing together lots of interesting boats to provide a spectacle both from ashore and on the water (there are many good lookout points in and around Russell), while everyone sails around having fun.   In a time where everything's value depends solely on the 'bottom line', it was refreshing to be at an event apparently run for the sake of the participants rather than to make money.  Indeed, I'm sure that if the RBC tried to make the Tall Ships Regatta into a money-making event, they would find they had killed the goose that lays the golden egg.  For those who know of it, the Tall Ships Regatta reminds me of the Dourarnenez festival, an event for the boats and the sailors that incidentally brings money into the town, rather than being held for the money and incidentally bringing in the boats.  I can understand why people join in year after year.
Posted by Annie Hill at 11:07 am

Hi Annie - glad to see you are back posting on your blog again. My husband and I were those crazy people on Rainbows End, another Raven 26, who waved and took pictures of you and your boat in Whangarei this summer. We loved being able to get a glimpse of your boat!

Annie said: "I've done two things this summer, that I have declared I will never do: gone racing and delivered a boat. More of the latter, later."

So how much later is later? Enjoy reading your blogs.

After reading your post, it occurred to me that after 15 years of owning a sailboat, I have never been in a regatta. Not even on a friends boat.

Guess it never appealed to me but I do think I would have enjoyed the light-hearted nature of the Tall Ships Regatta.

I know, I know - there just don't seem to be enough hours in the day. Watch this space - I promise to write more, soon.