One day, I'll fit the deck beams - promise.  In the meantime, I'm still fooling around with big sheets of plywood that need to be fitted before that happens. 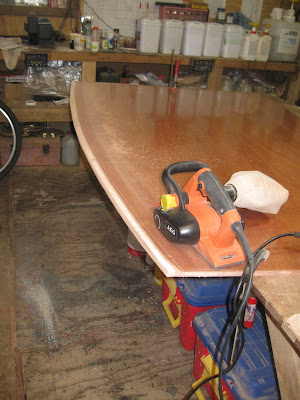 I can't decide, in advance, exactly where the hatches are going to be installed in the saloon/galley cabin sole, or even if I'm going to install hatches at all.  I may just divide the plywood into manageable pieces.  My water containers are going to live under the forward part, so I do need to be able to get under it regularly.  That being so, I 'lofted' the shape and planed a bevel on it.  I tried fitting it three times, but it was too big, and by the third attempt my back was complaining.  (It's almost a full sheet and needs lugging up the scaffolding and then - gently - placing down inside.  My hands aren't strong enough to grip a sheet and lift it, so I decided to wait until Marcus was around to give me a hand! 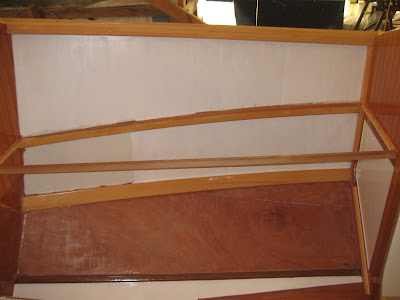 Still, I could fit the other big piece of plywood.  I'd cut out the athwartships framing for the forecabin locker ages ago and now fitted a kauri fore-and aft frame.  Taking a leaf out of Badger's book, I butted the joints and dowelled them after the event.  A good way of making strong joints for bodgers. 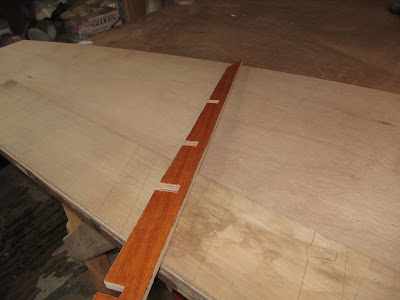 I've finally managed to get my head around a 'tick stick'.  I've read about it dozens of times, but always by people who assume you know what they're talking about.  Well I didn't.  However, I've recently discovered a site for DIY boatbuilders.  Most of the posts are quite irrelevant to me, but there are some little gems, including one that told me all about how to make and use a 'tick stick' .  So I followed the instructions. 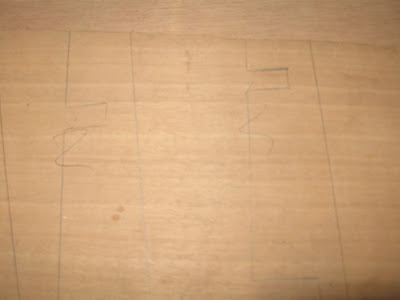 The thing that makes this 'tick stick' work for complete amateurs, is that you cut out a series of notches in the wood and include these in your locating marks.  The notches all being different, it makes it easy to be sure you've got you stick back in the right place.  (If you want to know more about the process, please follow the link above.  It's explained far better than I can!) 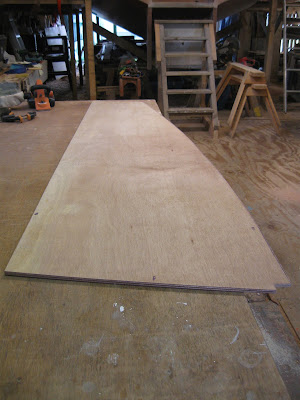 I marked out the plywood and then cut it conservatively before offering it up.  I also checked the measurements from the framework, by measuring.  By the time it was trimmed to fit, I was very impressed with the 'tick stick' method.  I could have trusted my original markings and cut it accurately.  Before I could do any more on it, I needed to flocoat the underside ready for paint.  You don't need a photo of that. 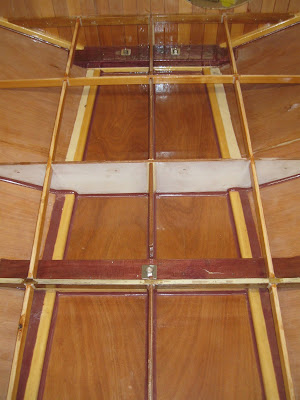 It occurred to me that before I struggle once again to fit the cabin sole, it would be wise to put some extra framing in place, first.  This was all cut to length, notched and then glued into place. 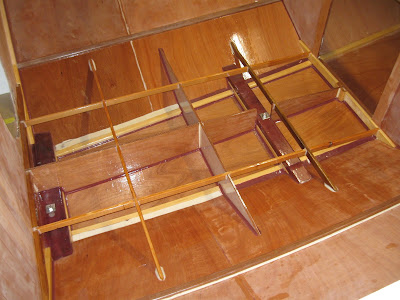 Then the corners were filleted - the outboard ends of the bearers had already been filleted into place.  I considered whether or not to paint it all, but decided it would be a lot quicker simply to put one thick coat of epoxy over all the bilge area up to the first stringer.  There will be light enough to find my water containers and anything that is stored aft.  Great stuff, epoxy, for making things look good!
Posted by Annie Hill at 1:40 pm

Hi Annie - will you only use jerry cans for water storage or will you also have a built in tank or tanks ?

I recall that Ariel ( Wylo 32 - full keel ) only used jerry cans which they stored in the bilge.

I certainly will. 10 litre ones. I cannot understand why people bother with the complexity and vulnerability of built-in tanks. One of those occasions when More is definitely Less. I can easily stow 10 containers under the cabin sole, which at my usual rate of consumption is about a month's supply. Yes, I seem to remember that Ian took the same route.