Having started to make the forecabin locker so that I could put in the big piece of plywood, it became obvious, that underneath would be more pieces of plywood, which would be a lot easier to glue in from the bottom up. 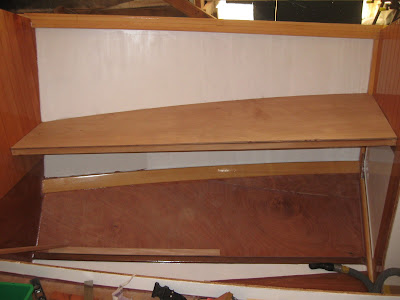 The top of the locker will simply be a shelf.  I've thought about incorporating a bookshelf at one end for larger books, but as well as the weight being high up and forward, I decided it would make the cabin feel cluttered.  In a small boat it's difficult keeping weight out of the ends, or avoiding weight high up, but I try. 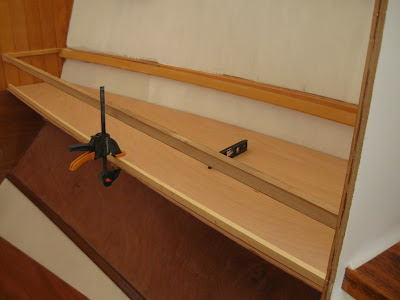 Under the shelf will be drawers.  The conventional way is to make them on rails, but I decided it would be easier simply to put them on another shelf. 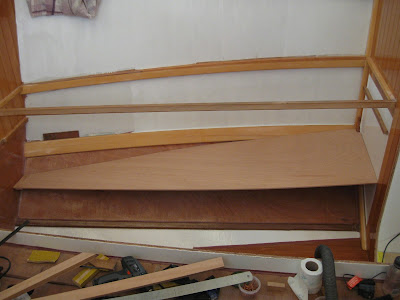 And under that shelf will be a third one.  I anticipate keeping clothes in this locker.  I'd though of putting the sewing machine there, but I think under the bunk might be a better place for it.  It's not too heavy to lift from there.  (Originally, I'd hoped it would fit forward, but it would be awkward to wriggle in and out of the space and around the tabernacle.) 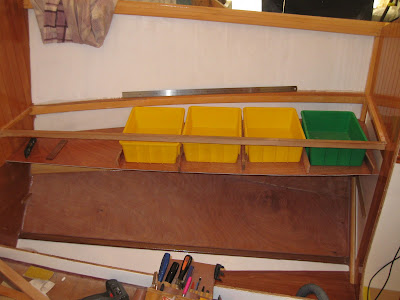 Making drawers is a time-consuming business, even if you just make very simple boxes.  I decided to cheat by buying plastic boxes instead (I bought the green one as a sample and when I went back, the rest had sold out!).  As you can see, the after ones are a bit wasteful of space, but this boat is going to have heaps of storage and I don't want to overload her with more and more 'stuff'.  The forward space will a locker with a simple door for access. 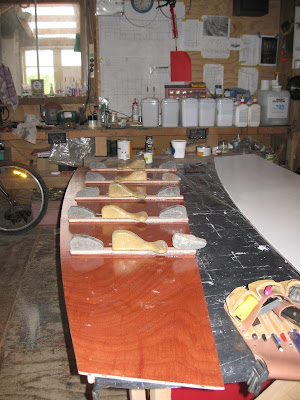 The drawers can obviously slide from side to side in their spaces, but the fronts will prevent them from going outboard and there will be catches to keep them in place.  There is much less reason for them to slide fore and aft, and I decided runners of 12mm ply would do the job.  As I had some precoated scraps kicking around, these were ideal.  I put them down on epoxy with weights. 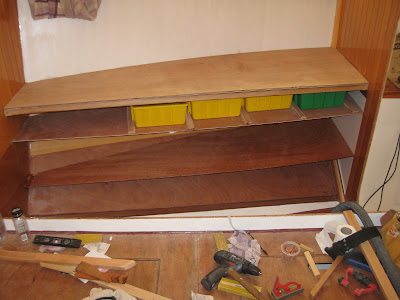 Here are the shelves roughly in place, drooping sadly.  I will hot glue chocks underneath to support the outboard edge and then run a big fillet to hold them in place. 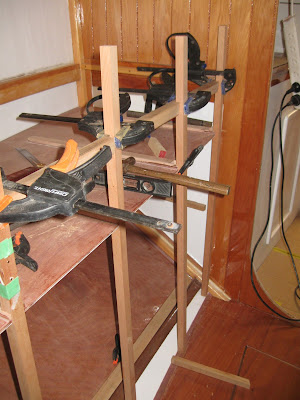 Trying to draw these things out in advance doesn't really help me much, because I still can't visualise it all, so I have to 'wing' it.  Needless to say, this usually includes a bit of going backwards, but there we are.  The shelf holding the drawers is being used to place the stiles.  There will be doors underneath the drawers and, under the lower shelf, the awkward triangular place will be the ideal shoe locker.  (My friend Maren instantly noticed this: she's the only other person who has thought about the fact that shoes require a home.  It is actually on my list of 'things to think about finding homes for'.  Yes, I do like shoes.) 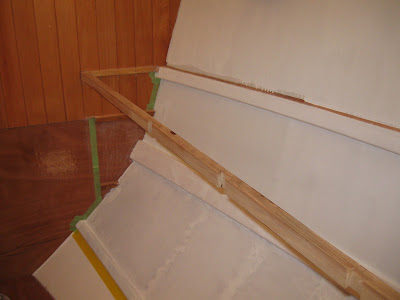 And once again, it's back to painting, having found that doing this in advance saves time, frustration and getting paint in my hair.

Although you won't be able to see the bit of panelling, I will, when I go rummaging into the depths of that locker, so it has to be masked off.  (I believe this is known as Compulsive-Obsessive Disorder.) 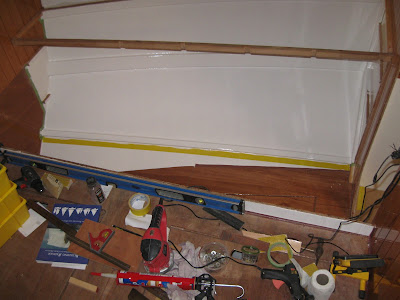 Unlike many people, I enjoy painting out lockers.  It's relatively mindless, because not even I fuss too much about the finish.  I find fitting out very satisfying but incredibly difficult due to my inability (a) to visualise more than the outline of what I'm trying to achieve and (b) to think ahead more than a couple of moves at a time.  So splashing paint about is relaxing. 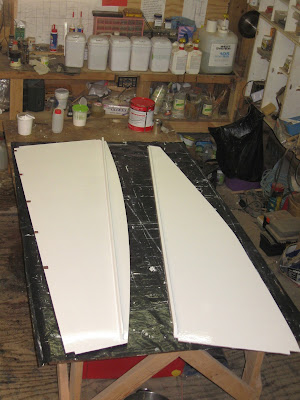 While I'm at it, I'm painting the parts of the shelves where the reflected light will help.  It seems a waste of effort to paint the drawer shelf or the bottom of the lowest shelf and it's a lot faster to flocoat it.  I would like to finish this boat before the end of the decade. 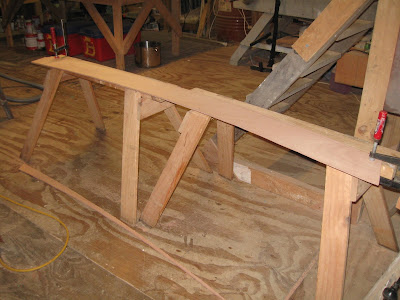 After weeks, if not months, of debate, I have made the major decision to put a narrow shelf along the port side over the bunk.  The stringer is not that high above the bunk, but there will be a porthole between it and the deckhead, so that limits where a shelf can go.  I've been worrying about catching my shoulder on it, but in the end decided I could get away with it, if it's no wider than 150mm.  That allows me to put my morning cup of tea down (it's hard to imagine that I'll ever live in such a relaxed way again!) and the forward end will hold part of my library.  I was amazed how many books are narrower than 150mm.  I used the top shelf from the starboard side to make a pattern.

So, back to the paint brush.