For me, fitting out the boat is the best bit of the building.  If I make a mess of it, it's not a catastrophe, like it would be if I made a mess of the rudder or mast.  It also feels creative and I like using my mind to think about what is needed in the way of accommodation for me, trying to think what will go where, and what spaces are needed.  No doubt I shall forget several things on the way, but that's only to be expected. 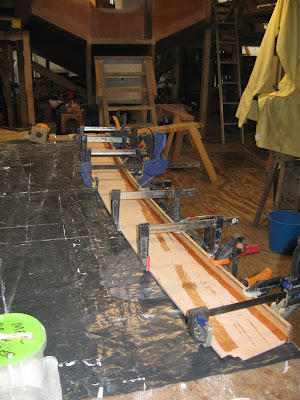 Making the little shelf to go over the bunk was quite straightforward, but I was a little surprised at how extremely curved it turned out to be.  Fortunately I managed to find a piece of flexible wood that would take the bend.  I'm not exactly sure what it is, not kauri, but similar enough that it won't 'shout at you'.  The clamps couldn't get a very strong grip on 6mm plywood, but the epoxy did the job.  Wonderful stuff. 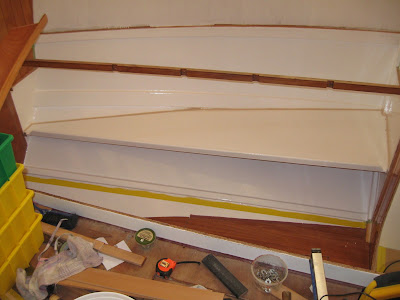 Having painted the shelves for the big locker, I could then start to fit them.  The lower one was pretty straightforward, glued to the runners and then with a large fillet to the hull.  It had to be propped from underneath, because even with the fiddle, it had a strong tendency to droop.  The gap outboard, ended up wider than anticipated, but once the epoxy had set up, it was very solid. 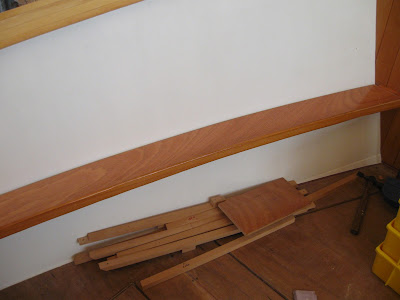 Then I fitted the little shelf.  I used a router to slot the supports for it.  With a fiddle inboard and a wide stringer outboard, it will be very well supported.  The forward end will be for smaller books, the after end for my morning cuppa.  I look forward to sit up in bed, looking at the view, with a cup of Lapsang Souchong,on a winter morning, having lit the fire to  warm up the cabin. 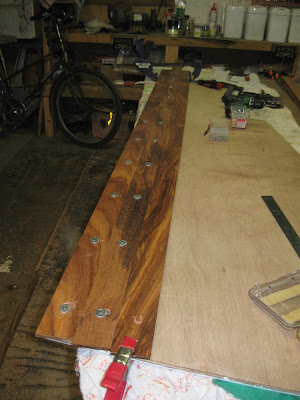 My beautiful tigerwood is being laminated to the counter top.  Sawn in two and then planed, it produces a lot of expensive sawdust but the total weight isn't much more than an equally-stiff plywood counter top would be.  All these shelves help add stiffness to the hull.  I had, at one time, thought of making them removable, but it seemed silly to have dead weight instead of the joinery all adding to the boat's strength. 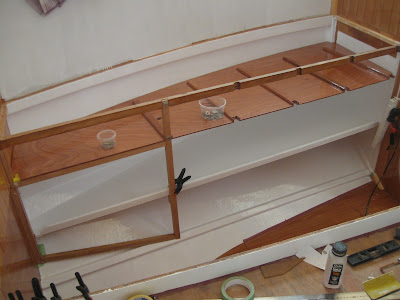 The next job was to make the framework for the locker doors.  The forward end support on the bulkhead had to be glued in after the shelves and I kept experiencing mild panic that I might glue something in place and then find that I couldn't manoeuvre the shelves into position. 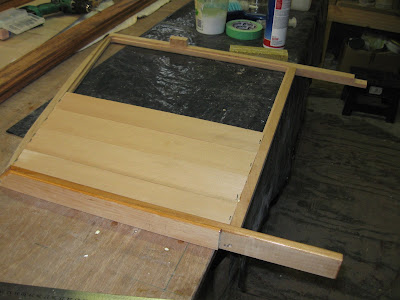 Bookshelves will go across the forward bulkhead between the bunk and the locker.  The 'dead space' outboard will be accessible, with a bit of a wriggle, through the adjacent door.  There's so much storage that I doubt much will end up there. A panelled bulkhead fills in under the counter. 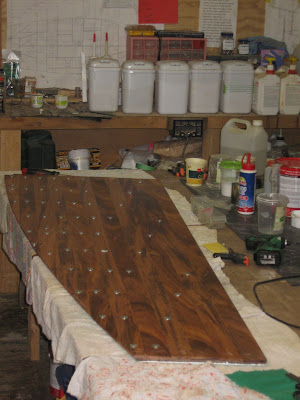 The tigerwood dry-fitted to the counter top.  Again, I think plugged holes will look fine and it's a lot easier than trying to clamp these big projects because I don't have the necessary sash clamps. 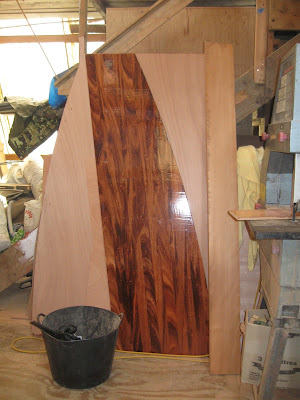 The counter top coated and put to one side in readiness.  The dark, figured wood contrasts beautifully with the kauri. 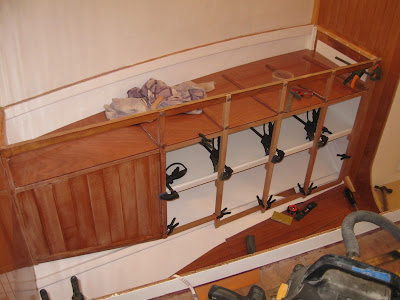 Gluing in the top shelf. The framework was all put into place, but not yet glued, so that I could get under the shelf the following morning in order to fillet it along its outboard side.  I also had to be careful that the framework didn't get glued by mistake! 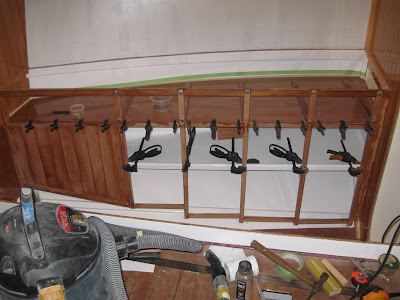 Unable to think of any reason why I shouldn't, I then finally glued the whole framework into place.  I had attempted to fit the lower frames from the bottom of one stile to the bottom of the next, but soon realised that, especially with a stringer in the way, it was well beyond my capacities.  So I fitted them horizontally, arguing that they will allow for a little ventilation. 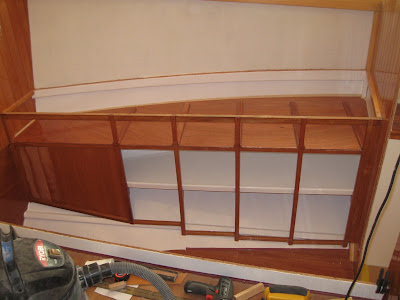 Finally, I coated the whole lot with neat resin.  (I didn't have quite enough for a second coat on the forward end of the panelling.

Next job: make the doors.  (I'm still painting the little shelf, in case you were wondering.)
Posted by Annie Hill at 1:12 pm

The wood finish with different timbers looks great.
That should be a comfortable pleasurable living space.
Really enjoy your posts and progress.

Thank you for that. I enjoy the different textures and colours, too, although I know not everyone would agree. I am so looking forward to living in the boat as well as sailing. Even the most avid sailors spend more time in harbour, so I think it's important that they work as well as a home as they do as a boat.

That countertop is GORGEOUS!