Well, this is a blog.  But if you are only interested in the boatbuilding part of it, then go down the page until you see 'Back to Boatbuilding' in big, friendly letters.

I heard a programme on the radio recently where the interviewee was pointing out the difference between being a materialist and being a consumer.  They are, in fact, antithetical because a materialist loves things and a consumer loves buying things.  So, a materialist hangs on to her beloved 10-year old boots, a consumer dumps them for new ones.  Materialists cherish their possessions, consumers only enjoy their newness.  His point was that we need to appreciate the difference so that we can live in a prosperous world, with a lively economy, but without using too many resources.  I guess his point was that the service economy makes the world - ie the money - go round without significantly depleting our wonderful planet.  I found this interesting and I also like the concept of being able to use the word materialist without any pejorative overtones.  One has a lot of time to fret about the future, building a boat.

New Zealand is a magic country, in many ways, and considering our latitude, we get the opportunity of enjoying things that many people have to travel great distances to encounter.  We have glaciers; sailing up here in N North Island I have seen Giant Petrels and Sooty Albatross - birds I associate with South Georgia.  Equally I can buy locally-grown bananas and avocados, and even sugar cane, should I so desire.  Recently, those of us at Norsand had an unexpected treat.  A young Leopard Seal decided to pay us a visit. 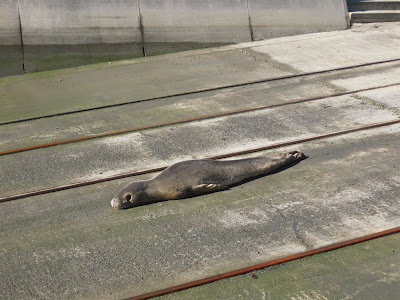 Now the last time I recall seeing a Leopard Seal was in the South Orkney Islands, so you could say that this youngster was a bit out of his range.  I was quite impressed that all the lads in the yard instantly identified it, until I heard that apparently it had been hauled out on one of the pontoons in the Whangarei Town Basin, to the consternation of the Powers That Be, who had closed the pontoon off so that people wouldn't get hurt.  The media had enjoyed the story. 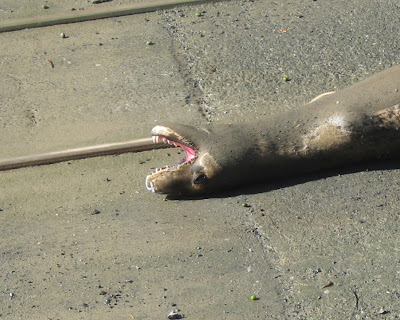 To be fair, it was but a baby - no more than 6 ft long, but it has to be said that even at this age its teeth were pretty impressive.  For sure, the yard cats were sensible in keeping well away from it.  And even the slipway team was a little reluctant to shoo it away when they needed to use the slip.  They resorted to turning a hose on it, but it seemed thoroughly to enjoy the fresh water all over it, its smile getting bigger as it was sprayed.  Finally the pressure was turned up high enough that it decided that this was no longer fun and, somewhat reluctantly, abandoned its sunbathing and swam away.  Sadly, it hasn't returned.  But what a privilege to get a visit from one of these magnificent animals.

OK, now where were we?  Well, actually, 'we've' taken a week off to go and visit my old friends Katie and Maurice in Nelson.  I love Nelson - such a lovely little city, with a view of the snow-topped mountains (a little had just fallen when the plane landed!) and lapped by the waters of Tasman Bay.  Compact, with lovely parks, bookshops, galleries, restaurants, a waterfront and a river.  What more could anyone wish for?  Well, some better cruising nearby, which is why I'm based in Northland.  But if I weren't a sailor, I'd be in Nelson, or possibly nearby Motueka (Mot to its friends), where I went by bus to visit the Tiddles.  So great to catch up with friends and more than worth abandoning my labours to do so.  I also got to see what Pirate Pearl is up to and had lunch with Dennis, catching up on all the goss.   Thank you, all of you, for making me feel so welcome.

Then it was back to the shed and work. 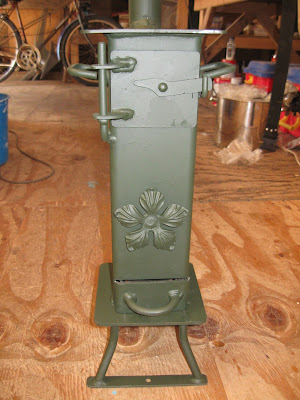 In my absence, my new stove  had arrived.  No window, admittedly, but the price was right and it looks well made.  I'm rapt with it.  I may even go and buy some nice yellow, heatproof paint to pick out the lovely little flower.  By the way, the stove is dark green - it's not just the photo.  Isn't it sweet?  I can't wait to have it lit, with a kettle or - better - a jug of mulled wine on top.  However, it will be a while yet, before I get to enjoy that experience. 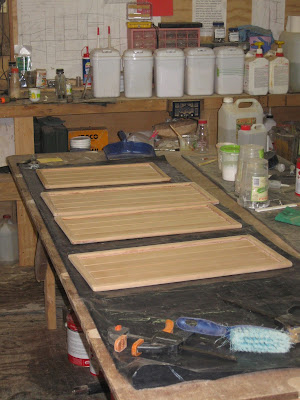 In the meantime, I've been carrying on in the forecabin, making the doors.  Badger doors.  Why not?  I liked them and I know how to make them.  Moreover they are very lightweight.  For those interested, I assembled them in the locker framing itself, edge gluing the four corners with PVA.  (I used PVA because if a bit dribbled unnoticed, the wood wouldn't be stuck forever.)  Then I gingerly removed them - PVA isn't that good a glue - and putting them in a wood vice, dowelled each corner, again with PVA, which is good in this job.  Once it had set, they could be routed for panelling.  The panels are cut from kauri, chamfered to look like T&G  and put into a rabbet that is routed round the back edge. 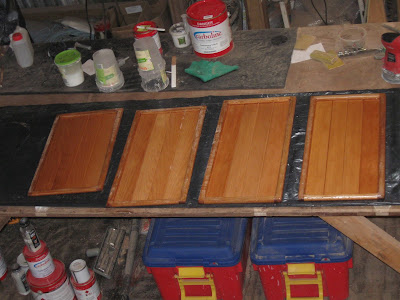 Then both sides of the door are coated with neat epoxy, ensuring that it penetrates any gaps in the joints and between the panels.  The finished door is astonishingly stiff.  I don't recommend putting your hand against the panels to stop you falling, but they are well strong enough for normal use and abuse. 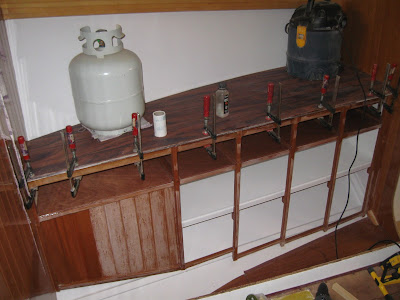 Finally, with the doors ready, it's time to make the drawer fronts, so now I could glue down the counter top.  It fits quite nicely and judicious use of a full gas cylinder and the vacuum cleaner along the outer edge, made for a good 'squodge' of glue, to use a technical term.  (Lugging the gas cylinder up the ladder was a timely reminder of one of the many reasons I don't want to cook on gas!)

To finish the forecabin I 'only' need to make a fiddle on the counter, make the drawer fronts, fit the doors, make some bookshelves, and cap the bunk side.  Oh, and varnish it all.  I also need to finish the cabin sole, but can't do that until the tabernacle is in.  There are four portholes to fit, too.  There's still a bit of a way to go before I can move on.

Glad to see the stove issue can be put to bed, it looks great (grate)! I have a sister living in Mot out of interest, a very agreeable little town indeed.