How can it all take so long?

Well, I dunno, but it does.  I have but a paltry collection of photos to show you: little indeed for the hours that I've been putting in during the three weeks since last I posted.  All I can say is that I've been working long days and there isn't much to show for it.  Still, one day I'll get there! 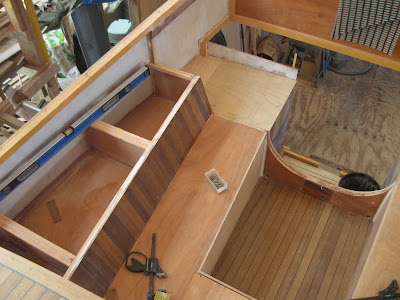 With the dividers filleted in place, I made framework for the lids/seats to land on.  As ever, things didn't go perfectly as anticipated, so there was a certain amount of sanding or filling to be done to get everything level so that the lids don't wobble. 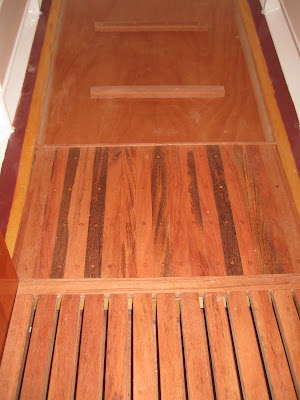 In the meantime, I finished off in the lazarette, making a removable sole panel which is at a little less of a steep angle than the bottom of the boat.  The idea is that it will be a little less uncomfortable to sit there when I am getting things out of the lazarette. 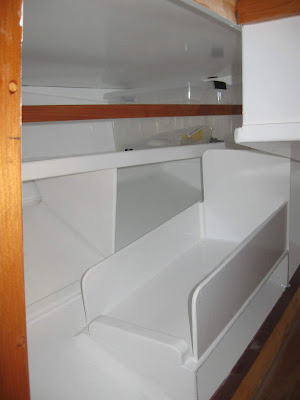 Belatedly, I recalled that I had intended to make a bar either side, to keep the boxes in place.  Actually, there is not much headroom for them and the fiddle on the shelf is quite high, so they are very unlikely to jump out of their own accord.  Still, if they can, they will!  It would have been a lot easier to fit before I closed in the cockpit! 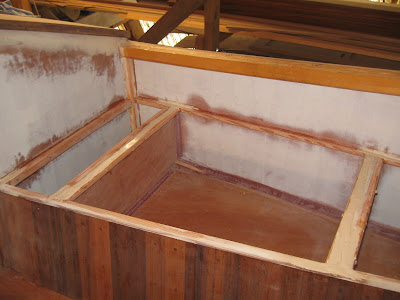 The seat framing is glued into place and the screw holes plugged.  (I often find it quicker to use wood plugs for screw holes than to fill them with epoxy.) 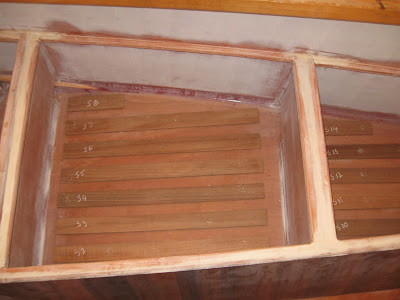 Before I painted the lockers, I cut up strips of decking for slats, in the hope of preventing things in the locker from standing in pools of water. 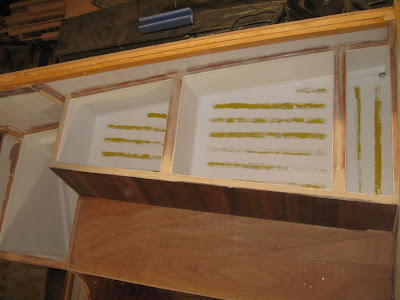 I then masked off for the slats and proceeded to paint the lockers with four coats of low-sheen, two-part polyurethane paint. 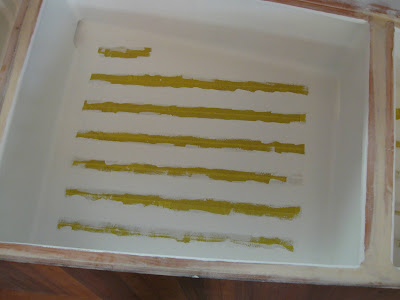 I stopped painting when the lockers looked white! 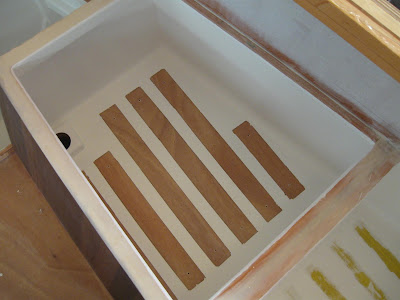 Pulling the masking tape off was a satisfying job.  The locker is now ready for the teak slats. 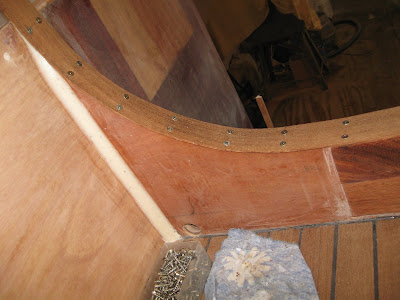 I am trying to fit a nice teak capping to the outboard motor transom.  My thicknesser stops at about 4 mm.  I sanded the teak some more, but it's still rather too thick to bend easily.  Using a silly number of screws and heating the teak with a heat gun, I managed to force it into place.  I will leave it there for a couple of days, but I have no great hopes that I will be able to glue it back in again without it breaking. 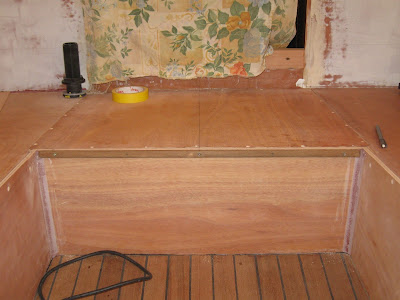 A little bit of teak trim around the cockpit gives a pleasant illusion of solid teak.  I happened to have a long length that I'd made up for the forward end of the centre deck, but which had broken when I tried to bend it too far.  It was made from recycled timber with old screw holes plugged.  This recycled timber will now be recycled again.  Teak is inconceivably expensive and I can't even consider buying any new. 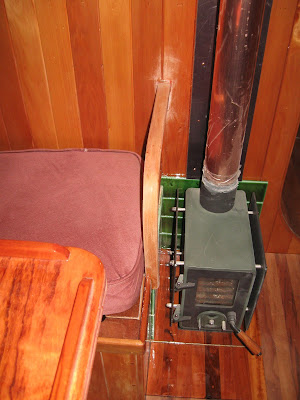 I don't think I've included a photograph of the little rail next to the fire.  It does a good job (assuming it doesn't delaminate due to the heat!), but is still awaiting the varnish brush. 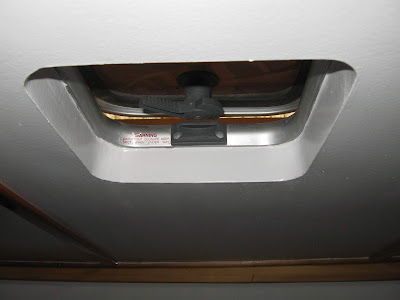 And finally, I have managed to paint around the galley hatch.  I was waiting for the final use of the low-sheen paint to do this.  I'm pleased I remembered - I don't see my using that paint again.  Which is a nice feeling!

Hi Annie. I've enjoyed reading about your build and have learned a great deal from you as you solve for cruising problems that I had never thought of. I just wanted to suggest that you could clamp a plank of wood to the bed of your planer, then run your thin teak strip over it to make it as thin as you like. It's like fooling your machine into thinking it's planing a thicker board. I've tried it In my shop and it has worked very well.

Thank you for that, but it's a trick that has already been suggested to me. Sadly, however, the 'combs' on my machine mean that I can't plane the wood any thinner than 4mm, regardless of what I do. I suspect that you have a rather more substantial and professional style of planer than I do!

Paint work looking very shiny from Sweden Annie! Is there any sanding between coats on that 2 part poly, or just re-coat within a set time? I tend to stay away from 2-part products on the basis of application and touch up issues, but the longevity of the paint sure looks worthwhile. Cracking job!

Generally, I don't have to sand between coats as long as I don't leave it too long. Thank you for your kind comment :-) Sometimes I sand it simply to get rid of dust and hairs. The shed is not the best place for doing good-quality paint and varnish, but the fact that the coatings are on and protecting the boat is more important than getting a perfect result. It will look fine, if I take my glasses off! The low-sheen paint I used for the deckhead and in the deck lockers can always be recoated, without any preparation apart from cleaning the dirt off, even after several years, according to the spec sheet.

I chose two-part for longevity - I don't find a problem applying them, but I confess to having a rather cavalier attitude to the fumes - as long as I'm only doing it for myself. I would guess that I might start using one-part paints on the topsides, as they get scuffed and scraped. One of the great advantages of the teak decks is that they don't require repainting!