It was a bit of an act of faith to go ahead with installing the foot well.  Once in place, it was going to be difficult to do anything else major in the lazarette.  I will have to run wires from the solar panels and possibly one for a stern light, but there is actually quite a lot of room to move about.  If you are a hobbit. 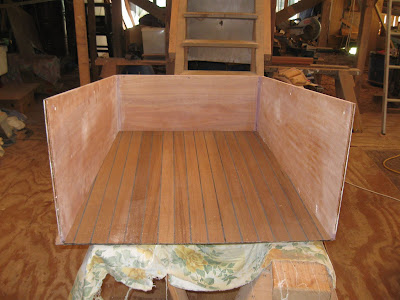 It was going to be quite a business getting the foot well into place without getting epoxy everywhere. I put the sole down first, on a small saw horse and some pieces of wood.  Then I used masking tape to force the sides towards each other, which made it a bit easier, but there was still a fair bit of epoxy to clear up. 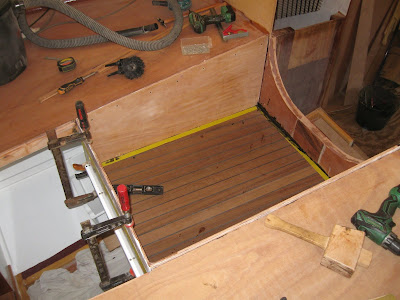 I had carried out this manoeuvre several times without too much difficulty, but as I have come to expect, it was much more recalcitrant once I needed it to go into place easily.  There was a lot of hitting with a mallet and bad language required to get it where I wanted. 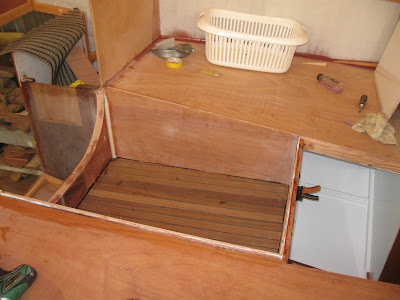 Finally it was screwed into place and the additional framing fitted around the base to give a large gluing area where sole and sides come together. 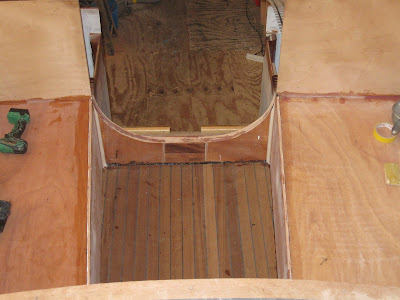 There are a few little gaps around the edge, but overall it went in reasonably well.  And the teak looks and feels very pleasant. 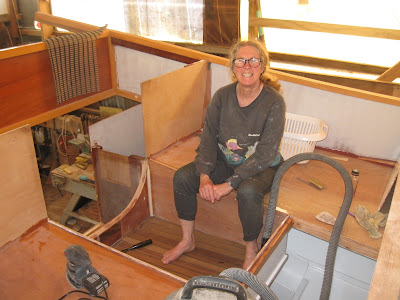 It's funny how large it looks until someone is sitting there.  However, my offshore instincts kept kicking in whenever I thought about the foot well, so I've ended up with a roomy after deck with lots of places to sit, but with a small well from which to steer. 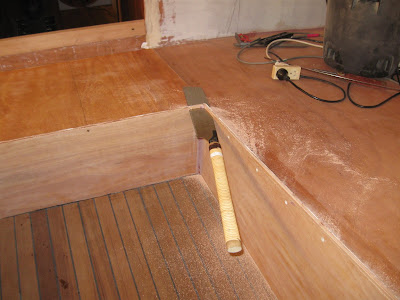 The next stop was to trim off the excess.  The plywood for the bridgedeck is yet to be glued down. I haven't quite finished the floor by the companionway and it's a lot easier to do things with natural light. 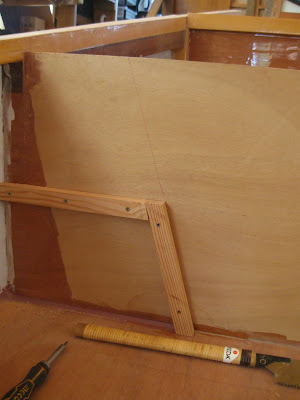 With the foot well in place, the next issue was getting backrests set up. Because my seating is at two levels, there was a certain amount of measuring and mocking up to be done to achieve what I wanted.  The well is wider that I'd have chosen, dictated by the cutout for the outboard motor so there was also the trade off between wider and more comfortable seats next to it, and being able to brace myself when the boat heels.  It will be nice to sprawl out on the seats at anchor, but as long as I don't get any fatter, I think I'll end up with something that works both sailing and in harbour.  I'm really pleased to have such a spacious cockpit, because it will be nice to have room for people to sit round in comfort. Cockpit backrests tend to end up a bit low for comfort because of the need to be able to move around and tend to the sails, but a closed-cell foam cushion helps make them more comfortable.  I spent a bit of time with various pieces of wood trying different combinations and finally hit of a compromise that seems to work. 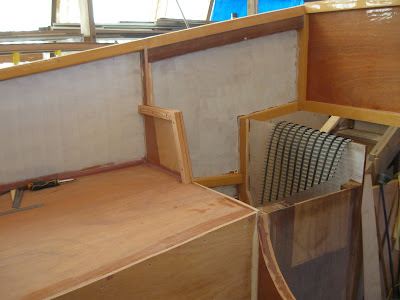 Finally, I could cut out the surplus bulkhead which has been puzzling my visitors for a long time.  It felt like a big step forward. 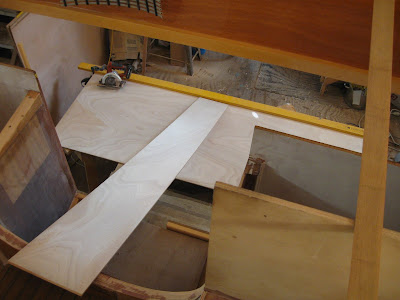 I then cut out a long strip of 9mm ply for the backrest, pulling it into place and trying it for size.  I also used the same strip to check that the upper seat was going to work.  It seems as though it will. 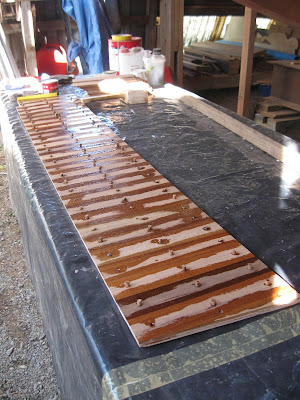 I have agonised for ages whether to go for painted backrests, or to have some nicely varnished teak.  In the end the teak won.  It didn't take that long to cut it up and stick it on and made good use of a heap of offcuts I had kicking about. 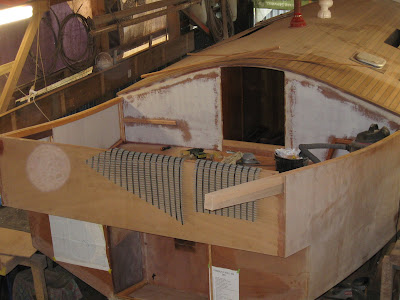 From above, the after end is finally starting to look like a boat. 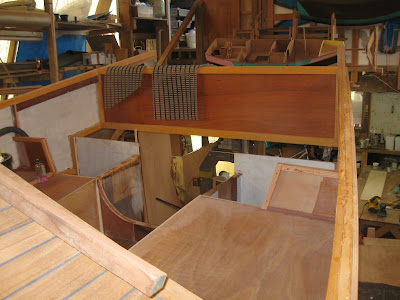 And here is a view with the other bulkhead cut down to size. 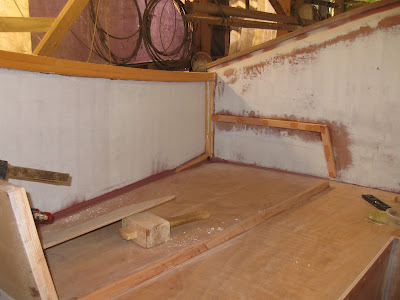 Both seats slope from aft forwards.  This is not only to ensure the water runs off, it also means that as you move aft you get a better view, which can be an advantage when you are coming in to pick up a mooring.  The sheer in the seats also reflects the (rather splendid) sheer in the bulwark and I love the overall feel of it. 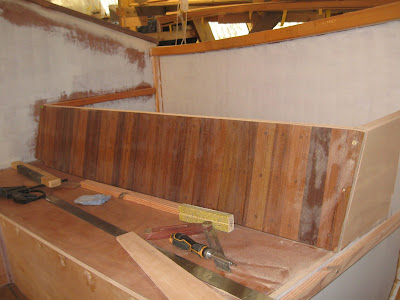 The backrests were another thing that have been in and out dozens of times while I fitted the framing along the top and checked and measured other things that needed to be considered.  There has to be space for the laundry basket, which appears in several photos: this will hold the kedge anchor, chain and warp and I want to be able to lift it all out and lower it into the dinghy, if needs be.  It's a lot easier to handle in a basket. 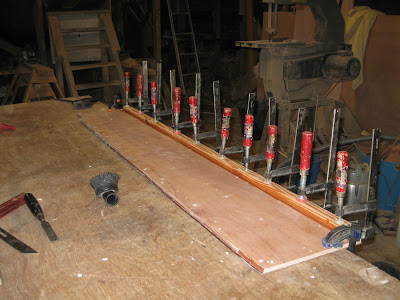 Fitting the framing along the top of the backrest.  This is for the locker lids to land on. 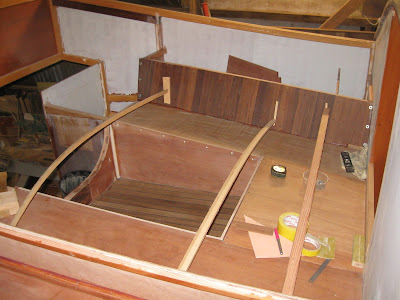 Finally, I could glue in the backrests.  I didn't want to screw through to the frame on deck, so I screwed the backrests at each end and used slightly springy lengths of wood to hold them firmly at the base.  The glue squeezed out in a very satisfactory manner. 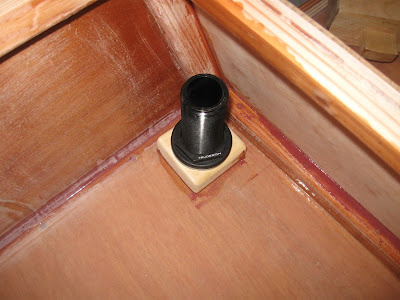 I've given a certain amount of thought to additional ventilation in the boat.  While the Air-only dorade that I fitted should be adequate most of the time, I am concerned that in winter, with the boat shut up against wind and rain and the fire lit, there won't be sufficient air coming into the boat.  I have added a sort of dorade arrangement within the deck box.  Under the locker top and well inboard, it would take a catastrophe for water to enter - and I would probably have more to worry about than a few litres of water in the lazarette at that stage.  I used skin fittings - the pipe is very strong and glues into place with epoxy.  I just put them in temporarily for the moment, to make it easier to paint out the lockers. 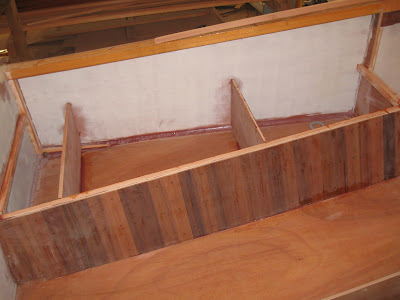 With the backrest in place, I could fit dividers for the lockers.  I used 12mm ply, to help stiffen up the deck.  The reason for their being so unsymmetrical is that the forward, smaller locker is there to take the tail of the sheet/halliard.  The middle one is for the kedge basket and as I don't know which side it will end up, I made it the same size both sides.

Now I need to paint the lockers, finish the aftermost ones, make lids, put down teak and, probably, put some teak slats in the lockers to reduce water being trapped by gear.

Hi Annie,
Always enjoy reading your blog. I am hoping to visit NZ this summer. Perhaps will have the opportunity to catch up.
Best regards,
Bob Williams
SY Sylph VI

I hope so. Whangarei is easy to find and Norsand Boatyard a favourite with yachties.