It all takes time


Having more or less worked out what I'm doing in the cockpit and cut out all the material, I've largely spent my time coating plywood.  Four coats of paint on each side (for some pieces) and with the cold weather preventing me from doing more than one coat per day: it all takes time. 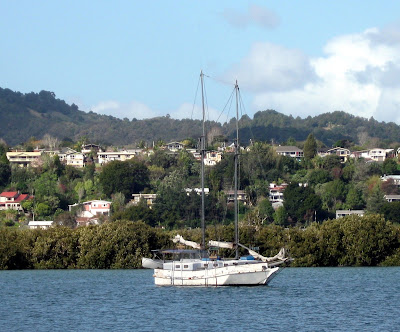 I did have the pleasant distraction of a winter junket, attended by fellow junkies and the good ships, Havoc (yet to be converted), 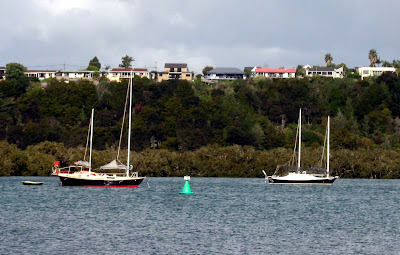 Freebie was there, too, which gave me a chance to get out sailing (it was a bit too gusty to be fun in the bigger boats.) 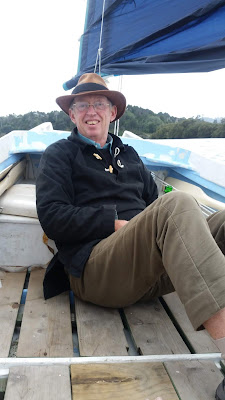 Alan from  Zebedee and Gordon from Tystie, also tried out both Freebie and Serendipity. 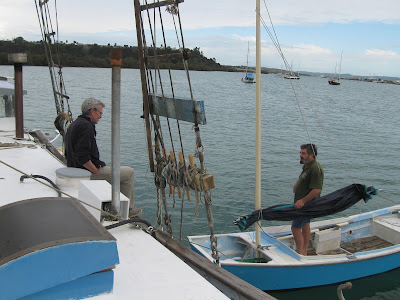 
and as bad weather made us decide to postpone the junket for a week, my shed took on its other role of JRA(NZ) Central.  Alan and Gordon took advantage of the space, temporarily to park stuff, or carry out one or two little projects.  I really enjoyed having their company and felt a little bereft when everyone went away again.  Still, it's all an extra incentive to me to get my boat finished and get back on the water myself. 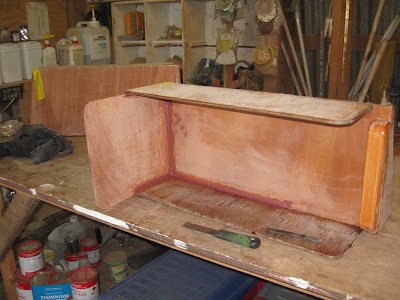 Meanwhile, I carried on with the cockpit - or more accurately, the space under the cockpit, which I call the lazarette.  I carefully made the boxes for the meths, only to find that one of them was - literally - a couple of mm too narrow.  I had to take the back off and fit it again with a filler piece.  Sigh. 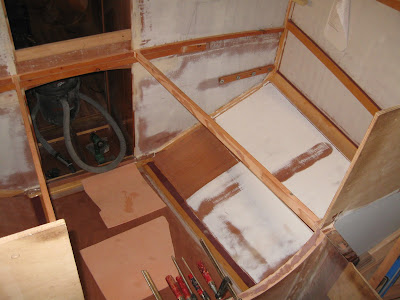 The simple task was to prepare the area for painting.  A lot of it was already sanded, so it shouldn't take long.  Hah! I spent at least four days, sanding, filling, touching up epoxy and sanding again.  I couldn't believe how long this little bit of "prep" took! 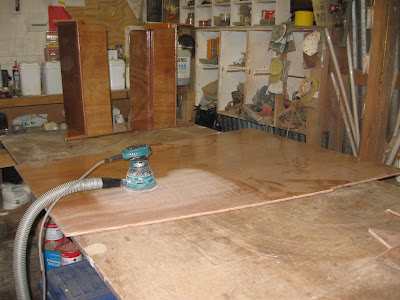 Of course, preparation isn't only the key to an attractive finish, it's the key to the coatings sticking and protecting the wood.  It is probably the most tedious aspect of building a boat; unfortunately it is also one of the most necessary.  So, after carefully spreading epoxy all over my plywood, I equally carefully sand some of it off again. 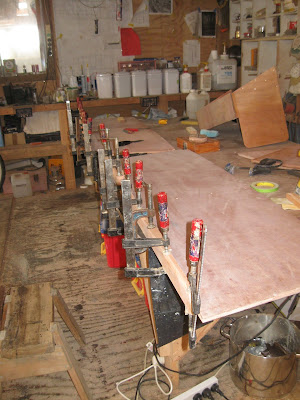 There will be two big shelves under the side decks, each holding four, 26l plastic boxes in which will be stored whatever it is I decide needs storing there.  I offered these shelves and the sidedecks (one of which is being sanded in the photo above) to their places in the cockpit, more times than I care to think about.  I was incredibly grateful if Gordon or Alan happened to be about when I was doing this: it made the job a lot easier. 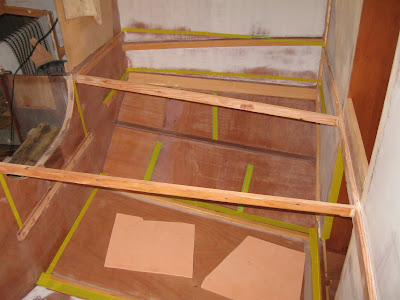 Finally, I masked everything up ready for painting.  The shelves will be filleted into place, as will the meths boxes, so I want to avoid painting in those spots.  The Carboline two-pack polyurethane is incredibly hard to scrape back, once it has cured. 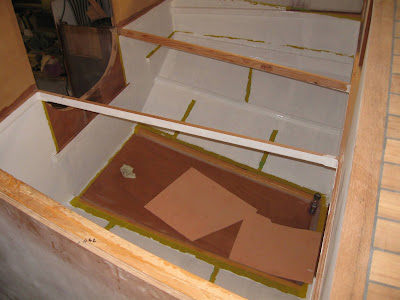 I may not like sanding, but I do enjoy painting, so I spent several happy hours with a half-sized mini roller and paint.  I find these cut-down rollers excellent for the fiddly sort of work I've been doing - they can get into really small spaces and it's rarely that I need a brush.  It also means that I can clean them out between coats, and keep them in a small pot of thinners.  They will last for months and months used like this.  The bits of closed cell foam on the bottom of the boat are a less-than-successful effort to stop me sliding slowly and inexorably towards the bulkhead.  I end up kicking my socks off to get a bit of traction on the slippery, sloping surface, but am worried about getting chilblains as a result. 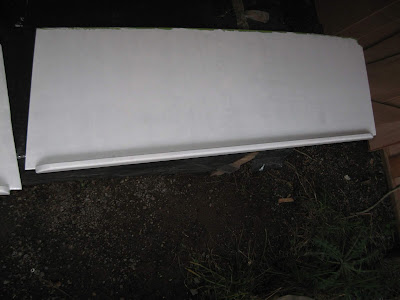 While the paint was mixed up, I coated the shelves for the boxes, 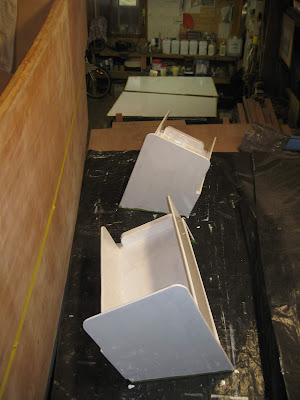 the boxes for the meths, 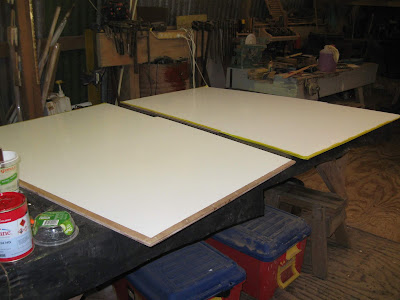 the side decks and the knees for the shelves. 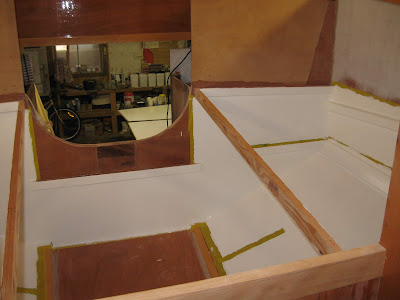 Yes, I know, the third coat really doesn't look that much different from the previous ones. 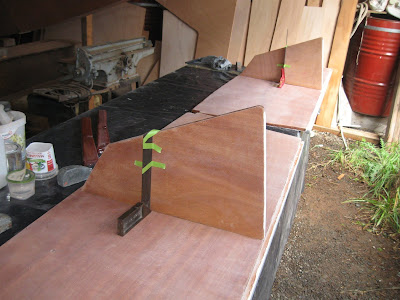 With the top of the shelves (and one side of the knees) painted, I turned the shelves over to fillet on the knees.  Taping them to a couple of set squares solved the problem of them wobbling about, while I applied the filleting mix and then waited for it to cure.  Which takes a long time in the middle of winter. 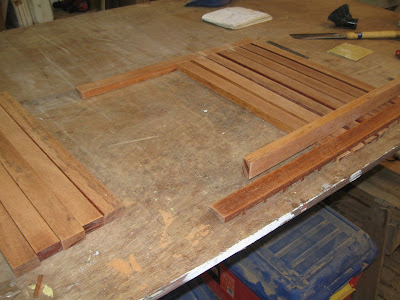 While waiting for paint - and glue - to dry, I set about making a nice little grating for the companionway.  The idea is that the drips from wet oilies go into this partitioned-off area of bilge rather than all over the saloon sole.  I sawed up tigerwood with gay abandon for this project. 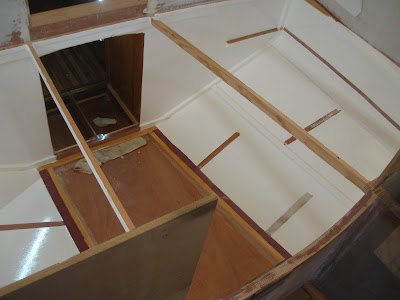 Finally, I finished painting the hull.  The white paint is very bright and shiny.  I want to be able to find things in this space, which will have no natural lighting. (The bit of towelling is to catch drips from the roof of the shed which land dead centre on the bottom of the boat!)

I am just about ready to assemble the various pieces, now.  That should look like some progress!